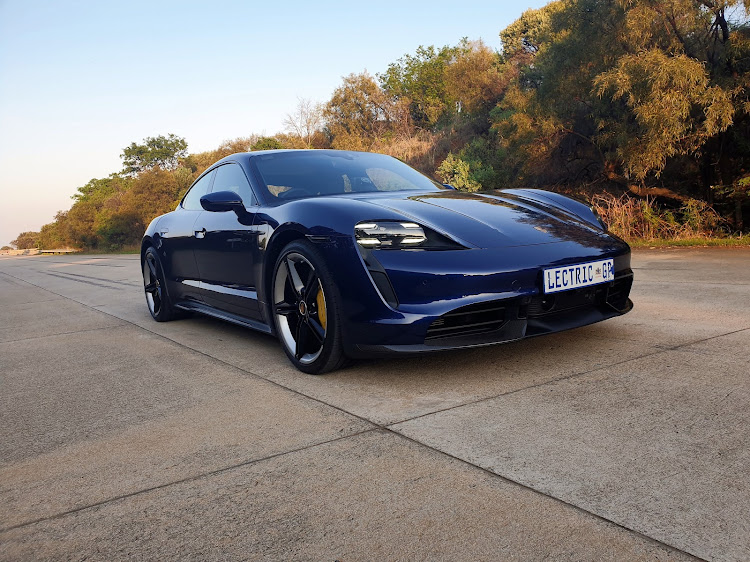 Aside from being silent, the Taycan Turbo S provides an authentic Porsche experience. Picture: DENIS DROPPA

SA is the world’s 12th-largest emitter of greenhouse gases and we are dependent on coal for more than 80% of our power.

Cynics will rightly point out that electric powered really means coal powered, and people who buy electric vehicles (EVs) primarily to curb global warming will have to wait for a holistic clean-energy ecosystem to find gratification. Even with many countries at the COP26 summit in Glasgow having pledged to reach net zero emissions, it will take a while before our skylines are dotted with wind farms and solar panels instead of smokestacks.

Early adopters buying EVs for their electrifying performance, on the other hand, will find more instant gratification. There are few experiences as immediate or reactive as thrusting the throttle in a battery-powered sports car.

In the Porsche Taycan Turbo S, pedal inputs are translated into outputs like flicking a switch.  There’s no waiting for engine revs to spool up or a transmission to downshift as in a petrol car.

There's no turbo in an electric car, of course, but Porsche has stuck with the petrol-type nomenclature to give customers an idea of what type of power to expect.

Before the Taycan Turbo S, the quickest accelerating car this publication had ever tested was the last-generation (991) Porsche 911 GT2 RS. Though it’s been discontinued as we await its 992 successor, to date it’s the most powerful petrol car from Zuffenhausen’s stable with its outputs of 515kW and 750Nm — and you can pick them up second-hand for between R4.9m-R5.8m.

Earlier this year the GT2 RS recorded a 0-100km/h sprint in 2.88 seconds and a quarter-mile of 10.53 seconds at the Gerotek test centre in Tshwane, using Vbox timing equipment.

Last week we returned to Gerotek with the Taycan Turbo S, Porsche’s most powerful EV, and its sprint figures were very similar: 0-100 in 2.87 seconds and a quarter mile of 10.77 seconds.

Those numbers, as impressive as they are, don’t do justice to the feel of accelerating so fast. It’s simply brutal. You’re pressed into your seat as if you’ve been hard-tackled by Eben Etzebeth.

The all-wheel drive Taycan Turbo S has two electric motors — one per axle — to produce a combined 460kW of power, which is briefly hiked to 560kW and 1,050Nm of torque when launch control is engaged.

But it’s the seamlessness of the Taycan’s energy rush that changes your perspective of high-performance motoring. There are no gear shifts; EVs don’t require gears because electric motors deliver power instantly, and don’t need to build up torque through revving as in internal combustion engines.

The step-free nature of the thrust becomes addictive. Getting back into a petrol machine afterwards — even a powerful sports car — can be a letdown as one is reacquainted with lulls and pauses, however brief.

Of course, there’s the vocal charisma to consider. The silence of the Taycan is in discord to the violence on offer, and though a simulated sporting sound can be selected with a switch, it’s nothing as soul-stirring as a high-revving petrol engine.

As for the practicality of ownership, the Taycan has about 400km of range in normal driving, which is about the same as the petrol GT2 RS, so range anxiety isn’t too much of an issue unless you’re planning long trips. On a public DC fast charger the electric Porsche can be juiced up to 80% in as little as 23 minutes or fully charged at home overnight with the supplied cable. 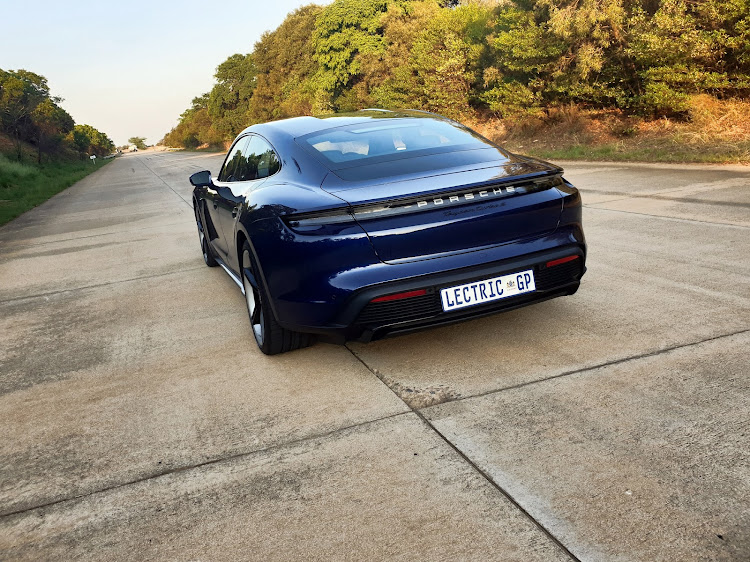 Running the Taycan is a lot cheaper as a full charge costs a lot less in electricity compared to about R1,300 in petrol to fill a GT2’s tank.

But, of course, there’s Eskom, and load-shedding puts a damper on the EV-owning rationale. Ushering this elephant out of the room for a moment (is that the drone of generators we hear in the leafy, sports car-owning suburbs?), the electric Taycan is a fine grand tourer that drives much like a true Porsche.

Wide tyres and a bag of electronic tricks — including rear-wheel steering and traction-enhancing torque vectoring — help this heavy 2.3-ton sedan slice corners like a much lighter car.

The batteries are mounted in the floor to create a low centre of gravity, making the big Porsche feel impressively pinned down during direction-changing pursuits.

It has a wafting ride too when the adaptive air suspension in its most comfortable setting.

It compares with the Porsche Panamera in terms of space and practicality, with a roomy four-seater cabin and generous boot space with cargo holds both front and back. 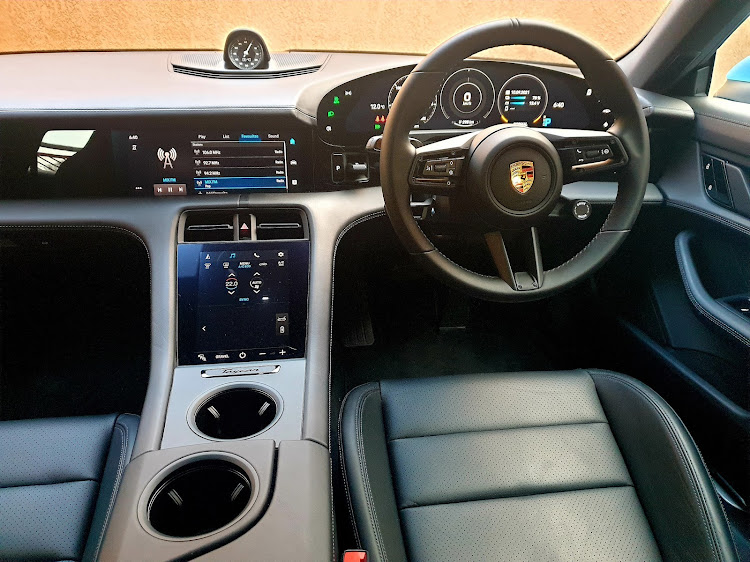 The spacious cabin presents digitised minimalism with its touchscreens and haptic-feedback icons, as per the modern trend. There are few physical buttons, and even the air vents are adjusted using the touchscreen.

Many auto firms are promising to achieve carbon neutrality by the 2030s or 2040s with all-electric car line-ups, and several countries will ban the sale of nonelectric vehicles. Africa will take somewhat longer to plug into the EV revolution, and the high prices of battery-powered cars coupled with our electricity woes make them an option for a handful of early adopters at present.

But for those adventurous souls, there is much to like about the R4m Taycan Turbo S, not least its ability to match the straightline performance of the most potent petrol car the firm has yet built.

Bugatti Rimac is a marriage of two technological trailblazers, with Porsche as a strategic partner
Life
4 weeks ago

We undertake a range-anxiety test by driving from Joburg to Durban in a Jaguar I-Pace, using not a drop of fuel
Life
2 years ago
Next Article