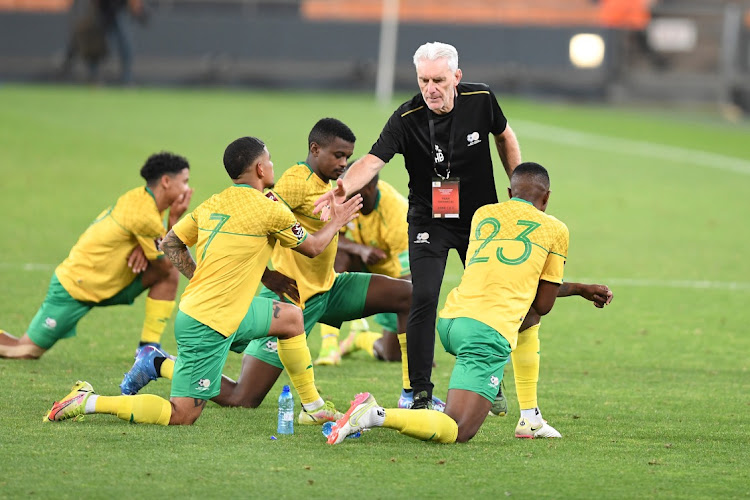 Bafana Bafana coach Hugo Broos interacts with players as they do stretching exercises. The team may find themselves playing against top-ranked European teams this year. Picture: LEFTY SHIVAMBU

The SA Football Association (Safa) is negotiating with European countries to play against Bafana Bafana in two high-profile friendly matches during the next international window in March.

Safa president Danny Jordaan, who is in Cameroon for the Africa Cup of Nations (Afcon) finals, said talks are ongoing with a few top European countries.

“There are negotiations with a few top European countries, but ... at present we are not able to share any details,” said Jordaan.

With SA having missed out on the African World Cup playoffs, despite their appeal to Fifa over the refereeing decisions in their last game, there is opportunity for at least two friendly matches in March.

Many European countries that have qualified for the World Cup are looking for opponents from other continents, who play a different style of football, to help them to prepare for the tournament in Qatar in November.

SA and the Ivory Coast are the best African options for March friendlies and have been approached as possible opponents by some European countries going to the World Cup.

For Bafana, it will be a major step up to play against leading European teams after years of belatedly arranged friendlies against less-fancied regional opponents. The largely inexperienced and young national team of coach Hugo Broos will also benefit from the opportunity and experience of playing against top countries.

SA last played outside the African continent on a two-match tour to Central America against Costa Rica and Honduras in 2015 and returned home unbeaten.

In 2012, the team went to Brazil for a friendly and in 2014 to Australia and New Zealand. Their last European trip was a 2012 friendly in Poland when then coach Gordon Igesund was starting out.