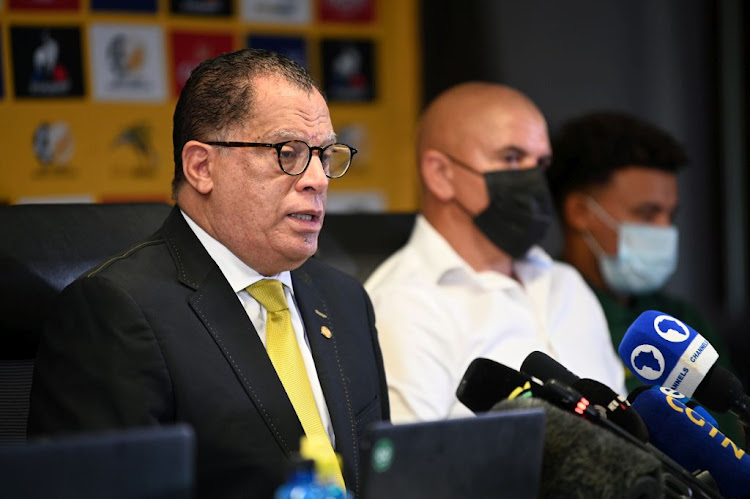 It has been several days since the Fifa disciplinary committee met in Zurich, Switzerland, to decide Bafana Bafana’s 2022 World Cup qualifying fate, and SA Football Association (Safa) president Danny Jordaan is not pleased that the world football governing body continues to give the nation the silent treatment.

The Fifa committee met on Tuesday to discuss Safa’s protest against Senegalese referee Maguette Ndiaye’s controversial handling of Bafana’s World Cup qualifier against Ghana in Cape Coast on November 14 and a frustrated Jordaan said on Sunday they are not happy that there has been no feedback from Zurich several days after a deadline Fifa set themselves.

“Fifa issued a statement saying they would give us a decision on November 23. What is the date today? It is November 28, isn’t it,” Jordaan said.“The question is why have they [Fifa] not even communicated with us? Why?”

Jordaan suspects the Fifa officials thought their meeting on Tuesday would be fairly straightforward and they assumed Safa’s complaint was solely based on the dubious penalty decision controversially awarded by Ndiaye against Bafana. Ndiaye bizarrely awarded the penalty after deciding Bafana’s Rushine de Reuck fouled Daniel Amartey inside the area when there was barely contact between the two players.

Referees are often given the benefit of the doubt in controversial instances like these and Fifa usually ends the debate by arguing that the match official’s decision is final.

But it seems the football governing body was stunned when Safa submitted a comprehensive list of documents in support of their claim that there may have been match-fixing involved. The documents included video analysis of the match officials’ performance, highlighting the blatant violation of the rules of the game on a decision-by-decision basis until the final whistle.

The protest also cast the spotlight on Ndiaye’s alleged brazen bias against Bafana. Former Fifa referee Ace Ncobo was asked by Safa to compile an independent report on the Senegalese match official’s conduct and was also not impressed by what he saw after studying the visuals. His report, which was handed to Fifa and the Confederation of African Football (Caf), shows that 90.9% of the incorrect decisions, of which there were an unusually high proportion, went against Bafana.

More damning evidence was submitted a few days ago, sending members of the disciplinary committee into such a tailspin that they have been uncharacteristically plunged into silence.

Jordaan said they are not happy that Fifa has remained mum and not bothered to share the progress of the contentious matter with the world.

“They must explain to people around the world that the matter is a lot more complicated than they originally thought and they need more time to consider their decision. Remaining silent for so many days without any form of communication is not the way to go here.

“The fact that they [haven’t announced a decision] means there are other issues at play here. We asked Fifa for a thorough investigation [into Ndiaye’s conduct]. Other people [who are not South Africans] have come forward and added more information.”

Jordaan said it is interesting to note that after the Ghana Football Association initially dismissed Safa’s complaint to Fifa and elected to attack the South Africans rather than the merits of the case, they have also gone silent.

“The statutes of Fifa say they must protect the integrity of their competitions,” the Safa president continued.

“So I think the matter has become more serious now. Ghana initially said our protest was frivolous. It is really strange that a federation attacks another in the manner they did. It is strange that they held a press conference and attacked Safa.

“But the thing is we never accused them of anything. We wanted the referee to be investigated.”

Safa want the referee to be banned from football and the match to either be replayed at a neutral venue, not in Ghana, or Bafana to be awarded the three points if the West Africans are found to have had knowledge of the Senegalese official’s activities.

Jordaan said Fifa have a considerable amount of resources at their disposal and they can either disprove their protest with supporting proof, or they can tell the world there is reason to believe that Ndiaye is at the centre of a match-fixing scandal.

Safa and their Ghana counterpart met in Cairo, Egypt, at the Caf general assembly at the weekend. But given the simmering tension between the two organisations, they elected to not engage as they have usually done in the past.