Streaming turns the tide as service wins more awards than any network, and Apple as well as Disney+ perform 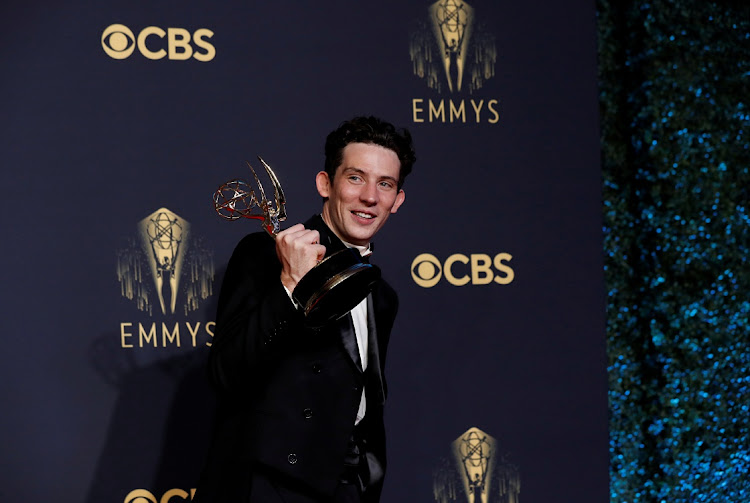 Actor Josh O’Connor poses for a picture with the award for outstanding lead actor in a drama series, for ‘The Crown’, at the Emmy Awards in Los Angeles, US. Picture: REUTERS/MARIO ANZUONI

Netflix’s “The Crown” won Best Drama Series at the Emmy Awards on Sunday night, giving the streaming industry leader the top prize on the TV industry’s biggest night for the first time.

A lush period piece about the British royal family, The Crown won Best Drama Series in its fourth season. It depicts Prince Charles’s romance with Princess Diana, and his affairs with Camilla Parker-Bowles, his future wife. The show also won the prizes for Best Writing and Directing of a Drama Series, as well as all of the four acting awards.

The Emmy Awards were a reminder of just how much the industry has changed since Netflix released Lilyhammer, its first original series, in 2012. Netflix won more awards, 44, than any network. Apple, which makes most of its money selling smartphones and tablets, won more awards than any major broadcast network. Disney+, a streaming service that is less than two years old, won more than ABC, once the flagship of their owner Walt Disney.

This breakthrough for streaming perpetuated Hollywood’s ongoing failure to diversify its ranks of writers, directors and actors. Almost all of the winners were white, and no person of colour spoke as a winner until nearly two hours into the show, when Ru Paul took home an award for Outstanding Competition Program. Paul was followed shortly by Debbie Allen, who won the Governor’s Award.

The Emmy Awards, given by the Television Academy, are considered the highest honours in the TV business. The show is not watched by as many people as the Oscars or the Grammys, and awards programmes in general have been losing viewers in recent years. Still, the wins can provide a publicity boost, particularly for new services looking to acquire subscribers and attract talent.

Netflix has spent hundreds of millions of dollars chasing awards ever since House of Cards, its first show to receive universal acclaim. It has plastered Los Angeles with billboards, hosted public events and mailed stacks of DVDs to voters.

The company has earned more than 100 nominations in the past four years and competed with HBO to secure the most wins. Yet it had never won the top prize in any category, which many Hollywood executives took as a sign of the industry’s reluctance to embrace the streaming outsider.

Peter Morgan’s show about the British royal family had been nominated for Best Drama Series for its first three seasons. Produced by Sony Pictures and Left Bank Pictures, the series is one of the most expensive productions on television, costing upwards of $10m an episode. The money is evident on screen in the ornate costumes and sets.

The Crown edged out Disney+’s The Mandalorian, as well as another Netflix show, the romance drama Bridgerton. While The Mandalorian did not win any of the top Emmys, it did fare well at the Creative Arts Emmys, which took place last weekend. The show won prizes for music composition, stunts and visual effects.

Apple started the night as a big winner with Ted Lasso, its comedy about the US coach of a British soccer club. The show was named the year’s Best Comedy Series, and won four of the seven comedy awards. Star Jason Sudeikis won the prize for Best Actor and co-stars Hannah Waddingham and Brett Goldstein earned Best Supporting Actress and Actor, respectively.

The show was nominated for 20 Emmys, the most yet for a first-year comedy. It is Apple’s first big breakout hit in terms of critical plaudits, social media conversation and industry prestige, and the wins on Sunday night should drive more customers to Apple TV+, the iPhone maker’s paid streaming service.

Produced by Warner Bros.’ TV studio, Ted Lasso just concluded its second season and has been renewed for at least one more.

Many Hollywood figures have expressed scepticism about Apple’s foray into entertainment. It has not acquired a catalogue of shows to fill out its library for Apple TV+, and it has been wary of igniting controversy with its programmes. Yet the company dominated one category at the TV industry’s biggest annual gala less than two years after introducing the service.

“It was this cultural moment and gave people something to talk about other than a global pandemic,” Winslet said during her acceptance speech.

HBO also won for Last Week Tonight, its topical news show, and I May Destroy You, a limited series about a woman struggling to process her sexual assault.

Comedian Cedric the Entertainer hosted the show, which aired live on both CBS and Paramount+. The academy put on an in-person ceremony at the LA Live entertainment district in downtown Los Angeles. Last year, the academy held a smaller ceremony, delivering the statuettes to winners at their homes.

“They said this was outdoors; it’s not,” actor Seth Rogen joked in presenting the first award. “Why is there a roof? It’s more important we have chandeliers than we make sure we don’t kill Eugene Levy.”

Nona Gaprindashvili has filed a $5m defamation lawsuit against Netflix over a line in the hit series, which her lawyers say is false and sexist
Life
8 months ago

An uplifting family story, British Empire drama, strangers coming together, untold sports stories and all the Emmy content in one place
Life
9 months ago

What’s in store for this year’s Emmy Awards?