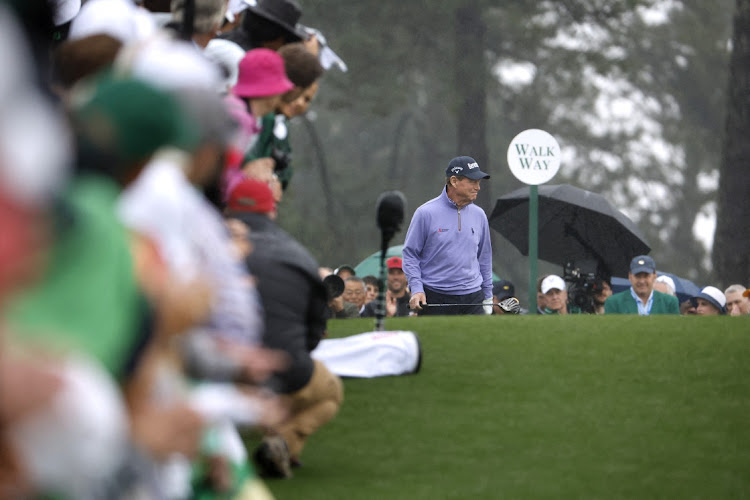 Tom Watson of the US on the 1st during the ceremonial start on the first day of play of the Masters at Augusta National Golf Club on April 7 2022 Picture: REUTERS/JONATHAN ERNST

The last of overnight storms delayed the ceremonial start by 30 minutes with Player followed to the first tee by 18-time major winner Jack Nicklaus and Tom Watson, who stepped into the honorary starter role left vacant by the passing of Lee Elder, the first black man to compete in the Masters.

But the dreary weather could not dampen the buzz or expectations, as golf fans lucky enough to have secured one of sport's most coveted tickets moved quickly to stake out their places around some of the sport’s most famous holes and wait for the man of the moment, Woods, to appear.

Enthusiasm for the year’s first major has soared since Woods on Tuesday announced that he not only planned to play the Masters but believes he could win a sixth Green Jacket just 14 months after doctors considered the possibility of having to amputate his right leg.

The Masters officially began with Spain’s Jose Maria Olazabal first off at 2.30pm SA time but for most of the spectators and millions watching on television it did not start until Woods steps on to the tee.

After two years of Covid-19 restrictions limiting the number of spectators, it seemed like old times at Augusta National as huge galleries washed over the course.

While the focus is on Woods there will be a galaxy of golfing stars for patrons to choose to follow, including betting favourite Spaniard Jon Rahm and Northern Irishman Rory McIlroy, who again will seek to complete the career Grand Slam with a Masters win.