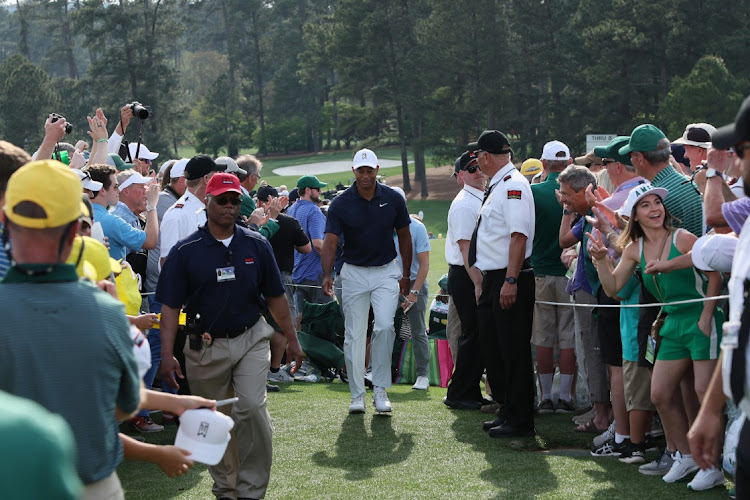 Tiger Woods of the US walks off the ninth green during a practice round at Augusta National Golf Club on Tuesday ahead of The Masters starting on Thursday, April 7 2022. Picture: MIKE SEGAR / REUTERS

The Masters is always something special but add in a Tiger Woods comeback and the end of Covid-19 restrictions and 2022’s first Major is turning into a golfing celebration.

After Covid-19 limited the number of spectators allowed at the grounds over the past two years, the galleries are back in full force and so is the unmistakable Augusta National buzz amplified by the presence of Woods on the manicured fairways.

Everyone entering stately Augusta National can sense the difference. The azaleas seem to smell a little sweeter, the Pimento cheese sandwiches a little tastier and the traffic a lot busier.

“You can feel it. A lot of it is Tiger,”  said Spain’s Jon Rahm, the world No 2 and betting favourite to walk away with the coveted Green Jacket on Sunday.

“I was playing with Tony Finau on the front nine. We were on seven, and they [Woods’s group] were walking down on two, and I’ve never seen a mass [of spectators] this big, even on a Sunday in contention, on those two holes. There’s a lot more electricity in the air.”

The first day of official practice on Monday offered a glimpse of what to expect from the week ahead.

Tigermania is set to return after Woods confirmed on Tuesday he will play the Masters 14 months after a car crash that nearly resulted in doctors amputating his right leg, setting the stage for what could go down as one of sport’s greatest comebacks.

“It was unbelievable,”  said Justin Thomas, who joined Woods on his Monday practice round with Fred Couples.

“I had a couple of buddies send me some pictures last night, and that’s probably more people than have ever watched me play a round at Augusta National and they weren’t there to watch me.”

If returning from a devastating injury was not enough, Woods upped the ante by putting himself in an even bigger spotlight, saying not only is he ready to play but is capable of winning a sixth Green Jacket. Not even his fellow golfers are betting against him.

“I wouldn’t be surprised,”  said Rory McIlroy, who will be hunting a first Masters title that would see him complete the career Grand Slam of all four Majors. “He’s hitting it well. He’s chipping well. He’s sharp. It’s just the physical demand of getting around 72 holes here this week. So would I be surprised? No, I’m not surprised at anything he does any more.”

Woods has not competed on the PGA Tour since the November 2020 Masters, his decision to return this week ensuring great theatre to bring the curtain up on the Majors season.

Certainly the 15-time Major winner could pick no better place for a comeback than Augusta National. Woods has made 23 Masters appearances and has a locker packed with Green Jackets, the last coming in 2019 when after years of surgery and personal problems against all odds he managed to end an 11-year Majors drought.

“Delighted to hear Tiger is going to give it a go at the Masters,”   Jack Nicklaus tweeted. “While he’s in a different place in his life, Tiger wouldn’t tee it up if he didn’t think he could compete and win. Tiger knows this golf course like the back of his hand and, in 2019, once in position, he remembered how to win. If his body holds up, could he do it again?”