Supersub Baptiste Serin steers shambolic France to win over US 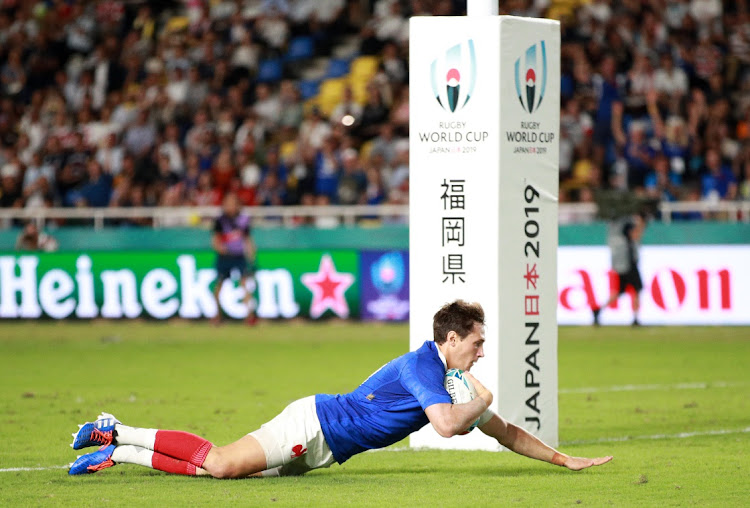 Fukuoka — Scrumhalf Baptiste Serin scored a try to set up another with a stellar game off the bench as Les Bleus scrambled to an unconvincing 33-9 win over a gallant US at the World Cup on Wednesday.

With the US within three points of the panicky French going into the last quarter, Serin’s late salvo helped save their blushes on a humid night at Fukuoka Hakatanomori Stadium.

Setting up Gael Fickou with a third try for France, Serin then scored one of his own in the 70th minute to secure the bonus point. Replacement prop Jefferson Poirot grabbed a fifth and final try for France at the back of a maul as the Americans tired.

The bonus win put France second just behind England in Pool C ahead of Les Bleus’ third match against Tonga in Kumamoto on Sunday, but Eddie Jones’s side may have few concerns after this French performance.

Captained by veteran No 8 Louis Picamoles, France started with 12 changes from the side that won a cliffhanger against Argentina in their opener last week, with coach Jacques Brunel opting for experience over youth in key positions.

Yet for much of the match they played as if they barely knew each other, with only the pinpoint kicking of Camille Lopez a threat to the Americans’ defences. A deft dink from the wily flyhalf in front of the posts set up winger Yoann Huget to run onto the ball and cross for the opening try in the sixth minute. He later found his other winger Alivereti Raka sprinting to the right corner with a sumptuous cross-kick for their second try in the 24th minute.

Between those scores, there was little to buoy frustrated tricolour fans as passes were spilt or flew wide and it was instead the Americans who were driving forward as they capitalised on French indiscipline.

They had their first points after 20 minutes when AJ MacGinty slotted a penalty after the French collapsed a lineout drive. The flyhalf kicked a second on the half-hour and the French were fortunate not to draw yellow for repeated offsides as they defended on their goal line.

A forgettable 10 minutes for the French ensued, with a rash of botched lineouts and breakdown failings. It scarcely grew better after the break, the Americans winning turnovers metres from their try-line and France’s outside centre Sofiane Guitoune bombing a near-certain try after charging into the 22 only to send a 40m pass drifting forwards to the unmarked Raka on the touchline.

With the Americans refusing to buckle, panic set in and another fumbling effort at the breakdown allowed MacGinty to knock over another penalty to put the Eagles within three points. It took Serin to stop the rot and his decision-making proved key.

He hurled the ball wide from a ruck 5m from the line and Fickou celebrated his 50th cap by bursting through two defenders to score in the 67th minute. Moments later, Serin scampered away from the wearying Eagles to seal the match and cap a brilliant cameo.

Eagles can soar like Japan, says US rugby coach

Eagles can soar like Japan, says US rugby coach