The side continue to earn less than Bafana Bafana, despite outperforming them 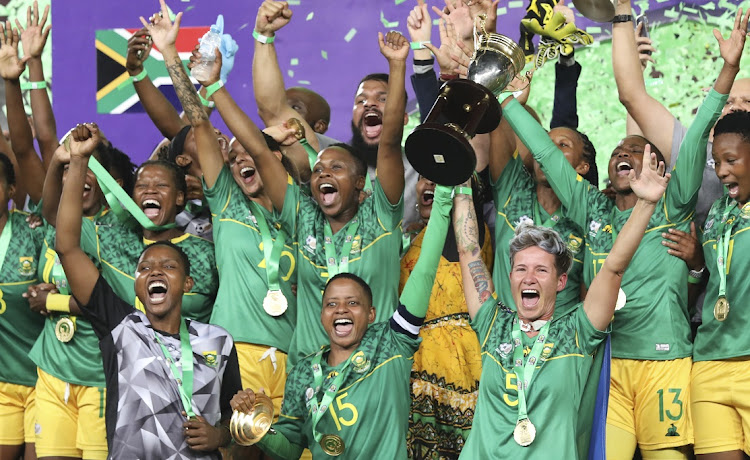 Banyana Banyana captain Refiloe Jane says the team hopes winning the 2022 Women’s Africa Cup of Nations (Wafcon) can speed up the process of equalising pay for the women’s national team.

Banyana take home R9.2m — R400,000 per player, which was the incentive offered by the SA Football Association (Safa) for winning the Wafcon — after their heroic 2-1 final victory against hosts Morocco in Rabat on Saturday night.

But the side continue to be paid less than Bafana Bafana, despite Banyana outperforming the men’s national team, who have battled to qualify for tournaments in the past two decades.

“All these years we’ve been pushing and fighting for change and you can also see the strides women’s football has been making,” Jane said after the final in which Banyana silenced a packed Stade Prince Moulay.

“And also the successes for the clubs and for the national team. So we kept on doing our job and hoping we can get the recognition we deserve. And also hoping with this win that things are going to change back home with regards to women’s football.”

Jane said having three strong captains in the squad — Janine van Wyk, goalkeeper Andile Dlamini and Jane lifted the trophy together — was part of the reason for SA’s success in Morocco.

Asked if she could have imagined becoming the first Banyana captain to lift the Nations Cup trophy and starring for AC Milan, the classy central midfielder said: “I would like to say yes.

Out of the camera directly to your eyes. 🤩

“When I got my first call-up I knew that one day I would get to this point. I’m very grateful and humble for the opportunities I have received throughout the years in the Banyana setup.

“And being the leader today is from a combination of hard work, sacrifice and we don’t disregard the hard work other people have put forward.

“Having different leaders in the team meant a lot. It’s not a one-man show. And I think you saw too when we went to lift the trophy there was three of us as captains.

“So it’s a collective effort, not a one-man show.”

Jane said the Wafcon victory means she can relax to some extent in her club career, but it also adds expectations at Italian giants Milan. “I think I will keep on growing. I can relax after this, though now there’s also more pressure to keep delivering.”

At the same time Banyana coach Desiree Ellis and Jane say their triumph should be enough to sway the SA corporate world to invest in women’s football. It is an open secret that big domestic companies have not been keen, with Sasol the sole exception as Banyana backer for years.

Ellis wants Banyana’s success to open doors to sponsorships. “We’ve always asked for more companies to come on board but now we have this,” she said, showing her Wafcon gold medal. “So now we’ve got a lot of people behind us. Now it’s really time for women’s football to be sponsored fully in SA.”

Jane shared the same sentiments. “Now we’ve shown with results. We’ve been on the rise. After today [Saturday], I don't think there’s any better moment for the SA corporate world to come on board. This should be the game-changer in SA women’s football,” she said.