The state is simply not in a position to drive a developmental agenda, and it is good to see this tacitly recognised 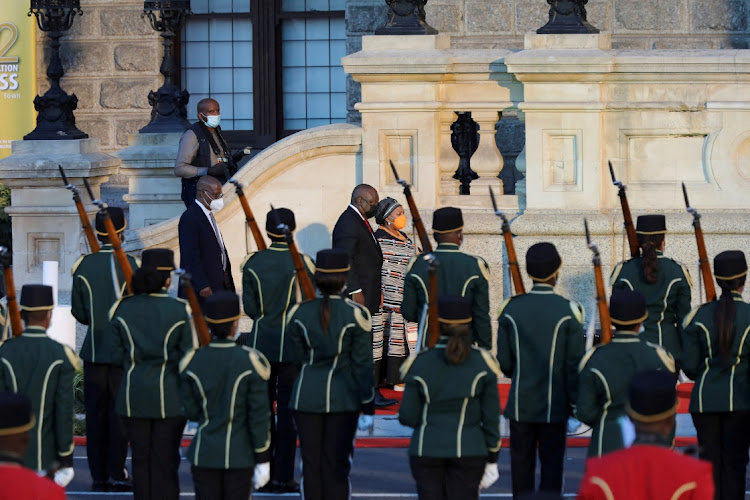 President Cyril Ramaphosa walks past members of the presidential guard of honour ahead of delivering the state of the nation address in Parliament in Cape Town on February 10 2022. Picture: REUTERS/SHELLEY CHRISTIANS

Rhetorically at least, President Cyril Ramaphosa’s state of the nation address (Sona) was surprisingly positive and pragmatic. The stress on the need to make the private sector take the lead in SA’s economic rehabilitation is especially welcome.

“We all know that government does not create jobs. Business creates jobs,” he said at one point. “This should be a new consensus which recognises that the state must create an environment in which the private sector can invest and unleash the dynamism of the economy,” he argued at another.

“The key task of government is to create the conditions that will enable the private sector — both big and small — to emerge, to grow, to access new markets, to create new products, and to hire more employees,” he remarked elsewhere.

This probably reflects less a policy turnaround than a compromise with pragmatism. The state, crippled to the point of dysfunctionality, is simply not in a position to drive a developmental agenda. It’s good to see this tacitly recognised.

Measures such as reducing red tape — not new, and long overdue — are to be welcomed. So is the president’s claimed commitment to build a “capable state” — an asset to any society. (It says a great deal about the past decades, and nothing praiseworthy, that a programme to “professionalise” the civil service is being undertaken.)

The question is whether this will (or can) be parsed into action. For, as the Zondo state capture commission has shown, much of the action that defines government's performance takes place out of the public eye, often in the sanctums of the governing party.

If meaningful pro-business reform is to be forthcoming it will be because ideological resistance has been overcome. If the state is to operate as an effective institution, it will be because a thoroughly new ethos has been inculcated in it. Both will necessarily imply changes to what have thus far been non-negotiable policy and practices.

Empowerment policy will need to be radically altered; cadre deployment forthrightly abandoned for the abomination it is. Much of what constitutes “transformation” will need to be fundamentally rethought.

Indeed, the pending introduction of new employment equity quotas will be a test case of this. If this is pushed ahead it will indicate that the president’s words were largely rhetorical.

In his speech, Ramaphosa said trade-offs would be necessary. It remains to be seen whether the reformist repertoire extends to doing so.

In his Sona, the president said legal amendments will enable a competitive market for electricity generation and the setting up of an independent ...
National
6 months ago

Expectations are high, but the president has little wiggle room in a depressed economy
National
6 months ago
Next Article

State moves to set up holding company for certain parastatals

State moves to set up holding company for certain parastatals