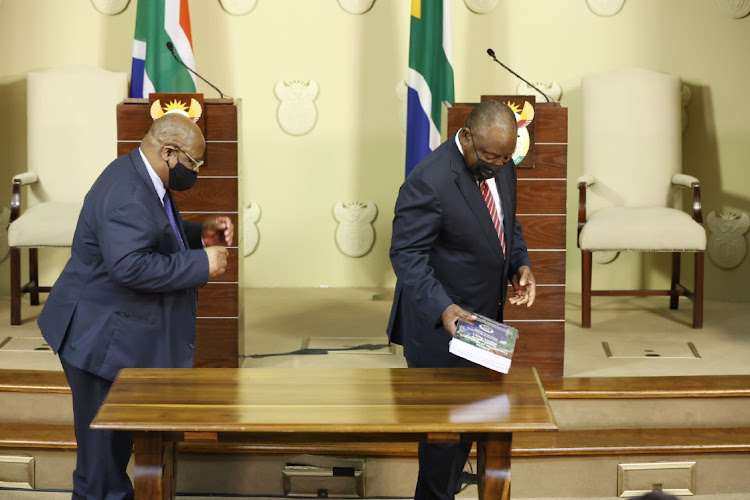 State Capture commission chair Raymond Zondo hands over part one of the state capture report to President Cyril Ramaphosa at the Union Buildings in Pretoria in this file photo. Picture: THULANI MBELE

The release of part one of the state capture commission’s report has given us a detailed account of the exploitation and abuse perpetrated against specific state-owned enterprises and public entities. Much of the attention has been directed at identifying the individuals who were complicit in these processes, and the prospects for pursuing legal action against them.

It is easy to become fixated on the report’s detailed narratives about the shenanigans that took place at specific institutions at particular points in time. But the larger story of state capture concerns how the damage inflicted on these institutions reverberates across the wider public sector, reflecting a systematic breach of ethical norms to which all public institutions could be potentially vulnerable. Therefore the commission’s report offers a cautionary tale for efforts to build and maintain more robust ethical firewalls across the public sector.

There are four lessons the public sector should heed from the commission’s exposé of the extensive ethical damage inflicted by state capture. The first concerns the use of external consultants/advisers to carry out a range of technical and financial services.

Outsourcing professional services has long been a recommended practice in certain public sector reform models. This was initially driven by efforts to enhance the quality and reduce the cost of delivering public services, which were traditionally delivered by state bureaucracies considered slow, wasteful and incompetent.

The commission’s report reveals how the outsourcing of professional services to consultants generated the opposite effects: stripping state institutions of their internal capacity to perform, duplicating work based on erroneous grounds, and disincentivising internal capacity-building efforts.

It also impeded the application of internal oversight checks, inflated the cost of delivering public services, and in some cases exposed the complicity of outsourced service providers in capture. Examples included the appointment of a transaction adviser and the McKinsey Regiments Consortium (SAA), Bain consultancy services (SA Revenue Service), and McKinsey, Regiments and Trillian (Transnet).

Although government has in the past criticised the public sector for the excessive and costly use of consultants, the commission revealed instances in which external consultants were essentially used as a Trojan horse by state captors to access the coffers of state institutions through a web of dubious transactions.

The commission also described many examples of how the process of procuring goods and services at state institutions was manipulated and flouted, and included instances in which seemingly legitimate processes were later overturned.

Procurement irregularities are not a new issue for South Africans, who have for years become accustomed to hearing how politicians and their external associates personally benefited from government contracts. What the commission succeeded in doing is not simply highlight who stood to benefit from the fixing of tenders, but the disproportionate extent to which the contracts generated very little if any operational value and public benefit for state institutions, even under the pretence that they were otherwise contributing to the mandate of these bodies.

A prime example of this was the various Gupta-linked The New Age advertising and sponsorship contracts, including a host of what appeared to be media white elephant events that were devoid of any sensible and rational cost-benefit considerations. Other examples included the LSG Sky Chefs and Air Chefs lounge catering contracts, as well as the FDC debt consolidation contract at SAA.

The commission highlighted several instances of political meddling in the operational affairs of state institutions. As with the endemic problem of procurement abuses, political interference has been a long-standing problem in the state, which has often been linked to party political patronage-driven appointments in government departments.

What the commission revealed, however, was a more insidious and fractious form of interference in human resource processes motivated not simply by dispensing patronage, but by deliberately placing or removing particular individuals in particular roles to facilitate capture from the inside. This produced considerable collateral damage by undermining morale and destabilising the operations of state institutions.

Examples included the dual transfers of Themba Maseko out of the Government Communication Information Service (GCIS) and Mzwanele Manyi into the GCIS; the “purging” of senior officials in the SA Revenue Service; and various instances of interference in executive appointments and dismissals at SAA to facilitate the board’s increasing encroachment into operational matters.

The final lesson the commission’s report offers to the public sector is the heightened risks and active discouragement of whistle-blowing in the state, despite legislative protections (such as protected disclosures) to prevent occupational detriment. Despite these risks there were many instances documented in the report in which officials were prepared to risk their careers, reputations as well as their personal safety and that of their families to highlight wrongdoing, and other cases in which they had little choice because of brazen attempts to “out” these individuals or orchestrate their removal by tagging them as whistle-blowers. This was particularly prevalent at SAA.

Even before the tragic killing of Babita Deokaran in 2021, the evidence led during the commission’s hearings revealed not only the continued risks to whistle-blowers, but a failure to institutionalise and normalise the practice of whistle-blowing in the public sector. There remains a large gulf between progressive legislative protection for whistle-blowers and the harsh realities on the ground.

Part one of the state capture commission’s report makes for sober reading, not just for the specific state-owned enterprises and public entities that were at the centre of the story, but for hastening our efforts to protect the wider public sector system in which they operate.

• Naidoo is with the department of political studies at the University of Cape Town.

The consulting firm was present for every step of the dismantling of Sars, from conception, to collusion, to capture
Opinion
2 weeks ago

HILARY JOFFE: Bain made little from state capture, but lost billions for Sars and SA