Ramaphosa concedes violence is being fuelled by economic grievances 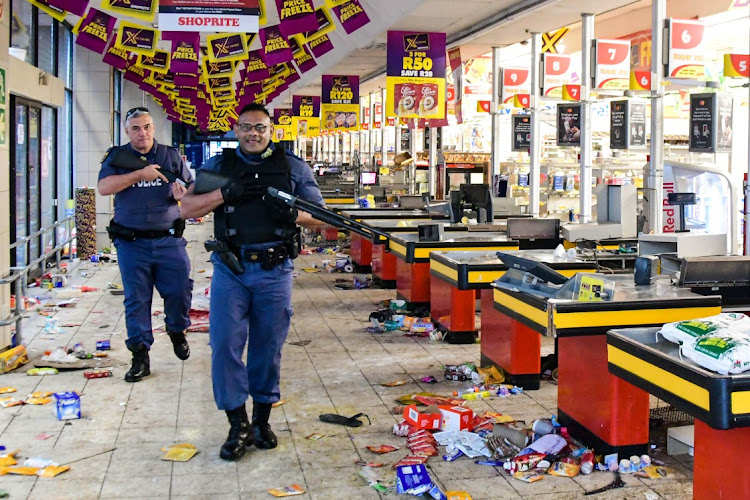 Police search for looters in a ransacked Shoprite store in central Durban on Monday . About 10 people have died while 166 suspects have been arrested in KwaZulu-Natal and 300 others in Gauteng since violence erupted on Friday. Picture: GALLO IMAGES/DARREN STEWART

In a sombre but gentle tone, President Cyril Ramaphosa has appealed to South Africans to consider the consequences of their actions and stop the wholesale looting and the trail of destruction.

“We are therefore mobilising all available resources and capabilities to restore order,” Ramaphosa said in a televised address on Monday. “Let me be clear: we will take action to protect every person in this country against the threat of violence, intimidation, theft and looting.”

His televised address came as he ordered the army to help the overwhelmed police contain violence that left a trail of destruction in several townships in KwaZulu-Natal, Gauteng, Mpumalanga and the North West following the conviction and arrest of former president Jacob Zuma.

The so-called pro-Zuma protests erupted on Friday, hours after the former leader handed himself over to the police to start serving a 15-month sentence for defying a court order. But the sporadic protests swelled into mobs that descended on shopping centres, smashing windows, setting commercial buildings ablaze and looting.

The president admitted that though the protests began under political mobilisation, they had expanded to include socioeconomic issues such as unemployment and crime, which had been a ticking time bomb for the country.

With police outnumbered by the roving mobs, terrified residents stood as a last line of defence against protesting mobs entering suburbs in Durban, en route to the homes of private citizens.

Some Covid-19 vaccination sites and clinics in Gauteng and KwaZulu-Natal were closed due to safety concerns, while some retailers kept their shops closed as they tallied losses from the violence that has left at least 10 people dead.

“Even as we know the high costs of this violence ... the loss of human life is the greatest cost of all,” Ramaphosa said.

The violence may be threatening SA’s food and health security. The country’s Covid-19 vaccination drive is likely to hit a snag just as it was beginning to gather pace after disruptions related to the supply of the vaccines.

“This will have lasting effects on the progress we have made on our economic recovery as well. These disruptions will cost lives by cutting off supply chains that sustain our food and health production systems,” Ramaphosa said.

He said some health personnel had stayed away from their facilities due to safety concerns, further hampering the vaccination rollout, which is critical to contain the spread of Covid-19.

“What we are witnessing now are opportunistic acts of criminality merely as a cover for looting and theft ... there is no political cause that can justify the violence that we have seen in Gauteng and KZN,” he said.

It’s not the first time the government has deployed the SA National Defence Force, which has a long-standing agreement that puts the police in charge while the army acts as reinforcement.

While deployment details are still being decided, strategic plans include similar arrangements to those seen during joint operations in gang hotspots in the Western Cape and xenophobic protests in Gauteng. This is a step short of a state of emergency in which the president is able to create regulations to govern single-handedly.

Ramaphosa said he would meet the National Security Council (consisting of law enforcement and intelligence agencies) twice a day to co-ordinate all measures necessary to restore stability in hotspot areas.

Zuma is fighting his incarceration in the Constitutional Court. In a virtual hearing on Monday, the former president’s lawyers asked the court to set aside the sentence pending the final decision in the case of the application he brought in a bid to reverse the court’s finding against him.

Zuma’s term as head of state ended in disgrace when he was recalled by the governing ANC in 2018 after nine years in high office, following the party’s electoral declines due to corruption.

Under Zuma, law enforcement agencies bent over backwards to suit his interests, even going as far as scrapping the crime-busting force, the Scorpions, withdrawing corruption cases and changing the mandate of the State Security Agency from having to serve the national interest to serving the president’s, witnesses at the state capture commission of inquiry have said.

President Cyril Ramaphosa addressed the nation on July 12 2021 after violent looting and riots across the country.