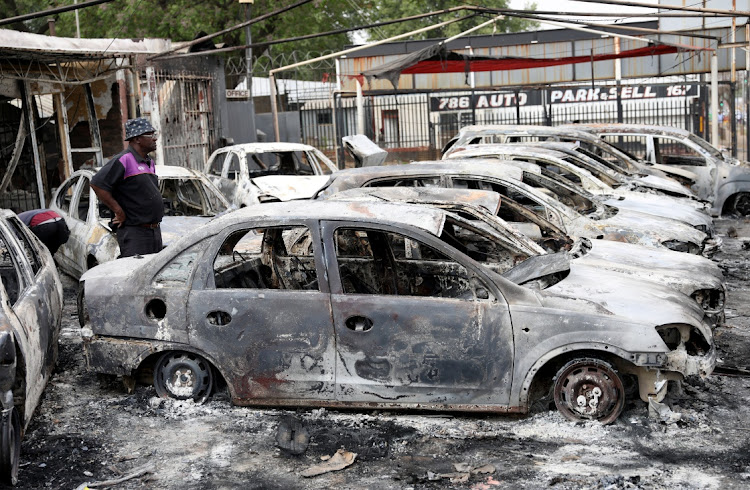 A man looks at cars that were burnt during the latest spate of xenophobic attacks, at a car dealership in Johannesburg, South Africa, September 5, 2019. Picture: REUTERS / SIPHIWE SIBEKO

Consumer sentiment fell to its lowest level since 2017 in the third quarter of 2019, weighed by rising job losses, declining incomes and Eskom woes, all of which have contributed to intensifying economic gloom.

Other factors included recent xenophobic violence and “post election blues”, as expectations built up ahead of the general polls have failed to materialise.

Even with Wednesday’s fuel price cut, economists warn that this will barely register in consumers’ pockets and that SA could be set for another contraction  in economic growth.

Consumer spending accounts for about two-thirds of GDP.

According to the FNB/BER consumer confidence index (CCI) released on Tuesday, sentiment levels plummeted into negative territory, falling from +5 index points during the second quarter of 2019 to -7 during the third quarter.

FNB said the latest reading is the lowest since the fourth quarter of 2017, when it hit -8, and is well below the long-run average for the index, which has measured +2 since 1994.

The decline was also well below the +3 expectations of some economists polled by Bloomberg.

Weak consumer sentiment, which now lines up more closely with business confidence levels that are at historical lows, comes as President Cyril Ramaphosa hosts the SA Investment Conference. The summit is aimed at drumming up investment in SA’s beleaguered economy.

The CCI is a measure of households’ confidence in the economy and sentiment regarding their financial position.

FNB economist Siphamandla Mkhwanazi said “a confluence of adverse economic developments in all likelihood contributed to the slump”.

These include rising unemployment, declining real per capita incomes, a further R59bn bailout to Eskom and an upsurge in xenophobic violence in recent months.

The SA Reserve Bank’s decision to leave interest rates unchanged in September may also have disappointed indebted consumers hoping for an interest-rate cut, he said.

Consumers could also be experiencing “post-election blues”, he said. In the past, consumer confidence has increased during each quarter in which SA has held elections, and then declined somewhat in the quarter thereafter.

Confidence across all household income groups declined, but was especially acute among higher-income earners — or those earning R14,000 or more a month.

High-income consumers may have had unrealistic expectations about what Ramaphosa could achieve in a short period of time, said Mkhwanazi, and these had “now been dashed”.

The outcome was unsurprising given record levels of unemployment, retrenchments and debate over reducing the wage bill in the public service, said Isaah Mhlanga, chief economist at Alexander Forbes Investments.

Added to this, there has been little support from a monetary policy point of view through reduced interest rates, he noted.

Consumer spending making up a large portion of GDP is “a very concerning issue”, Mhlanga said, because “consumers don’t spend as much if they are not confident”.

A drop in the fuel price that kicked in on Wednesday is unlikely to offer consumers much of a reprieve, said Mhlanga.

Petrol prices will drop by 13c a litre, while diesel will fall by between 14c and 16c a litre, driven mainly by declining global oil prices.

“Any person that is filling up a fuel tank, they are not going to be sensitive to a 13c decline,” he said. “It disappears in the numbers.”

The slide in consumer confidence, alongside other data, was another indication that SA could be headed for another quarter of shrinking GDP growth, said economist Mike Schussler.

During the first three months of 2019, economic growth shrank 3.1%. Though it recovered in the second quarter, recent data suggest that growth may be closer to zero, if not heading into a decline, in the third quarter.

For consumer confidence to turn around, it is crucial that employment prospects and income growth prospects improve, said Mhlanga.

The National Credit Amendment Act will come as a relief to the many South Africans stuck in debt traps, but banks warn that there’s a downside
National
2 years ago

For retailers Friday 29th is a black- letter day

Retailers Massmart, Truworths and Woolworths stagger on as consumers struggle

Retailers Massmart, Truworths and Woolworths stagger on as consumers struggle