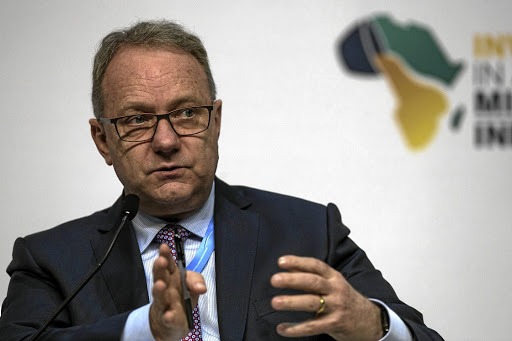 Anglo, which estimates it is the fifth biggest exporter of thermal coal, has clearly stated that thermal coal is no longer an asset it wants as it moves to adjust its portfolio to become more investor and environmentally friendly.

Anglo ships about 18-million tonnes of coal a year out of SA to Asia and Europe, and sells 10-million tonnes to domestic clients. It generated about $1.9bn (R34.6bn) in revenue in 2019 and employed 5,000 people.

“In combination with our ongoing portfolio evolution — with Quellaveco in copper, and Woodsmith in crop nutrients, and our expected exit from our thermal coal operations in SA in the next two to three years — we are well positioned for future demand themes and the needs of modern consumers and society,” Cutifani said.

Speaking at a Bank of America Merrill Lynch global metals, mining and steel conference on Tuesday, he noted that thermal coal assets in SA and Colombia delivered just 1% of the group’s earnings before interest, tax, depreciation and amortisation (ebitda).

Cutifani said in February that Anglo was taking a careful approach to its exit from the business, aware of its responsibilities to employees, communities and the government, not to mention clients. This meant there would be no rushed decisions

Anglo’s total thermal coal output has fallen by more than half since 2012 to 38-million tonnes, with a big sale of its coal mines supplying SA power utility Eskom to Seriti Resources and the sale of thermal coal mines in Australia.

Anglo told the market during its AGM in London that it was considering listing its thermal coal business in SA on the JSE as one of the options to get out of the asset.

“Our thermal coal operations in SA constitute a strong and attractive business with high-quality, well-located assets and with access to established export infrastructure,” the company said in a statement responding to shareholder questions at the AGM. “The operations provide a wide range of economic and social benefits for host communities and for the country, including significant employment, tax revenues, export earnings, and the provision of many essential community services.”

Anglo has three wholly owned mines in SA, the Goedehoop, Greenside and Khwezela collieries; the Zibulo colliery, in which it holds a 73% stake; and a 50/50 joint venture at Mafube colliery. With these assets, Anglo has a valuable 23.2% stake in Richards Bay Coal Terminal, one of the world’s top two coal exporting facilities.

But the move towards environmentally friendly assets as investors balk at putting their money into companies mining fossil fuels and contributing to greenhouse gas emissions, the need to change was apparent.

“We are therefore working towards a possible demerger of our thermal coal operations in SA as our likely preferred exit option, expected in the next two to three years, with a primary listing on the JSE for the demerged business,” Anglo said.

“We will continue to consider other exit options as we engage with stakeholders as part of our commitment to a responsible transition.”

It’s likely that Anglo is considering a listing of the assets rather than a sale because of the difficulties in a buyer securing funding from banks that are similarly under pressure from investors about moving away from fossil fuel exploitation.

Cutifani noted that thermal coal makes up more than a third of the global energy mix and will remain an important source of electricity generation until 2030.

There was no mention of the Cerrejón thermal coal business it shares with BHP and Glencore in Colombia. Anglo’s one third stake in the business accounted for exports of nearly 9-million tonnes and revenue of $494m in 2019.

The country knows what to do, and should not shy away from approaching the IMF
Opinion
2 years ago

Instead of using any number of available payment technologies, the most vulnerable, cheek by jowl, are our coronavirus killing fields, writes GG ...
Opinion
2 years ago

Anglo has anticipated a $1.5bn boost to earnings because of the weakness of currencies in its operating bases and the plunge in the oil price
Companies
2 years ago