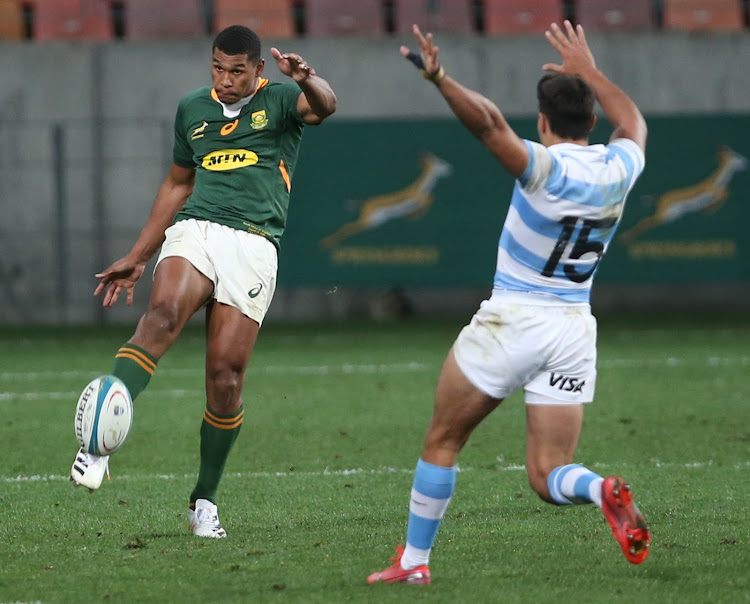 Damian Willemse is embracing his role as utility back as the Boks prepare for Rugby Championship Tests in Australia. Picture: GALLO IMAGES/ RICHARD HUGGARD

With the Boks gearing up for a crunch Rugby Championship clash against the Wallabies at Gold Coast on Sunday, the experienced Steyn is bringing calm to the squad.

Willemse says he is embracing his role as utility back as the Boks prepare for a testing four weeks featuring back-to-back Tests against Australia and New Zealand. The 23-year-old, who earned his 12th Test cap in the Springboks’ second match against Argentina in Gqeberha two weeks ago, covers fullback, flyhalf and inside centre.

Despite competing for a position with Steyn, Willemse said the veteran Springbok back’s willingness to share knowledge is invaluable.

“I’ve been training with Frans all week,” he said. “He is such a chilled guy, but he is also working very hard on his game

“Frans also brings a sense of calm and he always comes up with a plan. He’s been helping a lot of the youngsters such as me, Aphelele Fassi and Grant Williams, not only with our game management but also teaching us a few tricks.”

Willemse is excited that the Boks are returning to action against Australia and says they have to be on point to come away with a win.

“Aphelele and I were talking earlier about how small the margins are in Test rugby,” he said. “One mistake can cost you five or seven points with the opposition’s skillful play, so we need to play smart rugby and ensure that we do not make errors at the back.

“Everyone is excited to experience normal life again here in Australia. We’ve been in a bubble for a while now, but we are enjoying one another’s company.

“We are training hard, but we have also been playing cricket and having some fun. As much as we are looking forward to being out of quarantine, the main thing for us in the next four weeks is rugby.

“We have to ensure that we continue to deliver the results on the field. I’m really fortunate to be in the squad and I’ve been enjoying the challenge. Playing in the Tests against the British & Irish Lions and then Argentina helped me develop my skill set and game management.

“As with any challenge it will take hard work, but the coaches back me and I want to make the most of the opportunity if I am in the match-day 23 against Australia and New Zealand.

“I don’t have a favourite position, my goal is to be selected for the match-day squad. We have a lot of quality players in the squad with between 40 and over 70 Test caps, such as Frans Steyn, Willie le Roux, Jesse Kriel and Morné Steyn, who I am competing with.”