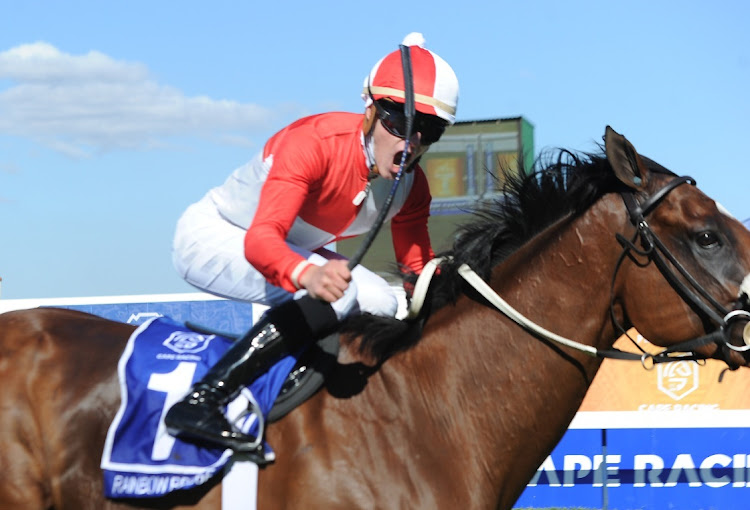 Luke Ferraris — champion apprentice for the past two seasons — announced his arrival on the big stage when partnering Rainbow Bridge to victory in Saturday’s R1m Cape Met at Kenilworth.

In a bold tactical move taking the six-year-old to the outside rail Ferraris beat home the 19-10 favourite Belgarion with 100-1 shot Sovereign Spirit in third. Dual Durban July winner, Do It Again, finished fourth.

“This is the highlight of my career so far,” enthused Ferraris, who had finished runner-up on the Ideal World gelding in both the Green Point Stakes and Queen’s Plate.

Though the Cape’s premier race was run behind closed doors, the youngster will know that his parents, David and Pam Ferraris, will have been cheering madly in Hong Kong. It will have been 11pm in the former British colony by the time of the race, but they follow their son’s every move and will have been glued to their TV sets.

David Ferraris, 57, relocated to Hong Kong in 2004 and has handled a number of top horses notably Vengeance Of Rain who won six grade 1 races including the Dubai Sheema Classic.

The big question is how long his son — now in his first year as a fully-fledged jockey — remains in SA before joining his father in Hong Kong?

Expertly handled by trainer Eric Sands Rainbow Bridge won the Met for the late Chris Gerber in 2019 and Saturday’s success meant his charge joined two former champions, Politician and Pocket Power, as a dual winner of the grade 1 race.

MalaMala Game Reserve owner Mike Rattray purchased Rainbow Bridge for an undisclosed sum after Gerber’s death and his colours were also carried to victory in the 2004 Met by Yard-Arm.

One race that has eluded Rattray is the Durban July — Rainbow Bridge finished sixth in 2020 — so SA’s most famous racing event seems certain to be the main target for the gelding.

Rainbow Bridge can get worked up in the preliminaries before a race and Sands believes the absence of spectators may have helped his charge on Saturday. Bookies will be pleased it did as they faced a hefty payout if Belgarion had won.

Most pundits felt five-year-old Sovereign Spirit was simply making up the numbers after beating just one horse home in the Queen’s Plate. However, the son of Dynasty ran the race of his life to secure the third cheque of R100,000 for Lammerskraal Stud.

The disappointment of the race was Mike de Kock’s runner Queen Supreme who faded out of contention to finish second last, about 11 lengths behind the winner. This is likely to be the Irish-bred mare’s last appearance as the plan is for her to continue her career overseas.

Justin Snaith missed out in the Met, but he still saddled four winners at the meeting including Majorca Stakes victor Captain’s Ransom. Sporting the colours of Suzette Viljoen, the Captain Al filly — bred at Moutonshoek Stud — has now won five of her six starts and must be one of the most valuable racehorses in the country.

Three-year-old Kommetdieding will head for the Cape Derby after maintaining his unbeaten record with a decisive victory in the grade 3 Politician Stakes. It was a red-letter day for jockey Sihle Cele who has partnered the son of Elusive Fort to each of his four successes.

Owned by Ashwin Reynolds, Kommetdieding, which roughly means “come with this thing”, is trained by Harold Crawford and his daughter Michelle Rix. The three-year-old is proof there are bargains to be found as he cost just R55,000 at a Durban sale.

Irish bred Queen Supreme might be a gamble, but one that pays off
Sport
2 months ago

Man the Kenilworth scoreboard for Snaith and Fourie

Let’s face it, the 2021 Met will be forgotten quite easily

With empty stands and race followers watching from armchairs, the Cape’s premier horse race will be low on excitement and forgettable
Sport
2 months ago
Next Article

Plum rides for Chamu Mabaya at the Vaal

Plum rides for Chamu Mabaya at the Vaal