The JSE saw a meaningful decline in offshore ownership over the three years to June 2021, with the top 80 SA-domiciled issuers losing about R220bn ownership by market cap to end the period at 36%.

Over the same time, according to Refinitiv, these companies saw a 26% reduction in research coverage by analysts, though the weighted average recommendation was upgraded by about 11%, to just below a buy.

Despite analyst upgrades and strong growth for most global indices, the top 80 stocks added only 3.2% to their market caps over the period. Excluding the strong recovery in basic resources, they shed about R850bn from their market caps (-15%).

From end-June 2018 to end-June 2021 the FTSE/JSE all share index (Alsi) fell 3.2% and the FTSE/JSE shareholder weighted index (Swix) grew 5.9%. The top 80 companies on the JSE that are domiciled in SA (excluding listings such as BHP and Richemont) represented about 78% of the total market capitalisation at end-June 2021 (R6.3-trillion). This subset gained 3.2% in market cap over the three-year period, but excluding the strong performance from the basic resources sector it lost a large 14.8% (R800bn in market capitalisation). 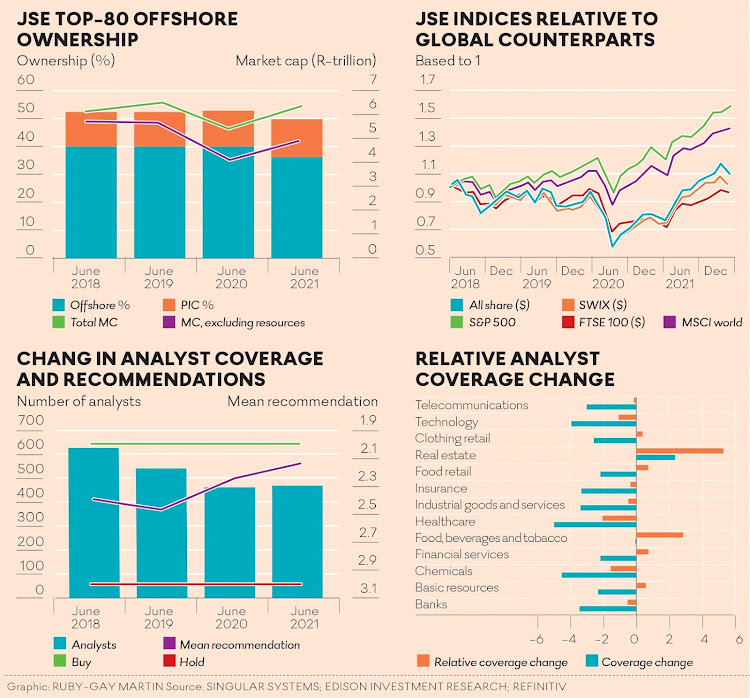 A key driver of the JSE’s underperformance over recent years was a slew of credit downgrades from ratings agencies, starting in 2017, during the final years of Jacob Zuma’s presidency. The period from end-June 2018 to end-June 2021 saw SA move from an investment-grade rating by two of the three key ratings agencies to junk status in 2020, and between two and three notches below investment grade in 2021.

The downgrades drove a flat market until early 2020 with the exception of the resources sector, which benefited from a shift in the commodities cycle. During 2020 the market was severely affected by Covid-19, with the financial sectors (banks and insurers in particular) losing almost half of their peak value.

The industrial and consumer sectors more than recovered from the Covid dip, driven by increased economic activity, with the resources, chemical and energy sectors benefiting from strong commodity prices. However, the financial sector remains about 25% below peak levels.

Like the London Stock Exchange (FTSE 100), the JSE suffered from country-specific issues (Brexit and ratings downgrades, respectively), and Brexit), but both bourses also lack exposure to the new economy stocks that have been driving global returns and have not benefited from the meaningful liquidity on offer. In both cases the bourses and issuers face challenges to convince capital markets that their value stocks deserve attention.

The underperformance of the JSE over the three years (and thereafter) coincided with a marked decline in the offshore ownership of the top 80 JSE companies, from 39.5% to 36%. This represents about R220bn lower offshore ownership, with most of the decline occurring from June 2020 to June 2021.

Over the same period Public Investment Corporation (PIC) ownership of the top 80 companies increased from 12.5% to 13.9%, with other SA investors increasing their ownership by 2.2 percentage points to 52%. In total, 14 of the 17 sectors on the JSE recorded a decline in offshore shareholding since end-June 2018.

The three exceptions were banks (a 2.7% increase with strong Capitec and Nedbank movements offset by a large decline for Absa Group), basic resources (a 2.3% increase driven by platinum producers with gold miners generally seeing declines) and food, beverages and tobacco (a 0.9% increase with Distell and Tiger Brands gaining most, with Astral Foods and AVI losing).

The largest offshore shareholding declines were seen for the energy sector (Exxaro and Montauk), clothing retail (across the board), food retail (Clicks held up well) and telecommunications (MTN most affected).

Though many factors reduced the JSE’s attractiveness to offshore investors, we have seen analyst recommendations steadily being upgraded, highlighting the underlying value in the bourse. Using a one to five scale, where one represents a strong buy and five a strong sell, according to Refinitiv the weighted average recommendation for the top 80 SA-domiciled issuers  improved by 11% over the three years, from 2.4 (midway between a hold and a buy) to 2.1 (just below a buy).

The decline in coverage was almost universal, with only the listed real estate sector increasing its number of analysts over the three-year period. On a relative basis, the main winners were real estate, food & beverages and tobacco, with the main losers being healthcare and chemicals companies.

Global bourses experienced an initial decline in research coverage with the introduction of MiFID II in 2018. However, this trend was partially reversed as alternative research models, including sponsored research, started to proliferate. JSE issuers have been slow to adopt the sponsored research model, but this service is increasingly on offer, which may help reverse the coverage decline.

The JSE is highly dependent on offshore shareholding to support the ratings of its issuers. SA exchange controls and strong domestic investment by the PIC and BEE shareholders create a natural floor in the demand for JSE-listed companies that are domiciled in SA. This amplifies the importance of offshore investors and inbound portfolio flows in driving incremental demand for JSE stocks, hence the rating of the constituents of the bourse.

Offshore investors, especially emerging-market fund managers, are spoilt for choice when allocating their capital and rely heavily on analyst research among other screening tools in distilling their large investment universe to a manageable portfolio of stocks. The meaningful reduction in JSE research coverage poses a serious challenge for the bourse and its issuers, though alternative research solutions may help to reverse the trend.

• Strydom is CEO of equity research company Austin Lawrence Gidon. This article was been created in collaboration with Singular Systems.

JSE food groups such as Libstar, AVI, RCL and Brait’s soon-to-be listed Premier could be where the deals are at this year
Money & Investing
4 months ago

Whether one laughs or cries over BLSA’s welcoming of Bain as member, it should chill the bones
Opinion
4 months ago

If there’s been one big shift in global investment markets over the past two years, it’s the legion of small punters who are sticking it to the man, ...
Opinion
4 months ago
Next Article