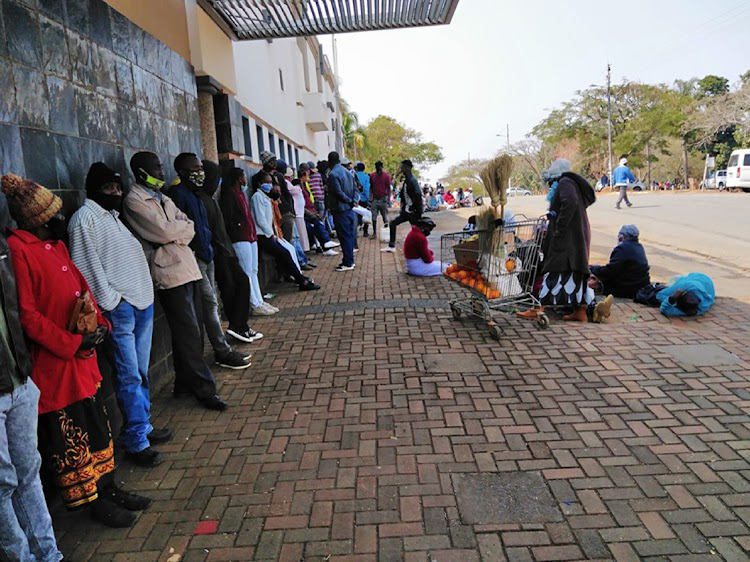 People queue for their Covid-19 social relief of distress grants at Makhado post office in Limpopo in this file photo. Picture: SUPPLIED

In many ways economics is about the future. People save money to protect themselves from calamity. Banks charge interest to account for future risks. People trade stocks to bet on the earnings trajectory of a company. Workers save for retirement.

Preparing for the future is something humans have always done. In ancient Greece people used to save olive oil as it could be stored for relatively long periods. Stockpiled olive oil was insurance if things went south.

In more recent times, the big social security initiatives in some countries were borne of crises or political expediency. In the 1870s, German chancellor Otto von Bismarck was the first to introduce a national system to protect workers in sickness, injury and old age. What drove Bismarck was not altruistic beliefs but rather fear of getting outflanked by rising socialist parties.

At the height of World War 2 in 1942, the British government published the Beveridge Report, which laid out the basis for a unified social security system. In post-war France, a national social security system was set up in 1946. Two years later, the UN General Assembly adopted the Universal Declaration of Human Rights, whose article 22 recognised that “everyone, as a member of society, has the right to social security”.

Social protection systems are now a policy preoccupation, with much discussion on a basic income grant. Those arguing in support of the grant say it would give the poorest some stability and security. The main argument against is usually the obvious — cost and inflationary risks. Others argue it will dilute incentives to work.

However, the main point is not affordability, it is design. Take two illustrative (and contrasting) examples. Bolsa Família, an income grant, was introduced by the Brazilian government in the early 2000s. It has additional social goals beyond alleviating poverty, such as requiring school attendance and health checks. To receive cash transfers, recipients have to prove compliance. Targeting multiple social goals simultaneously has been very successful in reducing poverty and inequality. Mexico’s Prospera is a similar scheme and has also been successful.

At the other end of the scale is Denmark’s Flexicurity model, known as such as it offers security for workers and flexibility for employers alike. Workers benefit with universal health insurance and paid sick leave. A range of active labour market policies with a focus on skills and training try to bounce displaced workers back into the labour market. Employers like the flexibility labour laws provide.

Flexicurity is a comprehensive, co-ordinated approach to both social security and labour market policies. It works well for Denmark, and though it would not be affordable here there are lessons in the approach. Complementary targeted policies operating in tandem can achieve multiple social and economic objectives. In designing any new initiative here that should be the lodestar.

Even the New Deal instituted in the US in the 1930s was a policy package consisting of the “three Rs”: relief (for the unemployed); recovery (of the economy through federal spending and job creation); and reform (of capitalism by means of regulatory legislation and the creation of new social welfare programmes).

Social security provides confidence. Confidence is critical for decision-making in all spheres of life, from a decision to invest in an education, to a firm’s willingness to hire more workers. If a basic income grant could help poor households stave off the worst effects of poverty, that would be great. But if it could help provide a modicum of economic confidence to invest in other choices, such as education, health, skills development or entrepreneurial pathways, that could be a game changer.

These are worrying times for democracy globally, with economic crises proving fertile ground for populists and radicalism
Opinion
2 months ago

Like eggs and omelettes, the two are intrinsically linked
Opinion
2 months ago