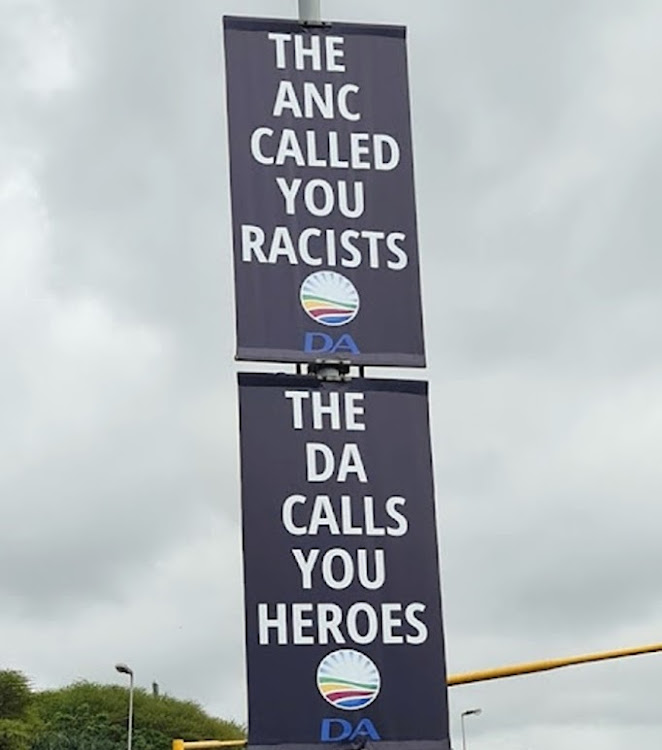 The DA posters in Phoenix that have caused friction in the party. Picture: SUPPLIED

The DA’s senior leaders in KwaZulu-Natal are pushing for their  national leaders to concede that the controversial election posters in Phoenix, north of Durban, send the wrong message to voters about race and should be taken down, according to sources.

The DA’s top leaders met in KwaZulu-Natal on Wednesday, where the posters saying “The ANC called you racist. The DA calls you heroes” were discussed. They ignited a political furore when they were put up.

The posters are a reference to murders in Phoenix during the July unrest where 36 people were killed.

DA provincial leader Francois Rogers did not sign off on the posters, and apparently only found out about them with the rest of SA.

“The provincial management committee, which would ordinarily sign off on campaign messaging, did not know. In fact, out of the six of us, only Dean [Macpherson]  knew, hence we had an emergency meeting this morning [Wednesday] to ask him to explain.

When contacted for comment, Rogers referred all questions to Macpherson, who is the provincial chair of the DA in KwaZulu-Natal. Macpherson indicated via text message that he was in a meeting and could not take calls.

He had not responded to texts at the time of publication.

Another provincial executive committee member, who spoke on condition of anonymity, said DA activists were seething with anger over the posters.

“Since no-one in the top leadership knew, we also did not know. This whole thing is discouraging because it is erasing our hard work on the ground.

“I have been on the campaign trail today and that is all people want to talk about, not the message that we are bringing, but these bloody posters. We await to see what the party will do because they cannot ignore this,” a provincial executive committee member said.

Sources in the committee said it appeared that Macpherson took the decision alone.

It could not be established whether Macpherson had the blessing of national leaders to go ahead with the posters. However, some party members, such as Johannesburg mayoral candidate Mpho Phalatse, acknowledged that the party may not have intended to cause harm but “should apologise, take the posters down and move on”.

Another DA activist said they wished the DA had included activists in the decision-making. “Had we at least debated this and lost, we would be able to explain to voters and SA. But now we are as confused as everyone and probably angrier than everyone else because we will feel the consequences.”