From grains and oilseeds to energy and metals supplies, here are countries' major commodity exports 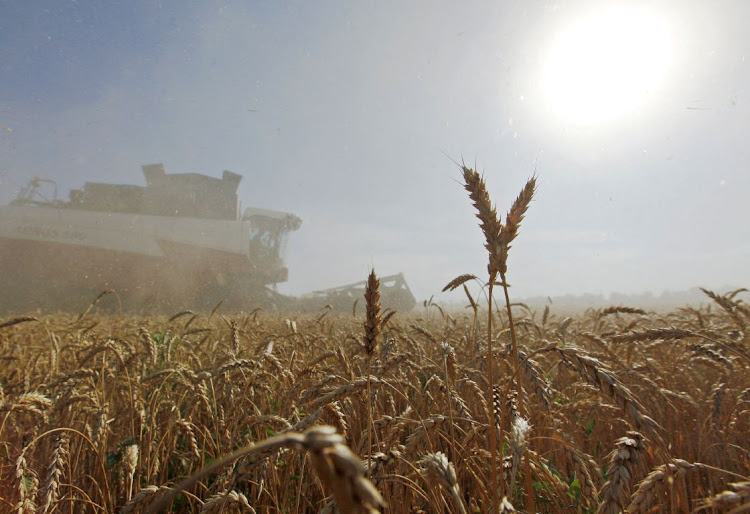 A combine harvests wheat in a field in the Stavropol region, Russia. Picture: EDUARDO KORNIYENKO/REUTERS

Russia’s invasion of Ukraine by land, air and sea threatens to disrupt exports of commodities such as grains and oilseeds from both countries, while the prospect of toughened sanctions against Russia could disrupt energy and metals supplies.

Russia and Ukraine are major wheat suppliers, accounting for a combined 29% of global exports, the bulk of which go through ports in the Black Sea.

Much of that wheat is exported to major buyers in the Middle East and North Africa such as Egypt and Turkey.

Ukraine is also one of the world’s top four maize exporters and had been shipping about 4.5-million tonnes a month with major customers including China and the EU.

The two countries also account for about 80% of global exports of sunflower oil.

Europe relies on Russia for about 40% of its natural gas. Most comes through pipelines including Yamal-Europe, which crosses Belarus and Poland to Germany, and Nord Stream 1, which goes directly to Germany. By 2021 Ukraine was a transit corridor largely for gas going into Slovakia, from where it continued to Austria and Italy.

Russia has said it will continue to deliver uninterrupted natural gas supplies to world markets.

Although EU or US sanctions on Russian gas imports are seen as unlikely, damage to pipelines or Russia stopping gas transit through Ukraine could happen, analysts said, and fully replacing Russian gas to the EU would not be achievable in the short term.

Most Russian metal producers have so far escaped sanctions imposed by the West since Moscow annexed Crimea in 2014.

An exception is the world’s largest aluminium producer outside China, Rusal, which is subject to measures imposed by the US between April 2018 and early 2019.

Rusal produced 3.8-million tonnes of aluminium in 2021, about 6% of the estimated world production.

Europe, Asia and North America are Rusal’s main markets. Miner and commodity trader Glencore has a long-term deal running until 2025 to buy primary aluminium from Rusal.

Data from the US Geological Survey (USGS) shows Russia produced 7,600 tonnes of cobalt in 2021, more than 4% of the global total.

Russia was the second-largest producer, far behind the Democratic Republic of Congo, which produced 120,000 tonnes.

Nornickel is the largest producer in Russia, selling 5,000 tonnes in 2021. Nornickel sells most of its output to Europe.

Russia produced 920,000 tonnes of refined copper last year, about 3.5% of the world total, according to USGS, of which Nornickel produced 406,841 tonnes.

Asia and Europe are the main export markets.

Nornickel is the world’s top producer of refined nickel. It produced 193,006 tonnes in 2021 or about 7% of global mine production estimated at 2.7-million tonnes. It sells to global industrial consumers under long-term contracts.

Russia is the world’s third-largest producer of gold after Australia and China and accounts for about 10% of global mine production, which according to the World Gold Council totalled 3,500 tonnes last year.

Russian gold is produced by companies that include Polyus and Polymetal. Russian miners mainly sell their gold to the country’s commercial banks which then export it.

Data from USGS shows Russia produced 27,000 tonnes of titanium sponge and Ukraine 5,400 tonnes last year. Combined they account for about 15% of the global total.

Russia produced 76-million tonnes of steel or nearly 4% of the global total, according to the World Steel Association.

Severstal, NLMK, Evraz, MMK and Mechel are Russia's main producers. They export about half of their production, mainly to Europe.

State-controlled Alrosa, the world's largest producer of rough diamonds by volume, produced 32.4-million carats in 2021, about 30% of the global total. It exports mostly to Belgium, India, and the United Arab Emirates.

Russia is a major producer of potash, phosphate and nitrogen containing fertilisers — crop and soil nutrients. It produces more than 50-million tonnes a year of the fertilisers, 13% of the global total.

Phosagro, Uralchem, Uralkali, Acron and EuroChem are the biggest players.

They export to Asia and Brazil.

Russian forces roll into Ukraine, marking the biggest attack by one state against another in Europe in almost 100 years
World
5 months ago

As Russian forces close in on Ukraine world powers are taking co-ordinated measures to confront Putin, but so far it has not been enough
World
5 months ago
Next Article