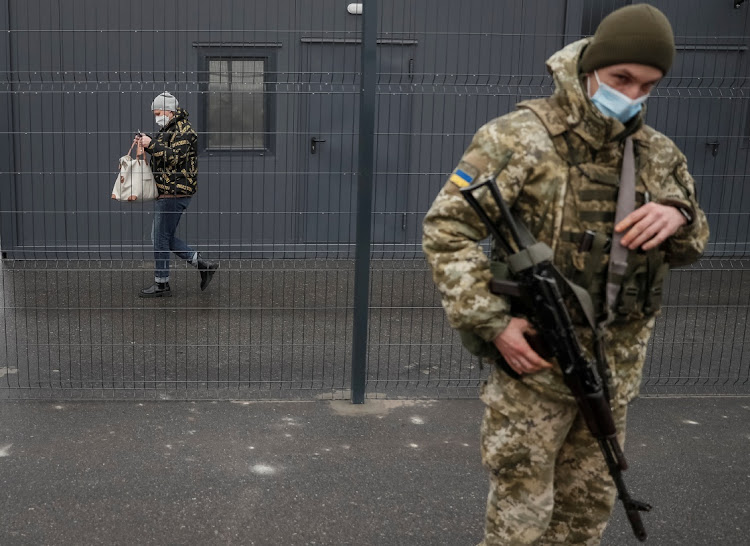 A woman crosses the contact line between pro-Moscow rebels and Ukrainian troops in the settlement of Stanytsia Luhanska, Ukraine, on February 23 2022. Picture: REUTERS/GLEB GARANICH

Kyiv/Donestsk  — Ukraine declared a state of emergency on Wednesday and told its citizens in Russia to flee, while Moscow began evacuating its Kyiv embassy in the latest ominous signs for Ukrainians who fear an all-out Russian military onslaught.

Shelling intensified at the line of contact in eastern Ukraine, where Russian President Vladimir Putin recognised the independence of two Moscow-backed rebel regions this week and has ordered the deployment of Russian troops as “peacekeepers”.

But there was still no clear indication of whether he plans to follow that up with a massed assault on his neighbour by tens of thousands of troops gathered near Ukraine’s borders.

The uncertainty has roiled financial markets but oil prices eased on Wednesday, global stocks broke a four-day slide and demand for safe-haven assets waned as Western leaders and Ukraine awaited Putin’s next move.

“Predicting what might be the next step of Russia, the separatists or the personal decisions of the Russian president — I cannot say,” Ukrainian President Volodymyr Zelenskiy said.

In addition to the 30-day state of emergency, the Ukrainian’s government has announced compulsory military service for all men of fighting age. Ukraine’s parliament, cabinet and foreign ministry websites were down. Government websites have experienced several outages in recent weeks, which Kyiv has blamed on cyberattacks.

Moscow denies planning an invasion and has described warnings as anti-Russian hysteria. But it has also taken no steps to withdraw the troops deployed along Ukraine's frontiers.

On Wednesday, it took down flags from its embassy in Kyiv, having ordered its diplomats to evacuate for safety reasons.

The US and its allies unveiled incremental sanctions against Russia, while making clear they were keeping tougher measures in reserve in case of a full-scale invasion.

EU sanctions approved on Wednesday will add all members of Russia's lower house of parliament who voted to recognise the separatist regions in Ukraine to a blacklist, freezing their assets and banning travel.

EU leaders will also hold an emergency summit on Thursday to discuss what to do next.

Britain announced new restrictions banning Russia from the issuing of new bonds in its security markets, and called for its broadcasting regulator to investigate Russia's RT international television news channel as a propaganda outlet.

“There will be even more tough sanctions on key oligarchs, on key organisations in Russia, limiting Russia’s access to the financial markets, if there is a full scale invasion of Ukraine,” British foreign secretary Liz Truss said.

The steps follow measures announced on Tuesday, including freezing the approval of a new Russian gas pipeline by Germany, and imposing new US sanctions on Russian banks.

But none of the measures announced so far directly targets Putin himself, or is expected to have serious medium-term consequences for Moscow, which is sitting on more than $630bn in international reserves. The rouble fell, but not by much.

Western countries have been warning for weeks about the possibility of the bloodiest war in Europe for decades. That has not materialised but the apparent threat remains, leaving policymakers to struggle with calibrating their response.

Washington has described Russia’s actions as the start of an “invasion”, but it and its allies have stopped short of the major financial sanctions they have threatened if there is a full-blown attack.

Ukraine’s military said one soldier had been killed and six wounded in increased shelling by pro-Russian separatists using heavy artillery, mortar bombs and Grad rocket systems in the two breakaway areas over the previous 24 hours.

New satellite imagery showed several fresh troop and equipment deployments in western Russia and more than 100 vehicles at a small airfield in southern Belarus, which borders Ukraine, according to US firm Maxar.

For months, Russia has presented the crisis mainly as a dispute with the West, demanding security guarantees, including a promise never to allow Ukraine to join Nato.

But this week’s recognition of the separatist regions was accompanied by much stronger language against Ukraine, including personally from Putin.

In a TV address on Monday, Putin spoke of the centuries of history to characterise the Ukrainian state as an artificial construct wrongly carved out of Russia by its enemies.

Some who saw the speech said they now feel menaced by a leader making decisions which no longer appear rational.

“In the case of Putin, this is not a struggle for money or power: it’s about pride. Which means the mind is switched off. He can’t stop, and he can’t be stopped,” said Lilia,  a pensioner in the Kyiv suburb of Brovary.

German foreign minister Annalena Baerbock said Russia was heading down a path that would make it a global pariah, urging it not to “completely isolate yourself worldwide”.

Putin said he was always open to finding diplomatic solutions but that “the interests of Russia and the security of our citizens are unconditional for us”.

The fortunes of the country’s billionaires tumbled $33bn in 2022, and escalating conflict in Ukraine is likely to lead to greater wealth destruction
News
5 months ago

The French president’s support is holding up ahead of the presidential election despite placing himself at the centre of faltering efforts to contain ...
News
5 months ago 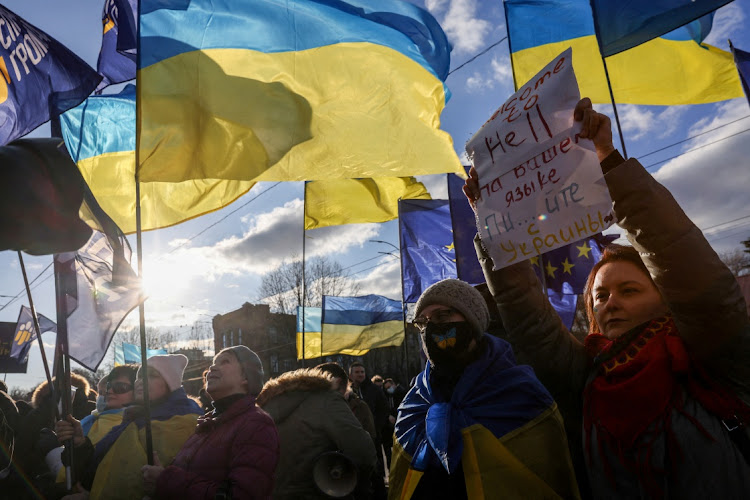