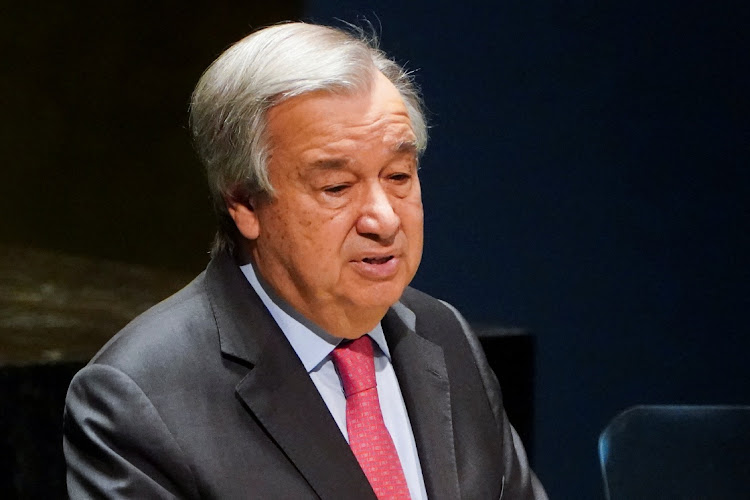 UN secretary-general Antonio Guterres speaks during a meeting on the situation between Russia and Ukraine, at the UN headquarters in New York, the US, February 23 2022. Picture: CARLO ALLEGRI/REUTERS/

New York  —  Ukraine appealed to the UN General Assembly on Wednesday to stop Russia’s “aggressive plans,” as UN secretary-general Antonio Guterres warned the 193-member body that an expanded conflict of a grave “moment of peril”.

The General Assembly met for its annual meeting on Ukraine, which coincides with escalating tensions over US accusations that Russia has deployed more than 150,000 troops near Ukraine’s borders and is ready to invade. Russia has denied it wants to invade Ukraine and accuses Washington and allies of hysteria.

Guterres said if the conflict escalated into all-out war “the world could see a scale and severity of need unseen for many years”.

Washington and allies imposed the sanctions after Russia recognised breakaway regions in eastern Ukraine as independent and ordered Russian troops there to “keep the peace”. Washington has dismissed that justification to deploy troops as “nonsense”, and Guterres said they would not be “peacekeepers”.

On Tuesday, he said Russia had violated the territorial integrity and sovereignty of Ukraine by recognising two separatist regions — the self-proclaimed Donetsk People's Republic and the Luhansk People's Republic — as independent. Putin on Tuesday ordered his defence ministry to deploy Russian forces to “perform peacekeeping functions” in eastern Ukraine.

Guterres on Wednesday called for a ceasefire and return to the dialogue.

Britain’s minister of state for South Asia and the Commonwealth, Tariq Ahmad, urged other countries to also sanction Russia: “The Kremlin must understand the strength of the world’s condemnation of President Putin's war of choice.”

The General Assembly meeting offers countries a chance to air their views, a move the US and others hope will show that Russia is internationally isolated over its moves on Ukraine. The body will not take any action on Wednesday.

In 2014, the General Assembly adopted a resolution — with 100 votes in favour — declaring invalid a referendum on the status of Crimea, which Russia annexed. General Assembly resolutions carry political weight but are not legally binding.

“We need to close ranks and strongly reject such action,” German minister of state Tobias Lindner told the General Assembly on Wednesday. “If not, then what has hit Ukraine today could happen to other UN member states tomorrow.”

• Late on Wednesday  President Joe Biden said the US would impose sanctions on the company in charge of building Russia’s Nord Stream 2 gas pipeline.

The sanctions, which target the Nord Stream 2  company and its corporate officers, add to pressure on the Baltic Sea project that was designed to double the gas flow capacity from Russia to Germany.

The White House said the sanctions will not affect Gerhard Schroeder, a former German chancellor and a close friend of Putin’s who has headed the shareholders committee of Nord Stream since 2005.

Nord Stream 2 has not begun operations pending certification by Germany and the EU.

Germany on Tuesday halted the pipeline, worth $11bn, citing Russia’s actions towards Ukraine. The US and the EU worry the pipeline will increase Europes dependence on Russian energy supplies and deny transit fees to Ukraine, host to another Russian gas pipeline.

The fortunes of the country’s billionaires tumbled $33bn in 2022, and escalating conflict in Ukraine is likely to lead to greater wealth destruction
News
5 months ago

The French president’s support is holding up ahead of the presidential election despite placing himself at the centre of faltering efforts to contain ...
News
5 months ago