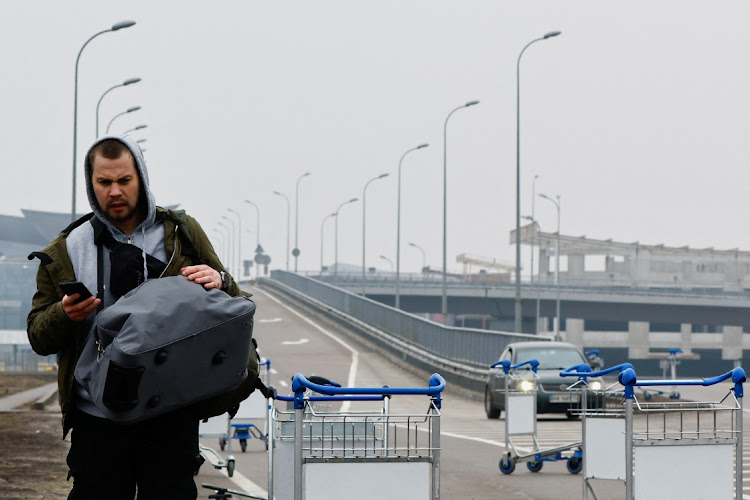 Kyiv — Russia has launched a full-scale invasion of Ukraine and is targeting cities with weapons strikes, foreign minister Dmytro Kuleba said in a tweet on Thursday.

Putin has just launched a full-scale invasion of Ukraine. Peaceful Ukrainian cities are under strikes. This is a war of aggression. Ukraine will defend itself and will win. The world can and must stop Putin. The time to act is now.

Interfax Ukraine reported rocket attacks on military facilities throughout Ukraine and that Russian troops had landed in the southern port cities of Odessa and Mariupol. It also reported staff and passengers evacuating Kyiv’s Boryspil airport.

“This is a war of aggression. Ukraine will defend itself and will win. The world can and must stop Putin. The time to act is now.”

Putin has called the invasion a “special military operation”.

“I have decided to conduct a special military operation … to protect people who have been subjected to bullying and genocide … for the last eight years.

“And for this we will strive for the demilitarisation and denazification of Ukraine. “And to bring to court those who committed numerous bloody crimes against civilians, including against citizens of the Russian Federation.”

UK Prime Minister Boris Johnson said he was appalled by the horrific events in Ukraine and has spoken to Ukrainian President Volodymyr Zelenskiy to discuss the next steps.

“President Putin has chosen a path of bloodshed and destruction by launching this unprovoked attack on Ukraine,” Johnson said.

I am appalled by the horrific events in Ukraine and I have spoken to President Zelenskyy to discuss next steps.

President Putin has chosen a path of bloodshed and destruction by launching this unprovoked attack on Ukraine.

The UK and our allies will respond decisively.

Germany’s defence minister said it was never too late for dialogue with Russia while underscoring that Nato and the EU stood united in the face of Moscow’s “drastic breach of international law”.

“This is especially true now, of course, for our allies on the eastern flank of the alliance, who can rely on our full support,” Christine Lambrecht said in a statement.

She appealed to Putin to withdraw his troops immediately and said Russia should prepare for harsh, unprecedented sanctions.

Ukraine said on Thursday it had closed its airspace to civilian flights because of a “high risk” to safety, and Europe’s aviation regulator also warned about the hazards of flying in bordering areas of Russia and Belarus because of military activities.

Ukraine State Air Traffic Services Enterprise said on its website that the country’s airspace was closed to civilian flights starting at 0.45am GMT on Thursday and that air traffic services had been suspended.

The EU Aviation Safety Agency (EASA) said airspace in Russia and Belarus within 100 nautical miles (185km) of their borders with Ukraine could also pose safety risks to airlines.

“In particular, there is a risk of both intentional targeting and misidentification of civil aircraft,” the agency said in a conflict zone bulletin.

“The presence and possible use of a wide range of ground and airborne warfare systems poses a high risk for civil flights operating at all altitudes and flight levels.”

The aviation industry has taken heightened notice of the risks conflicts pose to civil aviation since Malaysia Airlines flight MH17 was shot down over eastern Ukraine in 2014.

EASA said Russia’s defence ministry had sent an urgent message to Ukraine warning of a high risk to flight safety due to the use of weapons and military equipment from 0.45am GMT on Thursday and asked Ukraine’s air traffic control to stop flights.

An El Al flight from Tel Aviv to Toronto made a sudden U-turn out of Ukraine’s airspace around the time the airspace was closed, according to flight tracking website FlightRadar24.

A LOT Polish Airlines flight from Warsaw to Kyiv also turned back to Warsaw around the same time.

Hours before then, Safe Airspace, which was set up to provide safety and conflict zone information after the downing of MH17, said it had increased its risk level over all of Ukraine to “do not fly”.

It also warned of the potential for a cyberattack on Ukraine’s air traffic control.

Russia has also closed some airspace in the Rostov sector to the east of its border with Ukraine “in order to provide safety” for civil aviation flights, according to a government notice.

Before Ukraine advised of the airspace restrictions, the US, Italy, Canada, France and Britain had told their airlines to avoid certain airspace above eastern Ukraine and Crimea but stopped short of a total ban.

Two Ukrainian airlines last week disclosed problems in securing insurance for some of their flights while foreign carriers began avoiding the country’s airspace as Russia massed a huge military force on its border.

Updated: February 24 2022
This article has been updated with new information throughout