Biden calls the Russian action an ‘unprovoked and unjustified attack’ 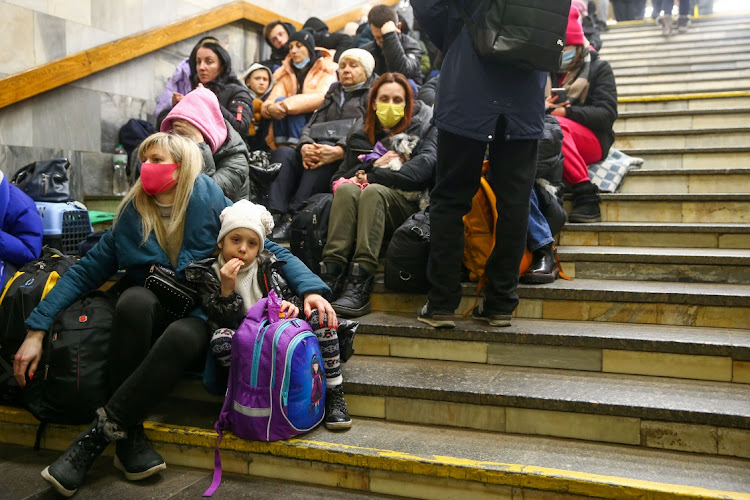 People take shelter in a subway station in Kyiv on Thursday after Moscow mounted an assault on Ukraine in the biggest attack on a European state since World War 2. Missiles rained down and Russia’s defence ministry said it had destroyed 83 land-based Ukrainian targets. Picture: VIACHESLAV RATYNSKYI/REUTERS

Kyiv/Mariupol — Ukrainian forces battled Russian invaders on three sides on Thursday after Moscow mounted an assault by land, sea and air in the biggest attack on a European state since World War 2.

After Russian President Vladimir Putin declared war in a predawn televised address, explosions and gunfire were heard throughout the morning in Kyiv, a city of 3-million people.

Missiles rained down on Ukrainian targets and authorities reported columns of troops pouring across Ukraine's borders from Russia and Belarus to the north and east, and landing on the southern coasts from the Black Sea and Azov Sea.

The assault brought a calamitous end to weeks of fruitless diplomatic efforts by Western leaders to avert war. US President Joe Biden met his Group of Seven counterparts virtually on Thursday to discuss harsh sanctions, and was due to speak later on Thursday.

President Volodymyr Zelenskiy called on Ukrainians to defend their country and said arms would be given to anyone prepared to fight.

“What we have heard today are not just missile blasts, fighting and the rumble of aircraft. This is the sound of a new Iron Curtain, which has come down and is closing Russia off from the civilised world,” Zelenskiy said. “Our national task is to make sure this curtain does not fall across our land.”

Fierce fighting was taking place in the regions of Sumy and Kharkiv in the northeast, Kherson and Odessa in the south, and at a military airport near the capital Kyiv, an adviser to the Ukrainian presidential office said.

Zelenskiy said troops were trying to fend off Russians attempting to capture the Chernobyl nuclear power plant, just 90km north of the capital. Regional officials said Ukrainian authorities had lost control of some territory in the Kherson region near Russian-occupied Crimea.

The highway heading west out of Kyiv was choked with traffic across five lanes as residents fled.

EU foreign affairs chief Josep Borrell said: “These are among the darkest hours of Europe since the Second World War.” 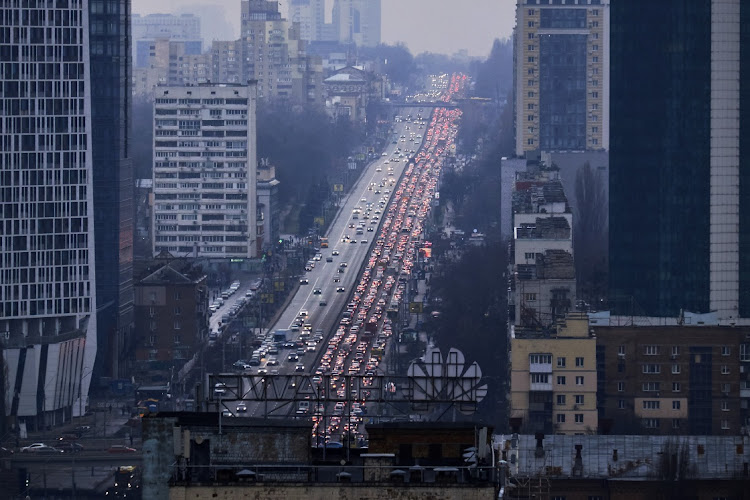 Residents of Kyiv leave the city after pre-offensive missile strikes of the Russian armed forces and Belarus from the territory of Belarus, February 24 2022. Picture: CHRIS MCGRATH/GETTY IMAGES

In his address, Putin said he had ordered “a special military operation” to protect people, including Russian citizens, subjected to “genocide” in Ukraine — an accusation the West calls baseless propaganda.

“And for this we will strive for the demilitarisation and denazification of Ukraine,” Putin said.

A resident of Kharkiv, Ukraine’s second biggest city and close to the Russian border, said windows in apartment blocks were shaking from constant blasts.

Blasts could be heard in the southeasterly port of Mariupol, near a frontline held by Russian-backed separatists in eastern Ukraine. Civilians in Mariupol packed bags; “We are going into hiding,” a woman said.

Ukrainian military authorities said 20 Russian helicopters and Mi-8 aircraft had landed paratroopers at Hostomel airport in the Kyiv region, where forces from both sides were fighting for control.

Unconfirmed reports of casualties included Ukrainian civilians killed by Russian bombardment and border guards defending the frontier, while Russia said three civilians had been wounded by Ukrainian shelling near the border.

Authorities in the southwesterly Odessa region said 18 people had been killed in a missile attack. At least six people were killed in Brovary, a town near Kyiv, authorities there said.

Ukraine's military said it had destroyed four Russian tanks near Kharkiv, killed 50 troops near a town in Luhansk region, and downed six Russian warplanes in the east.

Russia denied that any of its aircraft or armoured vehicles had been destroyed. Russian-backed separatists said they had downed two Ukrainian planes.

Even with a full-blown invasion under way, Putin's ultimate aim is obscure. He said he did not plan a military occupation, only to disarm Ukraine and purge it of nationalists.

The outright annexation of such a vast, hostile country could be beyond even Russia's military capabilities.

A senior US defence official said Washington believed the invasion was intended to “decapitate” Zelenskiy’s government. 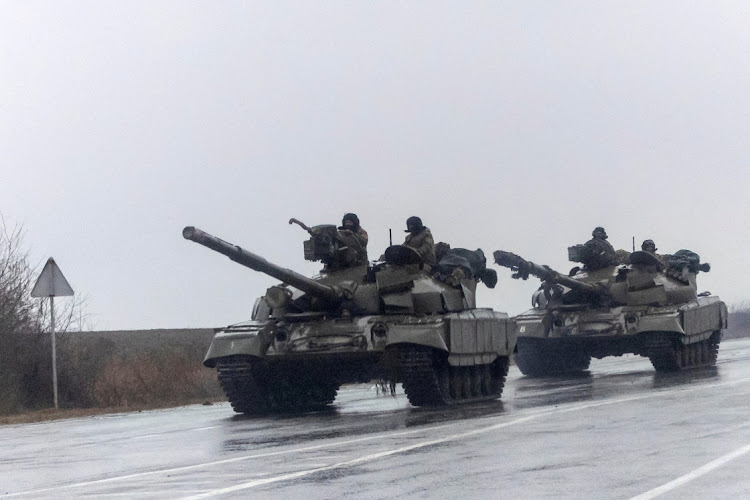 But it is hard to see Ukrainians accepting any new leadership installed by Moscow.

“I think we must fight all those who invade our country so strongly,” said one man stuck in traffic trying to leave Kyiv. “I would hang every single one of them from bridges.”

Biden has ruled out sending US troops to defend Ukraine, but Washington has reinforced its Nato allies in the region with extra troops and planes.

Russia is one of the world's biggest energy producers, and both it and Ukraine are among the top exporters of grain. War and sanctions will disrupt economies around the world already facing a supply crisis as they emerge from the coronavirus pandemic.

Stocks plunged and bond prices leapt; the dollar and gold soared. Brent oil surged past $100/barrel for the first time since 2014.

At least three major buyers of Russian oil said they had been denied letters of credit from Western banks, needed for shipments to go ahead.

A democratic nation of 44-million people, Ukraine is Europe’s biggest country by area after Russia itself. It voted for independence at the fall of the Soviet Union and aims to join Nato and the EU, aspirations that infuriate Moscow.

Putin, who denied for months that he was planning an invasion, has called Ukraine an artificial construct carved from Russia by its enemies — a characterisation Ukrainians see as an attempt to erase their more than 1,000-year-old history.

While many Ukrainians, particularly in the east, speak Russian as a native language, virtually all identify themselves as Ukrainian. 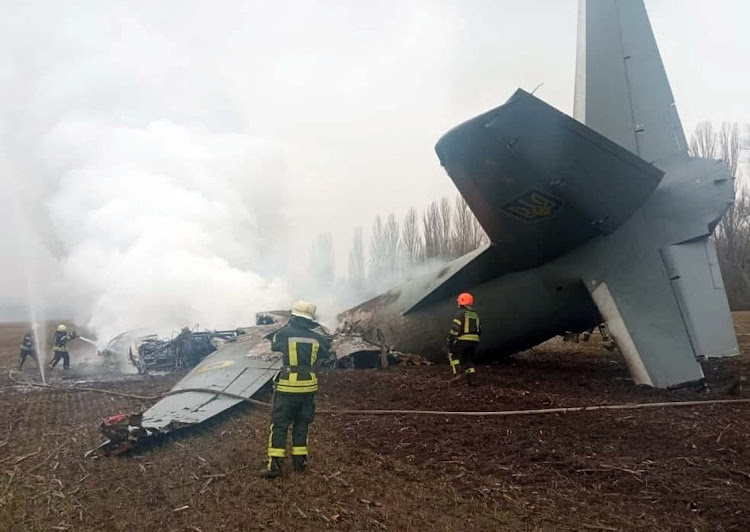 Rescuers work at the crash site of the Ukrainian Antonov aircraft, which, according to the State Emergency Service, was shot down in Kyiv region, Ukraine, February 24 2022. Picture: PRESS SERVICE/REUTERS

In Kyiv, queues of people waited to withdraw money and buy supplies of food and water. Cars stretched for dozens of kilometres  on the highway leading west towards Poland, where Western countries have prepared to receive hundreds of thousands of refugees.

“We're afraid of bombardments,” said Oxana, stuck in her car with her three-year-old daughter on the back seat. “This is so scary.”

Russian forces roll into Ukraine, marking the biggest attack by one state against another in Europe in almost 100 years
World
5 months ago
Next Article