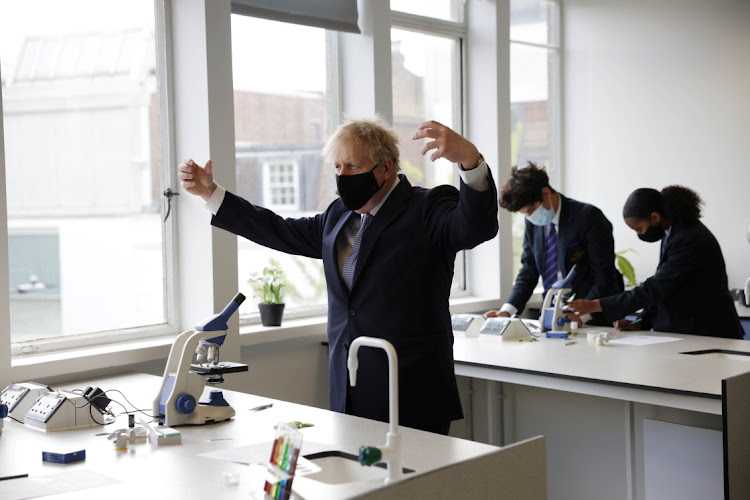 London — As a schoolboy, Britain Prime Minister Boris Johnson appeared to be convinced that the normal rules did not apply to him.

“I think he honestly believes that it is churlish of us not to regard him as an exception, one who should be free of the network of obligation which binds everyone else,” wrote Johnson’s Eton College house master, Martin Hammond, in 1982, as quoted in Andrew Gimson’s biography of the premier.

The approach seems to have stayed with Johnson throughout his career, repeatedly landing him in hot water. For weeks, Johnson’s government has been fending off allegations of “sleaze” — British shorthand for scandals of corruption, questionable sexual behaviour, or other shady dealings

Now the political donations watchdog has opened an official inquiry after concluding there were “reasonable grounds” to believe the law had been broken in the way refurbishments to Johnson’s apartment were paid for.

Potential penalties include fines or criminal charges, depending on which rules may have been breached. On the face of it, just a week away from crucial local elections on May 6, the political price could be high.

Johnson insists he broke no laws and is complying fully with the rules on political funding and the investigations into what happened. “I don’t think there’s anything to see here,” he said on Thursday, describing the row as a “farrago of nonsense.”

While most Conservatives believe their leader will ride out the storm, few are happy about it. One senior Tory figure attributes the premier’s difficulties to his “casual” approach, which has become worse since the pandemic suspended or compromised the usual procedures for holding ministers to account.

In the words of one of Johnson’s own ministers, this “ridiculous” row about expensive wallpaper in the Downing Street flat is typical of the premier’s “carelessness” and shows he probably did not think through the implications of his actions.

Yet overall, Johnson seems to have been right. So far in his career, his disregard for the normal rules of engagement has not held him back for long. In fact, it has been a large factor in his appeal as a politician who isn’t part of the mainstream.

For Gimson, author of Boris: The Making of the Prime Minister, one reason Johnson is so popular and has won over people who voted Labour all their lives is because he deliberately shuns political correctness, speaking out controversially and obviously flouting normal rules.

“Boris makes things interesting, sometimes by things going wrong,” Gimson said. “He has never really been at all conscientious about following rules and he is obviously more tolerant of chaos and strife around him than other people.”

Johnson plays up the performance, too. When he is getting ready to be photographed or to appear on television, the prime minister does the exact opposite of a slickly styled politician. Instead of tidying himself up for the cameras, he runs a meaty hand through his blond hair to make it messy.

He shrugged off allegations of an affair with American businesswoman Jennifer Arcuri, who was given taxpayer funding while Johnson was mayor of London. None of this mattered much in 2019, when he led the Tories to a historic 80-seat majority at the general election.

Tory MP James Sunderland said voters are “very supportive” of Johnson and want a prime minister who is “visual” and outspoken. “Boris Johnson is a personality.”

Sunderland said voters are “not bothered” by the row over the apartment “because this is just another attempt to find sleaze and scandal when it’s just not there.”

One senior party official said the premier would be fine as long as next week’s elections in local English districts go well. At the moment Johnson and the Conservatives are ahead of the Labour opposition in opinion polls.

But the sheer weight of allegations piling up against Johnson and his Conservatives remains a risk. For one thing, regulators may be less tolerant than voters. In 2018 parliamentary authorities rapped him for repeatedly being late in disclosing payments he had received.

In another report in 2019, the authorities were even less impressed that he had failed to register his ownership of a share of a house in the countryside. Parliament’s committee on standards concluded “with concern” that these two investigations demonstrated “a pattern of behaviour” by Johnson.

While he was not trying to hide anything, Johnson displayed “an over-casual attitude towards obeying the rules” along with “a lack of effective organisation” within his office, the panel said. Further breaches could lead to more serious sanctions in future, it warned.

The big danger for the premier is that the investigations take months or longer to conclude, while the drip-drip of allegations continues. Johnson has made an enemy of his former aide Dominic Cummings, who is now on the warpath and ready to give evidence under oath.

In the end, even with a forgiving public, the most popular prime ministers run out of road, according to Gimson. “Every sort of charm wears off eventually.”