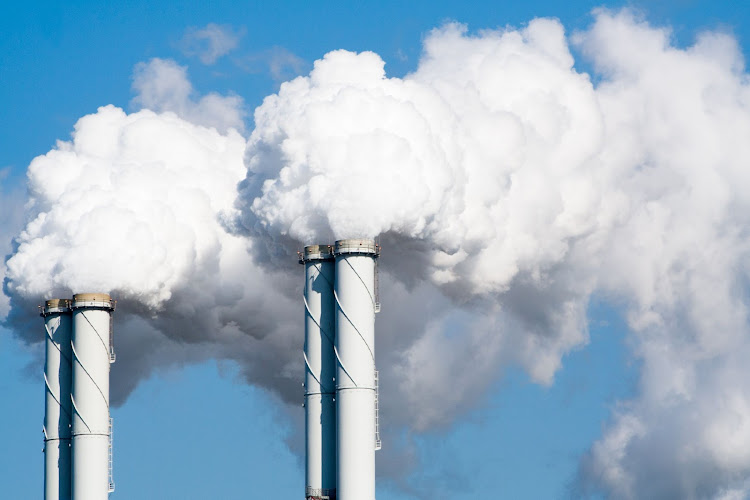 SA must step into the carbon emissions debate not merely to achieve a sustainable future for Eskom, but to reignite our country’s economic growth, the writer argues. Picture: 123RF/VDWOLF

As governments prepare for November’s Conference of the Parties (COP26) summit on averting catastrophic climate change, a glib refrain has begun to echo among developed market capital allocators.

It goes like this: “Let us reduce carbon by divesting ourselves of carbon-intensive assets and exiting carbon-intensive places, and let us do so now.” This is not just glib. It is also ill-conceived, and it is dangerous.

Imagine, for a moment, the consequences for SA if this approach became the policy of nations and investors across developed markets. This country produces the world’s most carbon-intensive electricity, which bloats the carbon footprint of all its people and enterprises.

SA and other carbon-intensive emerging markets run a perilous risk in the climate-change debate. Should we fail to convince developed nations and investors to focus on a fair and orderly transition to reducing emissions globally — instead of rushing to a Pyrrhic victory — we might be starved of international capital flows.

Right now, Europe is thinking about imposing tariffs on imports from high carbon-emission zones. This would hobble SA exports and reduce foreign investment in such industries as vehicle manufacturing. If the exclusion approach gains traction, foreign investors might be inhibited from buying high emitters’ sovereign or corporate debt and equity. This would push up SA’s borrowing costs. 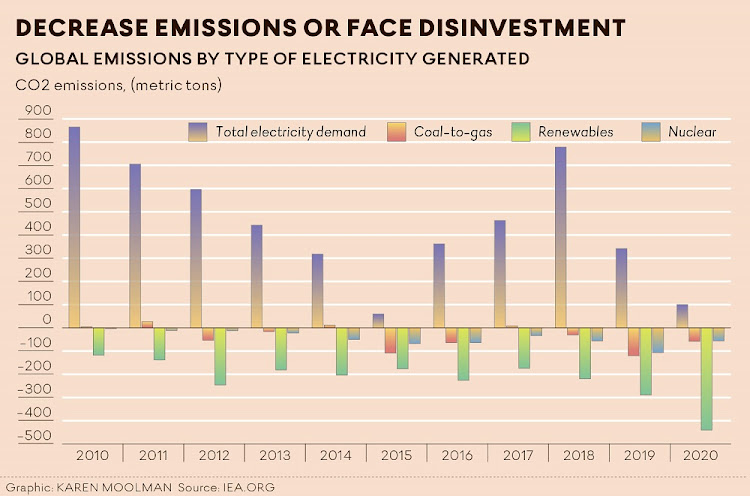 It is cold comfort that SA is but one of many nations that would be penalised. About 90% of future carbon emissions growth is projected to come from emerging markets. If a default “sell SA, buy Ireland” approach takes hold, the decarbonisation efforts of most emerging markets would be severely constrained.

The $2.5-trillion in annual investment emerging markets need to reduce carbon would never arrive. Instead, capital that once flowed freely would concentrate in developed markets and their companies. Most of the world’s 7.9-billion people would be starved of investment. Would the world achieve net zero? No. It would achieve a partial net zero, which is no net zero at all.

Watching in silence is not good enough. To paraphrase Ernest Hemingway, something bad happens gradually, then suddenly. This country must find its voice, and quickly, for its own sake and for emerging markets everywhere. SA can lead the case for a just and inclusive transition — a path to the permanent reduction of carbon emissions that encompasses all the world.

Here is the argument that needs making: emerging markets need time and financial help to reduce their carbon emissions. Our own most compelling proxy for this argument is Eskom, whose travails and challenges provide SA with incentives to enter the global debate and turn the argument.

Let us remind ourselves what we confront with our public electricity utility. Eskom has a large quantum of stranded debt that will need to move off the balance sheet as part of a holistic solution for the entity. The longer it takes, the larger the portion of unsupportable debt. Daunting, yes. But this is also where we find an opportunity.

The global move to achieving net zero carbon emissions by 2050 means SA could tap substantial amounts of climate finance to mitigate the debt the government needs to absorb.

The latest Bloomberg new energy finance analysis of levelised electricity costs finds that in countries representing 46% of the world’s population and 48% of electricity generation, either new photovoltaic (PV) or onshore wind is now competitive with the cost of running typical amortised existing coal- and gas-fired power plants.

Given the 70%-90% plunge in renewable energy prices over the past decade, SA could accelerate the closure of coal power stations and reduce emissions by 1 gigatonne of carbon relative to the Integrated Resource Plan 2019.  In return, the developed world should provide compensation or, in effect, transition finance.

Developed economies have in principle committed to large-scale financial support for developing economies to transition to net zero, but the financial models have yet to be worked out.

SA has an open — though rapidly narrowing — window of time to make the case.  We must do so with urgency, so we are influencing opinion where it matters well before countries meet in Glasgow on November 1. For 12 days, the Conference of the Parties to the UN Framework Convention on Climate Change will gather for their 26th summit (hence COP26).

This summit might be unlike any of the 25 that have come before. It feels like the world is reaching an inflection point. The possible ways forward diverge, and a choice will be made. A consensus will embed and become policy. The low road would be an approach that encourages rapid and large-scale divestment, tariffs and other inhibiting measures. The high road would be an approach that recognises emerging markets need time and investment to make an orderly transition to reducing carbon and, in return, demands that these markets and companies commit to plans that lead to net zero emissions.

SA should as soon as possible initiate talks about a meaningful climate-finance transaction. This country needs to signal it is ready and willing to reduce its carbon emissions in return for compensation — or transition finance.

A deal would encourage an arrangement for all emerging markets. This is the high-road approach that would give the whole world the best chance of achieving a true net zero in emissions. Developed nations would help finance the transition of developing nations. The payoff would be an everlasting reduction in carbon emissions for the whole planet and the avoidance of catastrophic climate change.

The energy transition and related sustainability revolution presents a once-in-a-generation structural change in the global economy. SA should seize the opportunity to transform its economy and regain much needed structural-growth momentum.

This is a moment for SA to lead, to help forge a high road into the future just as the country did in 1994, when we delivered a peaceful transition to a democratic and constitutional order and inspired the world. Then, the ANC had a remarkable chief negotiator, one Cyril Ramaphosa. Now, as president, he can be a powerful voice not just for this nation, but for all developing markets.

This is a moment for the president to shape his legacy and put SA back on the path to prosperity.

• Du Toit is CEO and Moola head of SA investments, at Ninety One.

Amid warnings that policies will be crippling, schemes are sold as a near-utopia that all nations will rush to embrace
Opinion
10 months ago

This has been done in Australia, and is much more effective than decommissioning, write Wayne Glossop and Tord Johnsson
Opinion
10 months ago
Next Article