New iteration of the Judicial Service Commission to vet judges 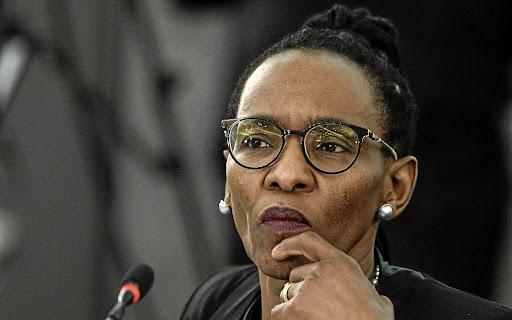 Supreme court president Mandisa Maya is among the 23 commissioners in the Judicial Service Commission (JSC) who will interview candidates for superior court posts from April 4 to 8, 2022. Picture: Gallo Images/Felix Dlangamandla

Chief justice Raymond Zondo, days into his permanent appointment, will chair the process. Zondo will be joined by appeals court president Mandisa Maya, tipped by President Cyril Ramaphosa as the next deputy chief justice. North West judge president Mashangu Leeuw is the third judge sitting on the JSC this time around.

While most of the members of the JSC remain the same, two of its more prominent members are gone: former spokesperson for the JSC Dali Mpofu and one of four chief justice candidates, Griffiths Madonsela. Two newcomers, senior advocates Kameshni Pillay and Sesi Baloyi will beef up the ranks of women lawyers of colour.

The new version of the JSC will sit a year after highly problematic interviews, including for posts in the apex court. The April 2021 sitting, chaired by then chief justice Mogoeng Mogoeng, so concerned a legal nongovernment organisation (NGO) that it took the JSC to court. The Council for the Advancement of the SA Constitution (Casac) impugned 2021’s interviews and through litigation prompted the JSC to rerun them. The reboot took place in October 2021, with the same shortlist as a result.

The latest round of interviews follows more recent controversial interviews. At its February 2022 sitting, with deputy appeals court president Xola Petse chairing, four candidates for chief justice were interviewed. They fielded all manner of questions, including sexist ones posed to Maya who was also the target of innuendo from Mpofu. Gauteng judge president Dunstan Mlambo fielded a barrage of queries based on rumour, with no source cited. The questions were so impudent that Petse eventually ruled that the section must be expunged from the record.

On Tuesday five candidates will vie for two vacancies in the Constitutional Court. Four are senior judges and the fifth, Christopher Dodson, a senior advocate. Fayeeza Kathree-Setiloane, Mahube Molomela and David Unterhalter were interviewed for posts at the apex court as recently as October.

Unterhalter has since served on the bench in an acting capacity, as has Owen Rogers. All the judges have experience acting as apex court justices. Dodson, meanwhile, has acted in the high court in Gauteng. Acting stints are not required, but considered advantageous. With only five candidates running for two jobs, with Keoagile Matojane excluded from the final schedule, all five names will be forwarded to Ramaphosa.

Next, the JSC will interview candidates for the Competition Appeal Court, Land Claims Court, Eastern Cape High Court sitting in Gqeberha, and Free State High Court. The JSC will also be looking for judges president for KwaZulu-Natal and North West. In KwaZulu-Natal, there are three posts at the high court in Pietermaritzburg.

This round of JSC interviews ends on April 8 2022.

After his ordeal, the judge may have added reason to ensure the process is conducted with integrity
Opinion
3 months ago
Next Article