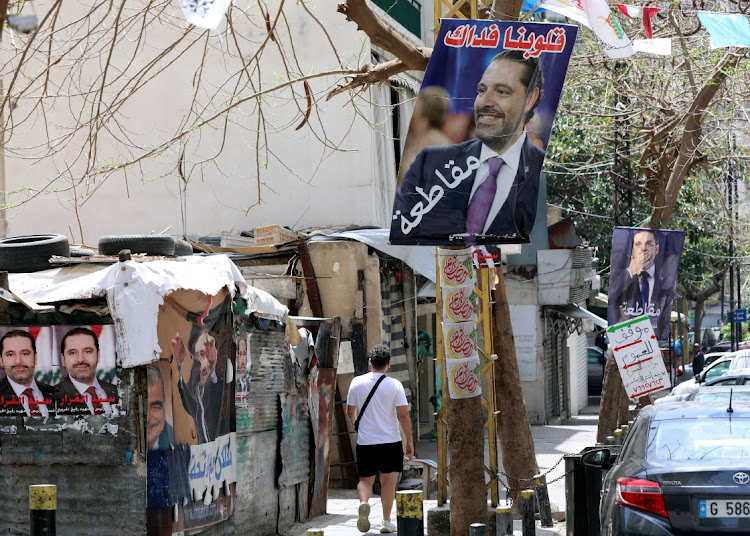 A man walks past posters depicting Lebanon’s former prime minister Saad Al-Hariri, ahead of the parliamentary election that is scheduled for May 15, in Beirut, Lebanon. Picture: REUTERS/MOHAMED AZAKIR

Beirut — Lebanon has seen raging forest fires, damaging floods, and repeated power cuts that are bringing business to its knees. Yet climate change issues are largely absent from the political agenda ahead of parliamentary elections this weekend.

With the economy in free fall and rampant corruption enraging the public, prospective MPs said the climate is not seen as a key concern by voters facing crises on all sides.

“Climate change is an important and crucial topic, but given the overwhelming issues in Lebanon, this issue can wait,” Najat Saliba, a candidate for the Taqaddom opposition party, told the Thomson Reuters Foundation in a telephone interview.

None of the major political parties have outlined a climate policy agenda ahead of the May 15 poll.

The heavily armed, Iran-backed Shiite Islamist group Hezbollah and its allies collectively won 71 of 128 seats when Lebanon last voted in 2018.

The upcoming election is the first since the start of the economic crisis in October 2019, which sparked widespread protests across the country.

Almost three-quarters of the population has been forced into poverty, medicine and fuel are in short supply, and electricity is only available for a few hours a day, in what the World Bank said was one of the world’s worst financial crises in 150 years.

Environmental activists said expanding renewable energy such as solar power and other green policies could help provide long-term solutions to some of the nation’s key woes, and future-proof against further political and economic shocks.

“Renewable energy deployment has a number of advantages, including the creation of jobs, the decrease of local air pollution, and the lessening of our reliance on fossil fuels,” said Carol Ayat, an energy finance expert at the American University of Beirut (AUB).

“This would help protect our economy from external energy shocks while also reducing our [export trade] deficit by lowering our fossil fuel imports, which are a major contributor to our current plight.”

Lebanon’s descent into financial ruin began in 2019, the result of a poorly managed spending binge that pushed up debt, political paralysis as rival factions squabbled and foreign lenders’ reluctance to bail the country out unless it reformed.

The country has not had a 24-hour power supply for decades. But the latest economic crisis has made the situation much worse, with some areas now having access to grid electricity for just two hours a day, or not at all.

Much of Lebanon is powered by private diesel generators, many of which are run by companies, while foreign currency shortages have hampered imports of fuel oil.

According to Lebanon-based policy and research organisation Triangle Research, renewable energy production accounted for less than 3% of total electricity generation in 2018.

Ayat, a senior fellow at the AUB’s Issam Fares Institute for Public Policy and International Affairs, said the government — whoever leads it — should optimise renewable energy generation.

“Any energy reform strategy should seek to provide all Lebanese with the cheapest, cleanest and most long-lasting electrical supply feasible,” she said.

The patchy power supply has sent ripple effects across society, from hospitals forced to put off life-saving surgery and schools having to close their doors, to bakeries unable to produce bread, a cheap staple food for struggling families.

At one Beirut hospital, Karim Mdallal told the Thomson Reuters Foundation he had shattered both his arms and legs after falling down the stairs in an accident, but had yet to be operated on.

“My surgery was set for today, but it was cancelled due to power outages. I’ll have to wait a few more days,” he said.

While energy supply may be among Lebanon’s most pressing environmental issues, it is far from the only one.

Lebanon has for years struggled with waste disposal: “garbage mountains” dotted around the country have become a symbol of the government’s inability to provide basic services.

The country is also facing climate-linked disasters, from heavy coastal floods that destroyed crops in 2021 to forest fires that razed homes, which Ayat said required policies to reduce the risks and keep people safe.

Even as environmental campaigners point to the need for action to promote clean energy and climate resilience, they hold out little hope.

National politics has been dominated by a handful of parties for the past 30 years. Some political experts have suggested Sunni figurehead Saad al-Hariri’s recent withdrawal from politics is likely to cement Hezbollah’s hold on power.

But this weekend’s elections will include voices pushing for change, from a raft of independent candidates.

Ziad Abi Chaker, an environmental and industrial engineer who is running as an independent in Beirut, is one of the few candidates to have mentioned the climate crisis.

Abi Chaker, whose key policies include pushing for the introduction of a zero-waste recycling plant in Beirut’s suburbs, acknowledged gradual reforms would not be enough — but said any step forward would be progress.

“Incremental change is better than no change or going backwards, especially in Lebanon,” he said.