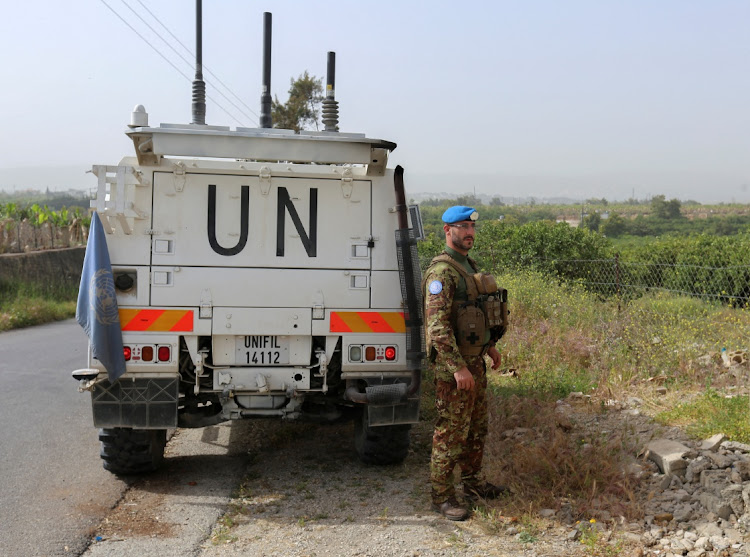 A UN peacekeeper stands next to a UN vehicle in southern Lebanon, April 25 2022. Picture: AZIZ TAHER/REUTERS

Jerusalem  — A rocket launched from Lebanon on Monday struck harmlessly in Israel, which responded with artillery fire, in an apparent spillover of Palestinian-Israeli confrontations at Jerusalem’s Al-Aqsa mosque.

Flare-ups along the Israeli-Lebanese border are rare and Israel’s chief military spokesperson, Brig-Gen Ran Kochav, estimated that Palestinian groups in Lebanon fired the rocket, which he said hit open ground in northern Israel.

“We believe ... this is linked to the Muslim holy month of Ramadan and the riots on the Temple Mount,” Kochav said on Israel's Kan Radio.

He was referring to clashes over the past two weeks between Palestinians and Israeli police at Al-Aqsa mosque, Islam’s third-holiest site. The complex is revered by Jews as the site of two ancient temples.

On Twitter, the Israeli military said it fired dozens of shells at “open spaces in south Lebanon, near the launch area, and also at an infrastructure target”, which it did not identify.

Small Palestinian factions in Lebanon have fired sporadically on Israel in the past. But the border has been largely quiet since a 2006 war between Israel and Hezbollah guerrillas, who have sway in southern Lebanon and an arsenal of advanced rockets.

Aroldo Lazaro, head of the UN Interim Force In Lebanon (Unifil), has urged “calm and restraint”, the mission said on Twitter.

At least 57 Palestinians were injured on Friday in confrontations with Israeli police within Al-Aqsa compound, medics said. Police said they intervened when hundreds of Palestinians hurled rockets and fireworks.

The surge in violence has raised international concern of wider conflict, particularly a repeat of last year’s war between Israel and Hamas Islamists ruling Gaza.

Palestinians accuse Israel of restricting Muslim worship at Al-Aqsa while not doing enough to enforce a long-standing ban on Jewish prayer at the compound, visited by Jewish pilgrim groups during the recent Passover holiday that coincided with Ramadan.

It says Palestinians clashing with police impede Muslim freedom of worship, and that it is adhering to a “status quo” in the area, part of territory captured in a 1967 war, under which only Muslims are permitted to pray in the complex.

Iraq is the fifth most vulnerable country in the world to extreme temperatures and water shortages, according to the UN Environment Programme
World
2 months ago
Next Article