The example can be set for men, who are lagging behind women in getting the jab 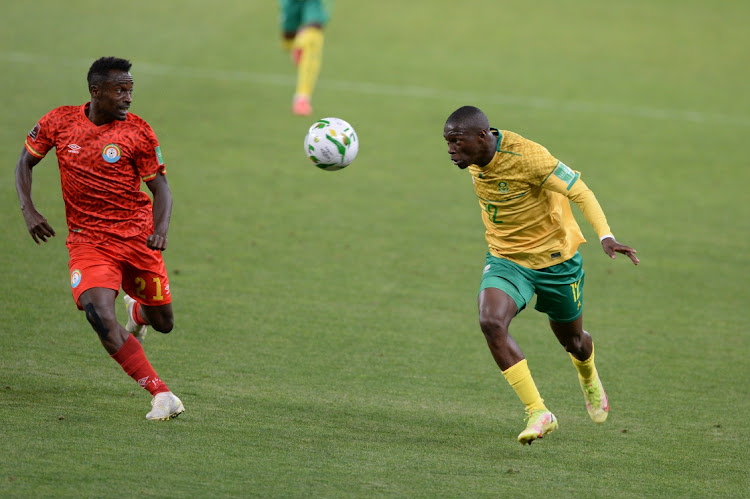 Bafana's Bongokuhle Hlongwane and Asrat Tunjo of Ethiopia tussle for the ball during the 2022 Fifa World Cup qualifier match between SA and Ethiopia at FNB Stadium in Johannesburg on October 12 2021. Picture: GALLO IMAGES/LEFTY SHIVAMBU

Our national men’s soccer team have been on a winning streak for once. But Bafana Bafana’s victory against Ethiopia in a World Cup qualifier last week was not exciting just because of the score — it was the first match played in front of a live audience since Covid-19 reached SA in 2020.

Even more importantly, the condition under which 2,000 spectators were allowed to attend the FNB stadium was that they had to be fully vaccinated. That is a welcome taste of things to come in SA sport.

The Premier Soccer League is looking to draw on the lessons to enable vaccinated fans to attend the dozens of league matches still to come in the current season. Rugby is planning to follow suit too, as is cricket.

The vaccination rollout has opened the way for SA’s millions of avid sports fans to start getting back to the stadiums safely. And crucially, sport can at the same time provide leverage to get SA’s faltering vaccine rollout up to speed again. That in turn is what is urgently needed to save lives and enable the economy to open up on a sustainable basis.

More than 20-million doses of vaccine have now been administered at public and private sector sites, so that about 35% of SA’s adult population have received at least one jab and 27% are fully vaccinated. That is a huge achievement, but it is not nearly enough if SA is to meet the target it set itself to vaccinate more than two-thirds of the population by the end of 2021.

Official figures show more than 88,000 South Africans have died as a result of the pandemic, though the real figure — measured by analysing excess deaths — is estimated to be almost three times more. With the fourth wave due in December, Discovery has projected that 25,000 lives could be saved if SA delivered on its vaccine targets.

SA now has plenty of supply, but the problem is demand. After hitting a peak of more than 1.2-million doses a week in September, the rollout has slowed down dangerously, whether because of vaccine hesitancy, apathy, access issues or a combination of all three.

The hesitancy or apathy is much stronger among men — the latest numbers show only 42% of adult men have been vaccinated as against 57% of women. That is one reason sport is a perfect vehicle to persuade people to get vaccinated. Not that women do not watch sport, but a strong message from SA’s sportspeople to all those male fans that getting the jab is the macho thing to do could only be helpful. Offering the incentive that if you get one (or two if it’s Pfizer), you can also get into the stadium is even more persuasive.

Vaccine mandates in the workplace are perfectly legal in terms of the Occupational Health and Safety directive issued by the government, and we would argue essential to ensure safe workplaces for all — not to mention saving lives and livelihoods. But they do arouse controversy and contestation and may feel like compulsion. Not so when vaccine mandates or “health passports” are needed to get into a sport match — or indeed a concert. That’s more carrot than stick, opening up a leisure activity that was not possible before.

The experience of France, where president Emmanuel Macron in July mandated that anyone wanting to get into a bar or restaurant, sports or music venue, had to show a vaccine passport, was that the notoriously hesitant French complied at speed. Since then, the number of vaccinated individuals has jumped from 30-million to more than 50-million.

Ideally SA would mandate vaccines for restaurants and the tourism industry too. And it is not just the mandating that is needed but the messaging: SA must get strong, consistent and repeated messages from the top that vaccines are the only way to save lives and save our economy. And it needs to act urgently to find ways to get people to take the jabs that are on offer, for free.

Contrary to what the critics say, toll roads may ultimately benefit the poor more than the rich, because of their positive economic effects
Opinion
1 month ago