A decorated soldier, Powell died due to complications from Covid-19 while being treated at Walter Reed National Medical Center, his family said 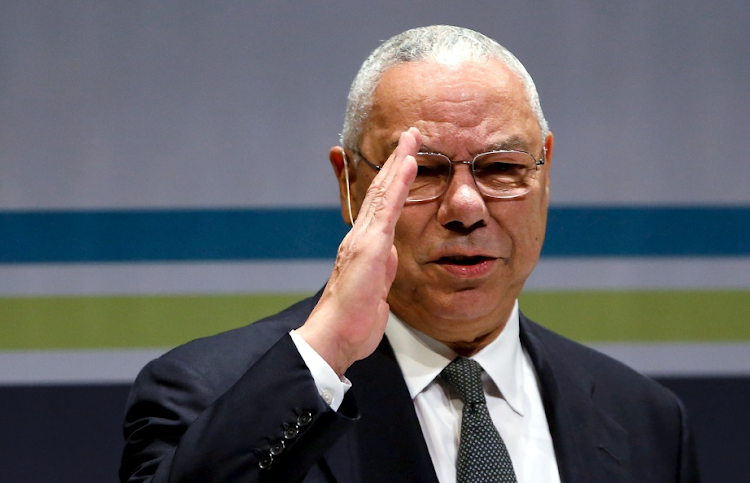 Former US Secretary of State Colin Powell salutes the audience as he takes the stage at the Washington Ideas Forum in Washington, US, in this September 30 2015 file photo. Picture: REUTERS/JONATHAN ERNST

Colin Powell, who was born in Harlem to Jamaican immigrants and rose to become the first African-American to be US secretary of state and chairperson of the Joint Chiefs of Staff, has died. He was 84.

Powell died on Monday due to complications from Covid-19, his family said on the general’s Facebook page. Powell was fully vaccinated and was being treated at Walter Reed National Medical Center, the family said.

A decorated soldier who started as a second lieutenant, a rank earned as a Reserve Officer Training Corps student at City College of New York, Powell served in Vietnam, West Germany and South Korea before being put in charge of the 1990 Gulf War as chairperson of the joint chiefs of staff.

In the allied effort to help Saudi Arabia and Kuwait defend against Saddam Hussein’s Iraq, he developed the so-called Powell Doctrine. It called for using overwhelming force, such as “shock-and-awe” battle tactics, to assure victory and minimise casualties once diplomatic solutions prove unworkable. He styled himself the “reluctant warrior.”

Admired for his mix of military discipline and sunny optimism, Powell was often urged to run for president. Tall, solidly-built, with salt-and-pepper hair and an easy smile, he represented to many an American ideal of hard work and equal opportunity. The author of four books about himself, he argued that he was part of a new generation of accountable leaders.

“Many of my generation, the career captains, majors, and lieutenant colonels seasoned in [Vietnam], vowed that when our turn came to call the shots, we would not quietly acquiesce in halfhearted warfare for half-baked reasons that the American people could not understand,” he wrote in “My American Journey,” published in 1995.

Such idealism proved elusive, however, in the 2003 Iraq War to oust Hussein. As secretary of state, Powell was given the task of justifying an allied invasion. In a speech to the UN that included pictures he said were of mobile arms laboratories, he asserted there was “no doubt” that Hussein had hidden chemical and biological weapons.

But the following year, Powell told Congress that the evidence he had been given was “wrong,” and the speech “a blot” on his record.

“It was painful,” he told interviewer Barbara Walters in 2006. “It is painful now.”

Powell had two other blots on an otherwise lauded record. In the first, he was assigned to investigate the 1968 US massacre at My Lai and found no wrongdoing. And as President Ronald Reagan’s national security adviser, he was part of an administration that illegally traded arms for hostages in what became known as the Iran-Contra scandal. He was not personally implicated in either case.

After serving as the top US official in the Gulf War, he was considered as a Republican vice-presidential candidate in the 1992 campaign and was urged to run against President Bill Clinton in 1996. He declined but actually won the GOP New Hampshire primary based on write-in votes.

In 2000, he declined to run again. The winner, George W. Bush, appointed him secretary of state, a post from which he resigned in 2004 when the evidence on Iraq’s weapons of mass destruction was shown to be false. His resignation prompted some to lament the loss of a moderating voice within the administration and others to urge his successor to play a bigger role in policy decisions.

After his retirement, Powell leant more liberal, quietly campaigning against the nomination of John Bolton to be ambassador to the UN. He supported affirmative action and criticised the Bush administration on its treatment of detainees at the Guantanamo Bay detention facility and its handling of impoverished victims of Hurricane Katrina. In 2008 and 2012, he endorsed Barack Obama, a Democrat, for president. In 2016, he supported Hillary Clinton over Donald Trump.

Powell was awarded the Medal of Freedom, the highest US civilian decoration.

Colin Luther Powell was born on April 5, 1937, in New York City to Maud Arial McCoy and Luther Theophilus Powell, a shipping clerk whose ancestors were African and Scottish.

He received a bachelor’s degree in geology from the City College of New York in 1958 and an MBA degree from George Washington University in 1971, after his second tour in Vietnam.

In 1962, while on patrol in South Vietnam as one of 16,000 military advisers, Powell was wounded by a punji-stick booby trip and was awarded a Purple Heart. He also won a Bronze Star and later the Soldier’s Medal for rescuing comrades after a helicopter crash.

After studying at the Army War College and a serving in Korea as a battalion commander, Powell got a staff job at the Pentagon and was promoted to one-star general in charge of a brigade of the 101st Airborne Division. In 1983, he was an aide to secretary of defense Caspar Weinberger in the first Reagan administration. He later served as an aide to Reagan’s national security adviser Frank Carlucci before Reagan gave him Carlucci’s job. In that role, he advised Reagan on summit meetings with Soviet President Mikhail Gorbachev as the Cold War was ending. Reagan made him chairman of the joint chiefs in 1989.

Powell retired from the army in 1993 with the rank of four-star general.

Powell married Alma Vivian Johnson in 1962. The couple had three children: Michael, who was chairman of the Federal Communications Commission from 2001 to 2005, Linda, an actress, and Annemarie.

US president calls for round-the-clock operations at ports to clear backlog of roughly 500,000 containers
World
7 months ago
Next Article