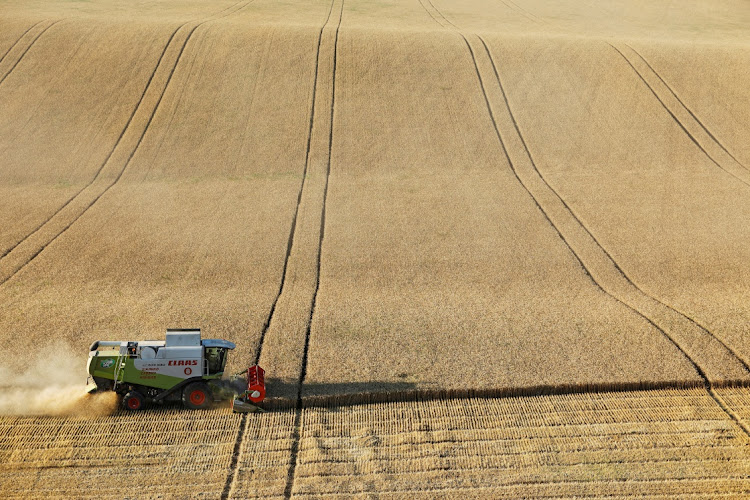 A combine harvester harvests wheat in a field near the village of Suvorovskaya in Stavropol Region, Russia, in this July 17 2021 file photo. Picture: REUTERS/EDUARD KORNIYENKO

Global wheat supplies are already set to be very tight by mid-2022, but top producer China’s struggling wheat crop could keep a chokehold on stocks into 2023.

That means China might keep its role as a key wheat importer over the next year or so, which may work in its favour given its recent trade agreement with top exporter and now global pariah Russia.

China’s agriculture minister said earlier in March that the country’s wheat crop conditions could be the worst in history after heavy rainfall delayed planting last autumn. The harvest will provide supplies for the upcoming marketing year that lasts to mid-2023.

That is a highly unusual titbit for China to share as it normally likes to keep troubles out of the public eye. Beijing has cut off data streams and shut down Chinese analysts within the past year to prevent the spread of possibly compromising supply and demand information to global traders and analysts.

China’s wheat crop is the largest in the world, three times larger than the US crop and almost 80% larger than No 1 supplier Russia. Beijing keeps plentiful state stockpiles of wheat and incentivises farmers to continue production by supporting prices, all intended to ensure food security.

China’s wheat imports have been on and off over the decades, but they have been back on in the past two years as domestic consumption surged without matching production, along with a general drawdown of grain supplies in the country and rising global prices.

The Asian country is unique compared with other major grain importers, which do not produce nearly enough to meet needs. China’s vast maize and wheat imports cover less than 10% of its annual demand, while other buyers may be satisfying between 40% and 100% of domestic needs with imports.

Officials have confidence that a big grain harvest is still on the cards, but the recent statement on poor crop health raises eyebrows. The success of China’s grain crops is critical this year given Beijing’s recent claims it can reduce soya meal rations in animal feed to sharply curb its massive reliance on foreign soya beans, all while increasing meat output.

China’s future participation plans in global agricultural trade is one of the biggest market mysteries, but there is no shortage of mixed signals. President Xi Jinping, discussing food security at the weekend, said grains should be imported “appropriately”, but China “must not rely on the international market”.

However, during a presentation for the US department of agriculture’s annual outlook forum late in February, China’s agriculture ministry director-general touted the importance of global agricultural trade, particularly with the US, saying China would “only open wider to the world”.

Trade opportunities did in fact open wider in early February when China approved imports of Russian wheat and barley, part of a larger trade agreement including oil and energy that was hatched at the start of the Beijing Olympics.

Russia has been heavily sanctioned by Western countries over its invasion of Ukraine. Moscow announced plans on Tuesday to restrict certain imports and exports for security reasons, though specifics were not immediately available.

Western intelligence last week revealed Chinese officials asked Russia to hold off on its Ukraine invasion until after the Olympics, which Beijing has denied. But if true, and if Russian commodities like wheat and energy are among restrictions, it will be very interesting to see whether China is still able to secure them as expected.

Top wheat exporter Russia’s invasion of major grain supplier Ukraine, and the subsequent collapse of shipments out of the region, have driven global wheat prices to record highs. Price increases were already steep in 2021 on shrinking world supplies.

Global wheat stocks including China are predicted by midyear to have fallen 2% over the past four years compared with a 12% decline when excluding China. Global stocks-to-use ratios among major wheat exporters, including Russia and Ukraine, are set for record lows this year.

JSE-listed SA retailers such as Shoprite and Walmart-owned Massmart are steeling themselves for a far tougher inflationary environment.
Business
5 months ago

Amid all the talk about energy independence, few have considered the vulnerability of agriculture imports
Opinion
5 months ago

The effects of fertiliser and fuel price hikes will be transmitted to food retail prices, in turn affecting consumer prices in the short term
National
5 months ago
Next Article