Under the ANC-PA-Irasa coalition government, Ekurhuleni has become broken and downgraded 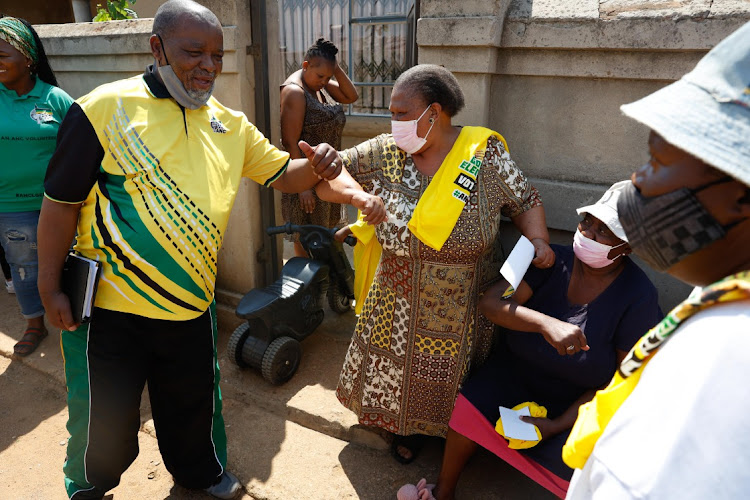 ANC chairperson Gwede Mantashe speaks members of the community of Daveyton during the ANC's door to door campaign in Ekurhuleni ahead of the local municipality elections. File photo: THULANI MBELE

For the residents of Ekurhuleni, these elections could not come sooner. Over the past five years, under the ANC-PA-Irasa coalition government, Ekurhuleni has become broken and downgraded.

Unemployment is at 39%. Service delivery has collapsed — as pointed out by the public protector, who found the city to have failed in upholding its constitutional mandate by not providing adequate waste management.

The coalition government in Ekurhuleni cannot keep the lights on. Ekurhuleni experiences well over 1,000 power outages daily because it simply cannot maintain or service its infrastructure and fails to fill funded vacancies in the energy department.

The city is failing to build new infrastructure: a perfect example is the substation in Phomolong, Thembisa, which at a price of R70m is nothing but a small building surrounded by an open field.

To add insult to injury, Ekurhuleni is a water scarce municipality where residents can sit for extended periods without water. Why? Instead of spending money on new water reservoirs, funds have been siphoned off through virements to purchase personal protective equipment (PPE) — an acronym synonymous with looting.

There are business parks, taxi ranks, trading stalls and housing projects rotting away because instead of investing in people, listening to their needs and being responsive, mayor Mzwandile Masina and his acolytes prefer to practice fiscal dumping. These have become white elephants.

While the auditor-general may give the city a clean audit, the lived experiences of residents in no way mirrors the auditor-general’s findings. In the 2019/2020 financial year the auditor-general flagged a combined amount of R17.4m worth of fruitless, wasteful and irregular expenditure. While this may seem like a large amount, the physical wastage I have seen on the ground pales in comparison to this figure.

A round-up of election news, views and analysis from politicians, voters and commentators
Politics
1 month ago

It’s a pity the auditor-general does not conduct physical oversight of projects rolled out by the city to see the effect of finances spent. If this was done that clean audit would vanish in the blink of an eye.

I have lived in Ekurhuleni for the past 20 years. The lived experience of residents are my lived experiences — I too am subjected to the same poor services rendered by this municipality.

Thankfully, on November 1 residents can usher in a government that works for them. A government that will get things done. And it’s not rocket science — the wheel does not need to be reinvented. It’s about getting the basics right, because if the fundamental functions of a municipality do not work unemployment, crime and a collapsing economy will continue to be the status quo.

The DA has a plan to get this city going again, for the better. The first order of business will be to gain control of finances and stop the fruitless and wasteful expenditure. The primary service delivery issue will be to deal with the ageing infrastructure: build new and maintain existing.

A DA-led government will ensure funded positions that are vacant within the electricity are filled as a matter of urgency. We will also work with retired engineers and technicians who are still fit to return to service. It is important to also engage contractors who live in Ekurhuleni and have the expertise to fix the infrastructure challenge.

Furthermore, we will work on decreasing the city’s reliance on Eskom and pass a motion that invokes the promulgated Act 10, which allows for the sourcing of alternative energy from independent power producers (IPPs).

This will be similar to what the DA-led Stellenbosch municipality is currently doing. An audit will also be conducted on vacant land to look into the viability of establishing wind farms, as is currently done in DA-Kouga. DA-George has the first solar power airport, which generates excess energy to power up over 200 households. DA-Ekurhuleni will also explore converting waste into energy.

Many government contracts issued in this metro are questionable, such as the infamous R62m that was paid to a company to conduct the bungled, messy, inaccurate valuation roll. Some 71.5% of Ekurhuleni contracts are issued to companies that are not based in Ekurhuleni. There are skills and talents in this city and charity begins at home. A DA-led Ekurhuleni will review these contracts and also compare that against the 4,000 vacant funded positions.

Financial sustainability and accountability with proper planning of projects are key to a successfully functioning city: these aid in service delivery. The cornerstone of good governance is having a firm grip on the issues that affect residents — communication and consultation. It is about fostering an environment conducive to economic growth to get our people working and eradicating unemployment.

And it can be done, because the best run municipalities in SA are all run by the DA. Under a DA government, the City of Ekurhuleni will start “getting things done” — get the basics right and deliver services to residents.

There’s been a proliferation in the number of small parties and independent candidates entering the ring ahead of the local government poll. It’s ...
Features
1 month ago

In a municipal landscape of pervasive failure and underperformance, Midvaal and Senqu are two of very few standout stars. Their municipal managers ...
Features
1 month ago
Next Article

Tshwane vows not to bow to Samwu in applying wage deal

Turnout will be critical for Western Cape election outcome

Tshwane vows not to bow to Samwu in applying wage deal

Turnout will be critical for Western Cape election outcome