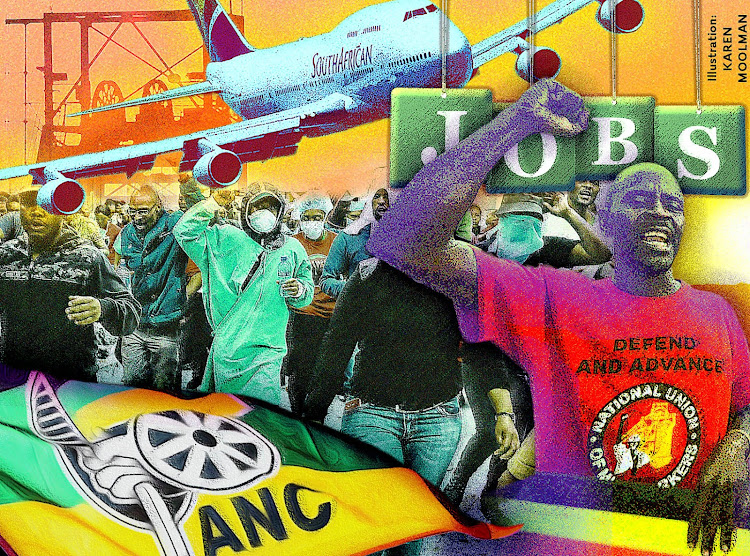 All the plans devised to reignite the economy of the country will be stillborn so long as the ANC continues to pursue its socialist/communist programme. Even as Tito Mboweni proclaims his plans for the recovery, the ANC persists with its plans for expropriation of property without compensation, compulsory equity transfers, control of the “commanding heights” and the dogged pursuit of the communist-inspired national democratic revolution.

The ANC is surely the only governing party in a constitutional democracy, under the rule of law, that remains wedded to the rhetoric of revolution. The melancholic truth is that, over a period of 25 years of ANC rule, the country has been systematically legislated for failure. A country with the natural resources, natural skills, enterprise and sound infrastructure of SA does not fall into poverty through misadventure. It happens by design.

At the beginning of the democratic era 25 years ago, SA was one of the most admired countries worldwide. Coupled with the existing benefits, the wellspring of international goodwill was sufficient to have sustained a rate of economic growth that would have quickly overcome all the residual social and economic problems, endemic inequality included. The country might also have had one of the best, instead of one of the worst, education systems in the world.

Instead of capitalising on the existing benefits, the ANC set about a systematic process of destruction. Motivated by its communist and trade union allies, as well as its own ideological inclinations, it began a programme not to undo the bad laws of the past, but to install a raft of new bad laws, each with an underlying hostility towards individual liberty, private enterprise and the resultant creation of employment opportunities.

Existing labour legislation was broadened and intensified in a way that cast the employer as the villain and the process of employment of labour as a manifestation of exploitation. In the process, the perceived victimhood of the employee became the actual subordination of the employer. The result was plainly predictable: the relationship between employer and employee became increasingly adversarial, with the diminishing spoils of the economy the prize of contestation.

The attempt to clean out the Augean stables of state corruption over a period of 10 years has been systematically thwarted by the acknowledged fact that known criminals in state employ enjoy statutory protection of a sort that makes it practically impossible to effect the removal of their toxic presence from state and quasi-state enterprises.

What is seen instead is the “redeployment” of “cadres” to other high-paying positions, frequently at a higher salary and with more status than that for which they are at present disqualified. This is particularly evident in political and related activities.

The disincentive of productive enterprise also goes to the source of economic activity. In mining, it has long been the practice that in order to obtain or retain licences, which, under the revised mining dispensation, are awarded at the government’s pleasure, several onerous (and financially ruinous) preconditions are imposed in exchange for the privilege conferred. These include a list of social obligations — more properly the terrain of governmental responsibility — and the requirement of equity transfer for the purposes of BEE, the proportion of which has grown over the years.

The result of these disincentives to the risk of mining production is that the industry has shrunk to a fraction of its former size, with many companies having exited the industry for more profitable and less onerous opportunities abroad. Foreign funding of this capital-intensive industry has disappeared.

Then there is the government’s obdurate insistence on maintaining its hold on insolvent state-owned enterprises (SOEs). These have been eviscerated by years of gross mismanagement and theft, which has put enormous strain on state finances as a result of the persistent demand for working capital. Eskom and SAA are two prime examples, but there are many more besides. Partial or complete privatisation is the only viable alternative, but a socialist/communist agenda stands in the way.

The government’s insistence on proceeding with the potentially ruinous National Health Insurance (NHI) plan, notwithstanding the complete absence of a comprehensive costing exercise, is a further example of how ideology prevails over common sense. Those who have done the exercise have produced figures that would be unaffordable, even for an economy not already burdened by the incurred costs of Eskom, SAA and others.

Contagious culture of graft has created thugs in suits

In addition, knowledgeable individuals have expressed the view that the implementation of the plan would lead to an exodus of health-care professionals and the resultant collapse of this critical service. The one trial run of the programme, undertaken on government initiative and at the cost of billions, produced no discernible positive results.

Dedicated taxation is not used in a dedicated way. The fuel tax, which comprises about 40% of the pump price, is nominally used by the government to build and maintain the roads system. In practice, new roads and some existing ones attract an additional tax in the form of toll fees and the much-despised e-toll system in Gauteng. What then happens to the 40%? It goes, one may surmise, on to a general account from which Eskom, SAA and others are maintained on life-support.

SA taxpayers are burdened by one of the most onerous tax regimes in the world. This would be bad enough if there were commensurate benefits to be derived from the taxation, but this is not so. In addition to the inordinately high levels of personal tax, the individual must provide, at own expense, health care, schooling, security, pension and other related benefits normally associated with high rates of taxation. Tax is paid twice over.

This is yet another reason for the high rate of emigration from the country. An eminent politician once said of this phenomenon, “good riddance”. Sadly, it is the best and most productive individuals who have chosen to go this route. It has now been statistically demonstrated that the majority of those leaving are black.

The National Minimum Wage Act is a law against the employment of those most in need. Under the guise of a benevolent purpose, those who are desperate for work have been systematically priced out of the jobs market. It may be that a wage lower than the statutory minimum amounts to exploitation, but that is not how those who would work, if only they could, will see it. To secure its monopoly on employment, organised labour sees nothing besides the issue of exploitation.

The terms of a contract of employment are a matter exclusively for the contracting parties to determine. The government has no right to interfere, especially not when the freedom of choice is destroyed. It is also not a good idea for a country whose unemployment rate approaches 40%.

In the first quarter of 2019 unsecured credit rose 10.5% compared to asset backed borrowing such as mortgages which rose by 4.9% in the same period.
Economy
2 years ago

SAA quandary can allow entrepreneurs to take off