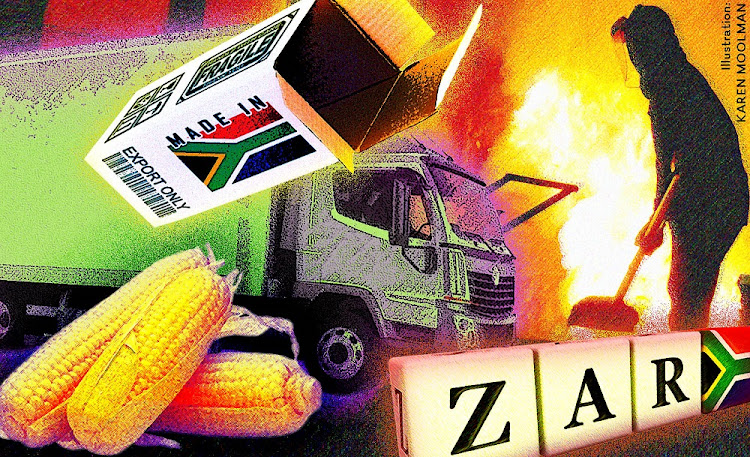 It is encouraging that the presidents of the world’s two biggest economies, the US and China, managed to reach a truce in their trade war during talks on the sidelines of the Group of 20 summit in Osaka. There had been concerns over the softening of global economic growth, underlined by trends in the first half of 2019 as trade and manufacturing decelerated.

Current forecasts point to 2.6% global growth in 2019. This is the weakest growth since the global financial crisis, which is emblematic of the extent of the negative effects of the trade war and heightened policy uncertainty on business confidence.

Unfortunately, these international developments have ramifications for exports from smaller economies such as SA. There are ongoing concerns with regard to the export-orientated manufacturing and agriculture sectors in particular. The former has focused on the diverse metals and engineering cluster of industries, and the latter on strategic labour-intensive soft commodity subsectors.

Domestically, businesses are faced with worrisome operational dynamics across the board, including the recently introduced carbon tax — an implicit tax on businesses — high electricity costs, unpredictable petrol prices, changes in factors affecting supply, and a volatile exchange rate, which all compound operational costs.

In manufacturing, low demand and rising intermediate input costs are creating a challenging functional environment for key steel subindustries, which employ more than 160,000 people. In addition, lower labour costs or overheads and cheap production from efficient and heavily subsidised East Asian steel producers are worrisome to local producers. This, in addition to weak regional and global demand, accounts for the generally poor export performance of the metals and engineering cluster in the first quarter.

Despite an increasingly challenging global outlook, this cluster’s annual trade balance narrowed by 15.9% in nominal terms or roughly $7.7bn during 2018, with exports increasing 12.9%, as opposed to a less-than-proportionate increase in imports of 3.2%. The pattern of export destination trends remained little changed in 2018, despite variations in the percentages, with Africa, Asia, Europe and the Americas the largest export destinations.

Though there is potential to increase trade with the rest of Africa and the Americas, the recent lifting of US tariffs on Canada and Mexico will impact negatively on steel and aluminium orders from SA companies. However, the Americas still hold promising prospects for manufacturing and agricultural products, underpinned by increasing market shares and growing demand, which will slowly push up global steel and maize prices in the near term.

The African Union has established the operational phase of an African free trade agreement on July 7 2019. Inter-country trade is exceptionally low in Africa compared with Asia and Europe, but the agreement could create $3.2-trillion in trade within the continent.Deputy editor of Business Day, Tiisetso Motsoeneng reports.

In SA agriculture, erratic weather conditions continue to be a challenge, with the sector having contracted by 4.8% in 2018 and remaining in contractionary territory in the first half of 2019 due to lower output in a number of subsectors. But the picture is not completely bleak. SA’s agricultural exports reached a record level of $10.6bn in 2018 and started 2019 with a positive trade balance again. The performance was underpinned by grapes, wine, apples, pears, wool, fruit juice, apricots, cherries, peaches and maize.

The future growth of SA’s agricultural sector is heavily reliant on exports. The country already exports about 49% of its agricultural products in value terms, so a slowdown in global growth, and subsequently demand, would have a pronounced negative effect on the sector. That said, the newly launched African Continental Free Trade Area (AfCFTA) has the potential to open new doors to SA products. This would practically mean an increase in the share of SA’s agricultural exports going to the continent, rather than focusing on growing other well-established markets.

Will Africa’s free-trade area live up to the hype?

Africa is moving towards a more integrated, rules-based trade regime, but this is unlikely to transform the continent’s economic prospects
Features
3 years ago

Such a relationship would not be one-way. SA remains an importer of poultry meat (edible offal of fowls), rice, wheat, sugar, palm oil, soya-bean beer, fish, sunflower oil, soya-bean oilcake, tobacco and live cattle, among other agricultural commodities. Other African markets also have room to increase their participation in the SA market by supplying more products.

Admittedly, most African countries do not have the capacity to export a much larger share of the agricultural products SA might require. But the onus lies with their governments and industries to realise there is demand in the continent, and to start investing in production and providing an enabling environment for such industries to thrive. This would be mainly applicable to countries with climatic conditions that are more favourable than semi-arid SA.

Africa has the most potential as an export destination for both the SA metals and engineering and the agriculture cluster. AfCFTA will eventually make 90% of trade within the continent duty-free, so further export growth is expected in both clusters. Though African countries will be deprived of about 6% of the revenue currently derived from trade tariffs, it should not be a zero-sum game as countries will eventually benefit from trade creation, production diversification, job creation, industrialisation — with increased corporate income tax revenue as a corollary — and higher personal income tax revenue.

However, the continent is beset by other systemic problems such as poor quality or lack of infrastructure, unconducive business environments that make trade across borders particularly costly, corruption and weak institutions, which render legal recourse and dispute settlements redundant. AfCFTA’s potential to unlock further growth in trade will be wasted if these issues are not addressed. The precedent set by AfCFTA, of African countries collaborating politically and economically, must translate to deep and fundamental reforms that unlock the existing barriers to intraregional trade.

The make-or-break moment of AfCFTA will come when trade under the agreement officially begins in July 2020. Though the African Export-Import Bank has reserved $100bn to help member countries alleviate trade adjustment costs and facilitate the creation of a common payment system, concerns still remain.

Previous experiences with regional economic communities such as the Southern African Development Community (SADC) show that tariff phase-downs have been matched, and often exceeded, by non-tariffs barriers such as the plethora of documentation needed for cross-border trade transactions, administrative bottlenecks and stipulated trade quotas aimed at curbing the quantity of traded goods.

The extent of these barriers has in effect been to reverse the potential gains of the SADC free-trade area. In the AfCFTA scenario, policymakers have belatedly but encouragingly indicated that non-tariff barriers will be given equipollent attention as they could threaten the growth of intra-African trade and impede the effective implementation of the agreement.

Kenya, Ghana, eSwatini, Madagascar and Egypt are all in the race, while Ethiopia and Senegal have pulled out
World
2 years ago
Next Article

Gender equality is essential if the AfCFTA is to succeed

AfCFTA is officially in force — now the real work begins

Gender equality is essential if the AfCFTA is to succeed

AfCFTA is officially in force — now the real work begins