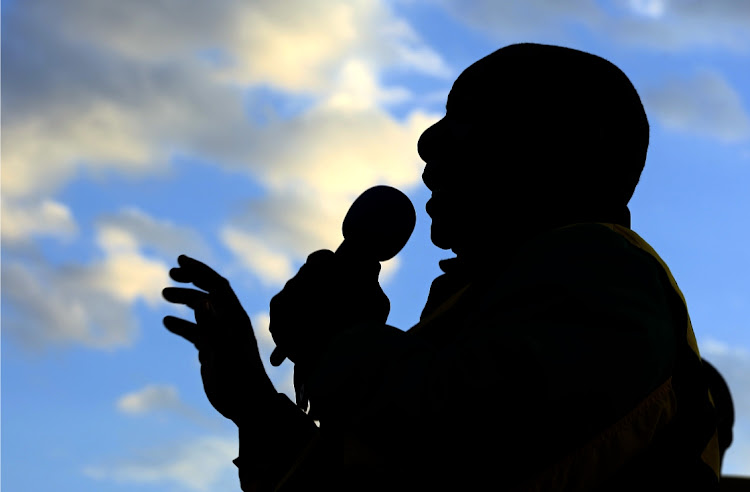 With only a few hours to go before South Africans cast their vote for the local government elections‚ ANC president Cyril Ramaphosa said he is confident that his party will “surprise many”.

Many people thought that the ANC is on its knees and that its elections drive will fail, but it has mounted a “powerful campaign”, said Ramaphosa.

Speaking after addressing a small crowd that had gathered for a community meeting at the Kopanong Sports Ground in Ivory Park‚ Gauteng, Ramaphosa said that the ANC is “fully and completely” ready for the elections.

“Our supporters and members are primed to go out in great numbers to go and support the ANC and vote for the ANC,” he said.

He thanked party members and supporters for driving the campaign.

“Last night I said I could smell the victory and when I see the enthusiasm of our people‚ all over where I have been‚ I am confident that we are going to surprise many.”

Ramaphosa said he is deeply humbled by the support he had received during the nationwide campaign trail‚ which began in September.

“I feel very encouraged that our people have responded this way. It is very humbling to see the level of support‚ despite the challenges and the problems that we have gone through in the last five years‚ particularly at local government level.”

This time round‚ he said, the party is pinning its hopes on the renewal process that it has embarked on‚ hoping that it will encourage citizens to vote for the party.

True to form‚ Ramaphosa promised that, “We are going to change things and our monitoring system is going to be such that we will keep a close eye on what happens at local government level.

“So I go into the elections very confident and pleased. When I cast my vote‚ I will know that there will be many millions that are going to also cast the vote for the ANC.”

Addressing the Ivory Park community members‚ Ramaphosa — flanked by NEC member Zizi Kodwa‚ Gauteng premier David Makhura and newly elected Johannesburg mayor Mpho Moerane — said that he is aware that the community is plagued by many service delivery problems including that regarding old sewerage pipes‚ housing‚ ageing infrastructure and roads as well as electricity.

“When I entered here‚ it was dirty. When I was coming in I saw papers all over the place and there is dirt all around here.”

He told the community that Makhura had agreed that some of the residents could move into a housing development in Clayville in Ekurhuleni Metro. Ramaphsoa said he had also met Moerane‚ who had told him that he had established a plan to solve service delivery issues in Ivory Park.

Showing the community an 18-page plan‚ Ramaphosa said‚ “The mayor said your roads are not tarred, and work to address that has begun… he also spoke about RDP houses and said he will build you houses here.”

He told the community that he is aware that many people are unemployed in the area. “We need our people to start entering into small to medium enterprises. There are a lot of people who are running small businesses.

“Some people tell me that here in Ivory Park a lot of foreign nationals do not have permission to sell… This is a challenge to us as South Africans, that we need to stop waiting for the government to do everything for us.

“We need to take the initiative and do things ourselves. In isiZulu they say‚ ‘uzoyithola kanjani uhleli ekhoneni? (How will you achieve anything if you do not take initiative?).

“Foreign nationals are entrepreneurial and have energy to make things happen for themselves by selling different things‚ making things and show that they are up and running‚ all the time. That is what we want from our fellow South Africans. They must also be entrepreneurial. We must manufacture things.”