Reflecting on the party’s campaigns across the country, Ramaphosa said people had raised their issues with the party leadership clearly, fearlessly and, sometimes, angrily 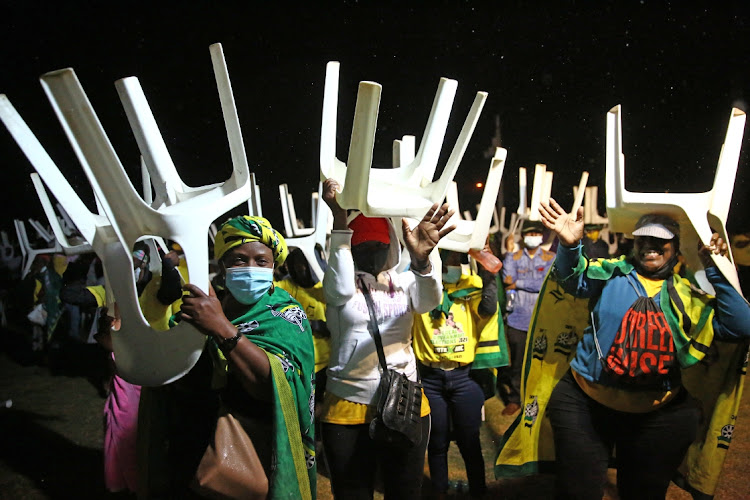 ANC supporters braved the rain at Thokoza Park, Soweto, where the party held its final rally ahead of the local government elections on Friday. Picture: THAPELO MOREBUDI

The ANC’s final push for votes on Friday was met by angry Soweto residents, who barricaded several roads in a bid to highlight their grievances.

Electricity shortages topped the list of their concerns before they head to the polls to cast their votes on Monday.

Hundreds of supporters descended on Thokoza Park where party president Cyril Ramaphosa received a roaring welcome as he appealed to voters to return the ANC to its former glory — a position of governance in all the country's metros.

Before his address, residents used burning tyres, rocks, tree branches and other objects to block roads near the venue. This as the ANC’s campaign has been met with widespread criticism.

Ramaphosa admitted that under his administration “many communities are not getting the services they need and deserve”.

“The provision of water, electricity, waste collection and sanitation is often unreliable, of poor quality and, for many households, unaffordable. These are the most basic needs for a decent life,” he said.

Reflecting on the party’s campaigns across the country, Ramaphosa said people had raised their issues with the party leadership clearly, fearlessly and, sometimes, angrily. Despite this, Ramaphosa said, people believe the ANC is the only party capable of fixing the rot.

The party leadership had noted several grievances and difficulties that the majority of residents in the country continue to experience. “Families confront hunger and poverty every day. Millions of people are unemployed. Many live in informal settlements without basic services. Crime and violence are rife,” he said.

“We have heard about the ANC’s weaknesses and shortcomings. People have been forthright in their criticism of the ANC because they know the ANC listens. And they know that the ANC is in a better position than any other party in this country to improve things. They have told us that the ANC belongs to them, to the people.

“They say that they love the ANC, but that we must correct our mistakes and fix the problems in local government. The people see that the ANC has the will and the ability to make a change,” he said.

Ramaphosa said the party’s renewal project was evident in the way the ANC has chosen its local government candidates — which involved ordinary community members to ensure that communities ran effectively.

“We want competent mayors who will demonstrate that they can perform and who will put the interests of our people first.”

Ramaphosa also used the rally to remind residents of the good the party has done in previous years.

“We have heard about houses that have been built, about impoverished communities that now have electricity and running water, about roads that were once dusty paths that have now been tarred, about new clinics and improved schools, about street lights and sports grounds.

“We have heard about the social grants that have lifted millions out of dire poverty, about the life-changing opportunities of no-fee schools and fee-free higher education, and about the measures government has taken to shield the most vulnerable in our society from Covid-19 effects,” he said.

PRAVIN GORDHAN: Election must be a watershed moment when a different political culture emerges

We should not allow despondency in the face of wrongs committed in the name of democracy to triumph, writes Pravin Gordhan
Opinion
6 months ago