Riots have cost retailers R5bn, while logistics companies have lost R300m in the carnage 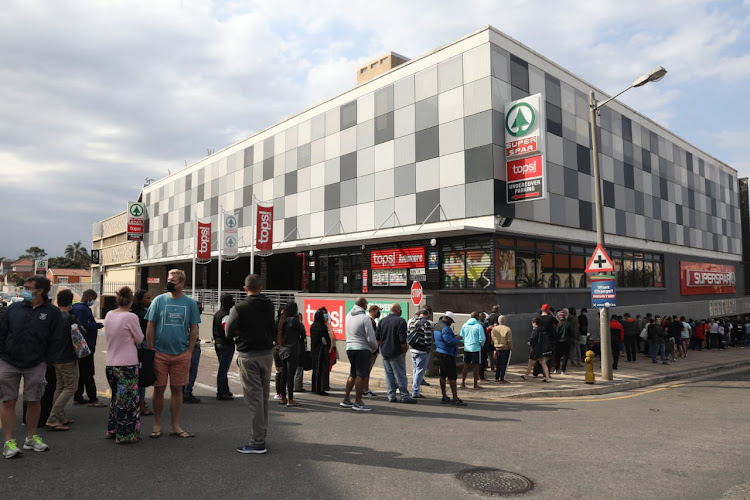 People queue outside Superspar on Avondale Road in Morningside to buy their groceries as the food shelves are going dry following the looting of shops in KwaZulu-Natal and Gauteng. Picture: SANDILE NDLOVU

Footage of empty or sparse grocery-store shelves has been a staple of local news reports since the weekend, while stores such as Shoprite and Pick n Pay closed many outlets altogether. In parts of Durban, which has been at the centre of the upheaval, long queues formed outside the few open food shops, and basics such as bread and milk were in short supply.

“Food is going to be a problem because shops haven’t been open for three days and many with bulk storage have been looted,” said Gavin Hudson, the CEO of sugar producer Tongaat Hulett, which has suspended milling and refining operations outside the city. “We are going to face some food issues in KwaZulu-Natal very shortly.”

The unrest started with protests against the arrest of former President Jacob Zuma, but soon degenerated into deadly and destructive rampages in KwaZulu-Natal and Gauteng. Rioters brazenly stole food, electronic goods and medical supplies from at least 800 stores, and retailers have lost an estimated R5bn to date, according to the Consumer Goods Council of SA.

The Beer Association of SA called for a state of emergency after two SAB depots in KwaZulu-Natal were looted and set alight and Heineken’s warehouse was ransacked.

“There is a fear that the other three remaining SAB facilities in the province will also be targeted,” Nicole Mirkin, a spokesperson for the Beer Association, said in a statement.

More than 600 retail and liquor stores have been damaged and in some cases destroyed, according to reports received by the association.

More than 35 trucks have been destroyed, costing logistics firms of at least R300m and counting, the Road Freight Association estimates. That’s led to the closing of the N3 between Durban and Johannesburg, cutting off the flow of food and other essential goods.

Citrus farmers are in mid-export season and are among those unable to harvest and transport their produce, Christo van der Rheede, executive director of Agri SA, said in an interview. Sugar cane fields have been razed and livestock stolen, and commitments on exports and support jobs may not be met, he said.

“South Africans are very fortunate to receive fresh fruit, fresh meat, fresh vegetables on a daily basis,” he said. “If these supply chains are disrupted, there won’t be fresh produce in stores and people will have to rely on frozen supplies. But what do we do if we run out of that as well?”

SA’s food inflation hit 6.8% in May, the fastest pace in almost five years.

While the crisis may have its roots in support for Zuma, the scale of the outbreak has also been linked to years of poor government services and a record unemployment rate of 32.6%.

President Cyril Ramaphosa on Monday described the violence as “opportunistic acts of criminality, with groups of people instigating chaos merely as a cover for looting and theft.”

A small blessing is that the riots are confined to KwaZulu-Natal and Gauteng, but the problem will escalate if the violence spreads, said Van der Rheede. If that happens, the country’s entire food logistics network would be jeopardised.

“The last thing that we want is for South Africans to experience hunger, food shortages and starvation,” he said.

Correction: July 14 2021
The subheadline has been corrected to reflect that riots have cost retailers R5bn.

Corruption thrives in a destabilised state with weak institutions. SA cannot be allowed back to that space because there will be no turning back
Opinion
2 weeks ago

Afrox confirms its operations in Durban are secure

‘Leaders’ took a hard blow to their legitimacy as looting raged. Meanwhile, contempt for the rule of law flourishes
Opinion
2 weeks ago
Next Article