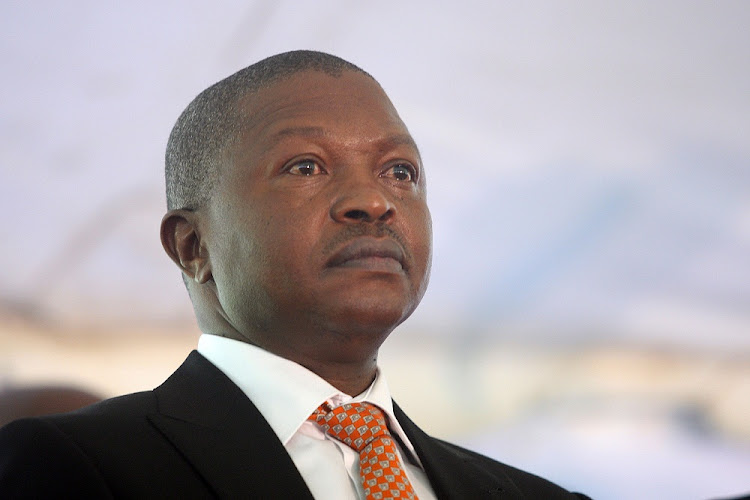 Deputy President David Mabuza has refused to be drawn into the spat between public enterprises minister Pravin Gordhan and under fire public protector Busisiwe Mkhwebane on Thursday, over the so-called SA Revenue Service (Sars) “rogue unit”.

The EFF has been calling for Gordhan to be removed from his position following a controversial report by Mkhwebane, which found that the minister had violated the constitution by establishing the Sars “rogue unit”. Mkhwebane directed President Cyril Ramaphosa to take disciplinary action against Gordhan within 30 days.

Gordhan has approached the courts to challenge the report, and another earlier one on his approval of former Sars commissioner Ivan Pillay’s early retirement package. Ramaphosa has backed his minister in the court bids.

WATCH: Can the beleaguered Busisiwe Mkhwebane keep her job?

Last week in Parliament, Ramaphosa — who is seen to be in the same ANC faction as Gordhan, striving to clean up government and state-owned entities — came out in strong support of the minister, describing him as a person of commitment and integrity.

Ramaphosa avoided commenting on the merits of the court case, but said: “I can express a view on the character of the minister and the contribution he has made to the liberation of our country. I have appointed him to a critical and demanding position in cabinet because I know him to be a person of commitment and integrity.”

Responding to questions from the EFF during a question and answer session in parliament on Thursday, Mabuza brought up the sub-judice rule, arguing that the Sars “rogue unit” matter was still to be decided by the courts and therefore it would be premature to comment.

In a follow-up question, EFF MP Mbuyiseni Ndlozi asked Mabuza whether, taking his response into account, he believed that establishing an intelligence unit in Sars would be illegal, “meaning it would be a rogue unit and as a result it would mean that your government has to take action against the individuals involved, disband it, and make sure it doesn’t happen again”.

Mabuza refused to comment further, saying the matter was before the courts. The EFF and the DA challenged this assertion stating that parliament was within its rights to interrogate the matter and hold the executive to account. National Assembly speaker Thandi Modise eventually ruled that the supplementary question should be set aside until she received clarity on whether it was in line with the rules of the house.

Speculation is that Mabuza is sympathetic to a faction linked to former president Jacob Zuma, which is seeking to regain lost ground. Mkhwebane, whose integrity and competence has been called into question following the release of a number of controversial reports, has been drawn into the ANC infighting.

She released her report on the matter last week,  finding that the president deliberately misled parliament on the donation to his campaign, and ordered that national director of public prosecutions, Shamila Batohi, investigate "prima facie evidence" of money-laundering linked to Ramaphosa’s campaign.

Ramaphosa announced on Sunday evening that he would seek an urgent legal review of Mkhwebane’s report.

TONY LEON: How is it that Mkhwebane did not resign, in disgrace, on Monday at the Constitutional Court?

The past week has brought forth so many examples of shamelessness, mendacity and double-dealing and dimmed expectations, even an ardent cynic would ...
Opinion
2 years ago

Ramaphosa’s ANC has not had the courage to support a DA motion to remove Mkhwebane, so she plays factional politics
Opinion
2 years ago

NEWS ANALYSIS: Mr President, SA does not want ‘everyone in the kraal’

As long as the political and legal turmoil continues, Cyril Ramaphosa appears vulnerable and his agenda will flounder
National
2 years ago

Busisiwe Mkhwebane has to fork out almost R1m

Mkhwebane ups the ante in legal fight with Ramaphosa

Mkhwebane ups the ante in legal fight with Ramaphosa