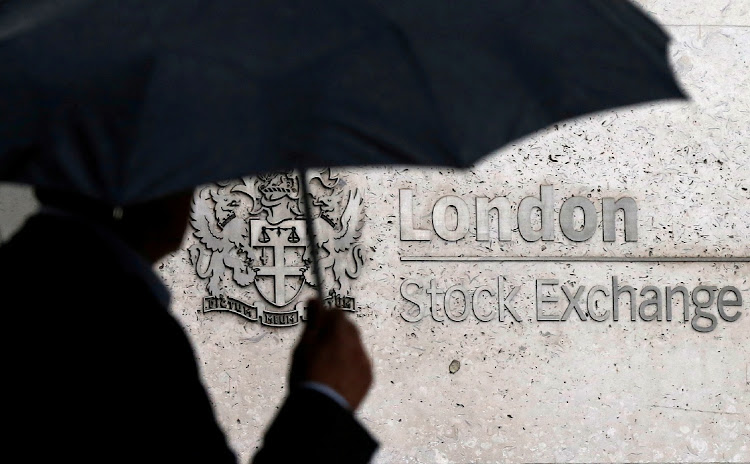 A man shelters under an umbrella as he walks past the London Stock Exchange in London. Picture: REUTERS/SUZANNE PLUNKETT

London — World stocks held their ground on Monday after eight consecutive sessions of gains, as traders weighed the prospects of strong corporate earnings on the backdrop of widening inflation risks from multiyear high crude oil prices.

European stocks edged higher in early London trading while US stock futures held firm as investors shrugged off the possible impact from news of a pilot property tax in China and ongoing troubles in the sector.

While the broader economic momentum has slowed in recent weeks and market-implied inflation risks have increased with break-even rates on both sides of the Atlantic racing to multiyear highs, equity markets have been broadly unfazed.

MSCI’s broadest index of world stocks steadied below an early September high after notching up eight consecutive sessions of gains, its longest winning streak since late May, according to Refinitiv data.

European stocks steadied while US stock futures tiptoed higher as a busy week for third-quarter corporate earnings gets under way.

“Equity markets have had a kitchen sink of worries thrown at them — slower growth, rising costs, and higher interest rates. However, corporate earnings have more than offset those declines so far in 2021,” said Marija Veitmane, a senior strategist at State Street Global Markets.

“Peak growth clearly is not peak earnings as we have been highlighting.”

Of the 117 S&P 500 companies that have reported earnings so far, 65% have exceeded consensus expectations by at least a standard deviation of analyst estimates, a rate if sustained would rank the September quarter among the strongest on record behind an already strong first half, according to Goldman Sachs.

In Europe, the number of companies that have beaten expectations in the third quarter is now past 60%, according to Refinitiv I/B/E/S data.

On Monday, Facebook will kick off earnings for tech giants, with other heavyweights including Microsoft, Apple and Alphabet, and European and Asian financial behemoths from Deutsche Bank to Lloyds reporting later in the week.

Strong corporate earnings have also stalled the US dollar’s recent advance even as money markets have boosted their expectations of policy tightening.

The dollar index held near a one-month low of 93.483, down 0.16% on the day as hedge funds cut their dollar long positions for a second consecutive week.

The risk-friendlier mood has weighed on safe-haven currencies such as the yen, as have rising energy prices, which supported currencies including the Aussie and Canadian dollars.

Traders are waiting for the third-quarter US GDP figures due on Thursday, with flash euro area CPI readings for October also a key indicator after the gauge jumped to a 2008 high last month.

Federal Reserve chair Jerome Powell on Friday said the US central bank should start the process of reducing its support of the economy by cutting back on its asset purchases, but should not yet touch interest rates.

As tapering looms, US benchmark yields have been rising and yields on 10-year Treasury notes held below a five-month high of 1.7064% hit last week.

Oil prices rose further, with US crude hitting a seven-year high as global supply remained tight amid strong demand worldwide. Brent crude rose 0.83% to $86.24 a barrel, while US crude rose 0.80% to $84.51.

Spot gold rose 0.36% to $1,798 an ounce after posting gains for the past two weeks on rising inflation concerns, and the weakening dollar.

All share index climbs the most in two weeks, buoyed by the Chinese property giant making a last-minute coupon payment and solid company earnings ...
Markets
1 month ago

JSE all share gains 0.8% midmorning as Evergrande debt repayment ‘to provide some relief to China equities’
Markets
1 month ago
Next Article