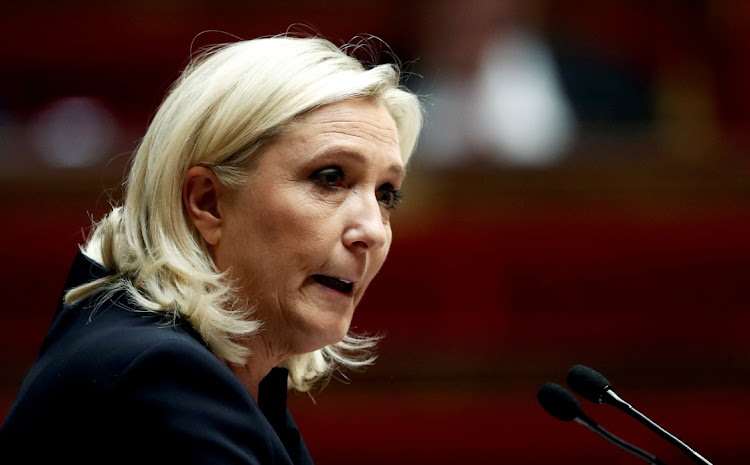 Marine Le Pen, member of parliament and leader of French far-right National Rally party, delivers a speech during a debate on immigration at the National Assembly in Paris on October 7,2019. Picture: REUTERS/BENOIT TESSIER

Paris — Far-right leader Marine Le Pen said France was at risk of a civil war, as she prepared to tackle President Emmanuel Macron in 2022’s election.

After a group of retired generals hinted in April at the threat of a military uprising, another open letter to the president — this time unsigned but attributed to serving officers — stoked further controversy on Sunday with a warning of “chaos and violence.”

Le Pen, who could run Macron close in the presidential ballot according to the latest polls, said that she isn’t calling for insurrection and urged those who supported the latest letter to join her movement. Officials from Macron’s administration dismissed her comments as political manoeuvring. Other French presidents have occasionally faced similar warnings from army officers over the years but the threats have never materialised.

With less than a year to go before the first round of presidential voting and regional elections due next month, Le Pen is seeking to capitalise on concerns about security that Macron has failed to quell despite a high-profile campaign to push back against Islamists responsible for a spate of violent attacks.

The challenge for the nationalist in her third presidential campaign is to soften her profile enough to pick up more moderate voters while keeping her core electorate on her side.

She tried to frame the first letter as referring mainly to the situation in the housing projects on the outskirts of many French cities, which are typically racially diverse and economically deprived. She also argued that the government itself has expressed concern over insecurity and pointed out that one former Macron minister had talked about the risk of a widening gap between the projects and the rest of the country.

The latest letter states that “the hatred of France and its history are becoming the norm” — an apparent reference to Macron’s efforts to acknowledge the abuses of France’s colonial past — and used coded language to criticise Muslim communities that don’t integrate with the rest of society.

The Republicans, the traditional right-wing party in France that has been squeezed between Macron and Le Pen, described it as a legitimate alarm bell.

“If a civil war breaks out, the army will maintain order on its own soil, because it will be asked to do that,” the letter said, addressing Macron. It says its authors have served in Africa and Afghanistan “fighting Islamism, to which you are making concessions on our soil”.

By Monday evening, about 200,000 people had signed the letter, according to the right-wing weekly Valeurs Actuelles.

France and Britain face off over fishing rights in Jersey waters

France and Britain face off over fishing rights in Jersey waters