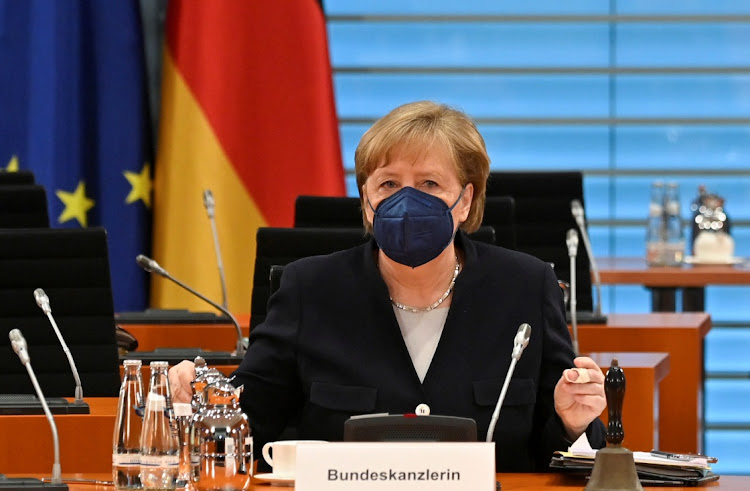 Berlin — German Chancellor Angela Merkel weighed in against a proposal to waive patent protections for Covid-19 vaccines, backed by the US, casting doubt on whether the idea has enough international support to become a reality.

The plan would create “severe complications” for the production of vaccines, a German government spokesperson said Thursday in an e-mail. Without the incentive of profits from research & development spending, drugmakers might not move as aggressively to make vaccines in the future, the industry has argued.

The US government said it on Wednesday it would support a temporary waiver on intellectual property rights for Covid-19 vaccines. SA and India have led a group of  countries that have  been urging the suspension of the Word Trade Organization’s  (WTO) Trade-Related Aspects of Intellectual Property (Trips) on Covid-19 vaccines.

New Zealand and France have backed the plan, and European Commission chief Ursula von der Leyen said on Thursday the bloc was willing to discuss it.

Pharmaceutical stocks that had sunk on the news of the US proposal rebounded on Merkel’s stance. Moderna was down 2.1% after falling as low as 12% earlier. CureVac fell 5.4%, an improvement from its earlier 13% decline, while BioNTech was down 3.5% after earlier dropping 15%.

The US, Germany and other countries will take up debate over the idea in the coming weeks via the WTO, pitting the idea of sharing proprietary know-how against the need to boost global supplies, especially in developing countries that have struggled to get their populations inoculated.

Merkel’s position shows she is sympathetic to the argument of drugmakers such as Mainz, Germany-based BioNTech, whose vaccine with Pfizer uses cutting-edge messenger RNA technology.

“The limiting factor for the production of vaccines are manufacturing capacities and high quality standards, not the patents,” the German government spokesperson said. “The protection of intellectual property is a source of innovation and this has to remain so in the future.”

Officials and diplomats in Brussels cautioned that such discussions will take months and will probably result in partial waivers only, as there’s little chance the EU and the US will agree to cede intellectual property for the revolution of its mRNA technology with China.

In any case, most poor countries in the world have neither the capacity nor the expertise to produce such advanced treatments. A more immediate solution to the problem, the officials said, would be for the US, the UK and others to follow the EU’s lead and lift their effective restrictions on vaccine exports to those who need it.

The US and Europe have been strong supporters of IP protections at the WTO, particularly as a way to enforce problems such as  Chinese patent infringement. As the pandemic leads to some of the world’s more monumental and lucrative scientific discoveries, defenders of IP rights are warming to some exceptions on ethical grounds even though the drug companies argue it’ll do more harm than good.

As the US inoculations advanced and outbreaks diminished in recent weeks, the White House came under pressure from progressive Democrats and public-health advocates to take a stance while India in particular suffers from surging deaths and infections.

“In terms of how soon the WTO can deliver — that literally depends on the WTO members, collectively, being able to deliver,” US trade representative Katherine Tai said in an interview on Wednesday. “I am the first one to admit that what we are leaning into is a process that is not going to be easy.”

WTO director-general Ngozi Okonjo-Iweala welcomed the US decision to support the waiver and wants countries to come to a decision by the time of the organisation’s ministerial meetings in December, spokesperson Keith Rockwell said.

Many WTO members see the issue as important, and the US and EU have “taken note” of US support, Rockwell said in an online press briefing on Thursday after the second day of a general council meeting in Geneva. With Staff Writer

Ten WTO meetings in seven months have failed to produce a breakthrough, with 60 proposal sponsors from emerging economies
World
4 months ago

Despite this, some 90 developing nations, led by India and SA, have called for a waiver to suspend all intellectual property rights associated with ...
Opinion
6 months ago
Next Article