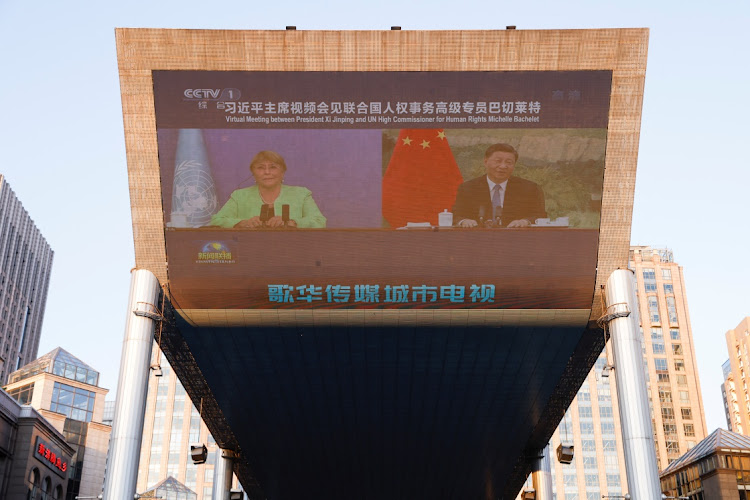 Beijing — Chinese President Xi Jinping spoke on Wednesday via video link with UN high commissioner for human rights Michelle Bachelet, who is on a visit that has drawn criticism from rights groups and which the US has called a mistake.

While Bachelet’s six-day trip will include a visit to the far western region of Xinjiang, where her office said in 2021 it believed mostly Muslim ethnic Uyghur people had been unlawfully detained, mistreated and forced to work, there was no mention of it in a state media account of their talk.

“Deviating from reality and copying wholesale the institutional model of other countries will not only fit badly with the local conditions, but also bring disastrous consequences,” the Xinhua state news agency quoted Xi as saying.

“In the end, it is the broad masses of the people who will suffer,” he said.

Bachelet said her meetings with Xi and other officials had been a valuable opportunity to speak directly about human rights issues.

“For development, peace and security to be sustainable: human rights, justice, inclusion of all, without exception, must be at the core,” she said on Twitter.

Critics have said they doubted Bachelet would be granted necessary access to make a full assessment of the rights situation in Xinjiang. They also said her trip risks becoming a propaganda tool for Beijing.

Bachelet has called for unfettered access in Xinjiang, but China’s foreign ministry has said her visit would be conducted in a “closed loop”, referring to a way of isolating people within a “bubble” to prevent the spread of Covid-19.

On Tuesday, German economy minister Robert Habeck said his country was changing the way it deals with China and would give higher priority to human rights issues, after new media reports about rights violations in Xinjiang.

Several global news outlets reported this week on thousands of leaked photos and documents from public security bureaus in two Xinjiang counties detailing mass detention of Uighurs between January and July of 2018. Reuters could not independently verify the documents.

Responding to a question about Habeck’s remarks, foreign ministry spokesperson Wang Wenbin said China opposed the use of “false information, or even lies” to smear it and noted that economic co-operation between the countries was mutually beneficial.

“I hope that the German government and politicians will look at it correctly and will not mislead the public to the detriment of their own interests,” Wang said.

Bachelet’s long-anticipated visit to China, the first by a holder of her office in 17 years, has been fraught since its inception, largely over concern among rights groups and Western governments that it could lead to endorsement rather than scrutiny of China’s rights record.

On Tuesday, US state department spokesperson Ned Price said it was “a mistake to agree to a visit under the circumstances”.

The US has described China’s treatment of Uighurs as genocide.

On Monday, Bachelet told Beijing-based diplomats that her Xinjiang trip was “not an investigation” into China’s rights record  but about longer-term engagement with Chinese authorities, three Western diplomats said.

Some diplomats voiced concern that she would not be given “unhindered and meaningful” access.

“I’m a grown woman,” she responded to those concerns, two diplomats briefed on the call said. “I’m able to read between the lines.”

Bachelet explained that though her access was limited because of Covid-19, she had set up some meetings with people independently of Chinese authorities. Her office did not immediately respond to an emailed request for comment.

China initially denied the existence of any detention camps in Xinjiang but in 2018 said it had set up “vocational training centres” necessary to curb what it said was terrorism, separatism and religious radicalism in Xinjiang.

In 2019, Xinjiang governor Shohrat Zakir said all trainees had “graduated”.

Pressure by China denies Taiwan chance to join WHO assembly