Pressure by China denies Taiwan chance to join WHO assembly 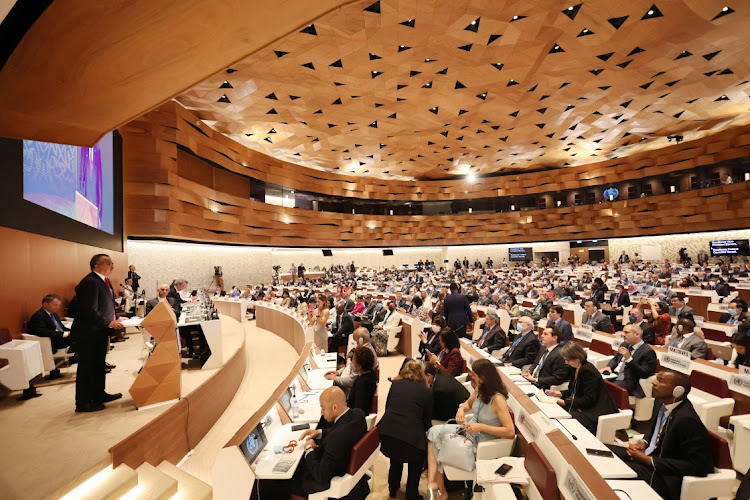 Director-general of the World Health Organization Tedros Adhanom Ghebreyesus addresses the 75th World Health Assembly at the UN in Geneva, Switzerland, on May 22 2022. Picture: REUTERS/DENIS BALIBOUSE

Geneva — Taiwan’s bid to attend the World Health Organisation’s (WHO’s) annual assembly was rejected on Monday, the assembly said, after a campaign of diplomatic pressure from China to isolate the island, which it considers to be one of its own provinces.

World Health Assembly (WHA) president Ahmed Robleh Abdilleh, also Djibouti’s health minister, said in a statement that a proposal sent by 13 WHO members to allow Taiwan to join as an observer would not be included in its official agenda.

“China’s repeated use of politics to override the public interest of global health security and harm the health and human rights of the Taiwanese people, is unacceptable to the ministry of foreign affairs,” it said in a statement.

Taiwan is excluded from most global groups due to Beijing’s objections. China insists that Taiwan should not be treated as an independent country as it considers the island a province.

Taipei argues that its exclusion from the WHO has hampered efforts to fight the Covid-19 pandemic. It is allowed to attend some technical WHO meetings.

On Tuesday, Taiwan said it disputed China’s claim that it had made proper arrangements for Taiwanese participation in global health affairs.

Assembly president Abdilleh said the decision to reject Taiwan’s inclusion followed a recommendation from the General Committee, which discussed the proposal on Sunday in a closed-door meeting.

“The political and legal foundation for Taiwan’s participation in the WHA ceases to exist,” Chen Xu, Chinese ambassador to the UN in Geneva, told the assembly shortly before the decision. “This political manipulation will only be met with opposition from all parties.”

However, both the US and Britain showed their support for Taiwan’s inclusion.

US envoy to the assembly Loyce Pace said that Taiwan had been a critical partner contributing constructively to global health and that the US “deeply regrets” its exclusion from attending the assembly as an observer.

“There’s clearly no health crisis to justify not including Taiwan as an observer of the WHO,” British health minister Sajid Javid told the assembly.

2022’s assembly, joined by thousands of delegates including nearly 100 from China, will discuss key reforms such as changes to the WHO's funding.

China began blocking Taiwan’s WHA participation from 2017, marking the end of a warmer period of relations between Beijing and Taipei.

More than 100 cases of the virus, which spreads through close contact and is usually mild, have recently been reported outside countries in which it ...
World
1 month ago

The guest list is hundreds of names shorter, with many titans of finance conspicuously absent
News
1 month ago
Next Article