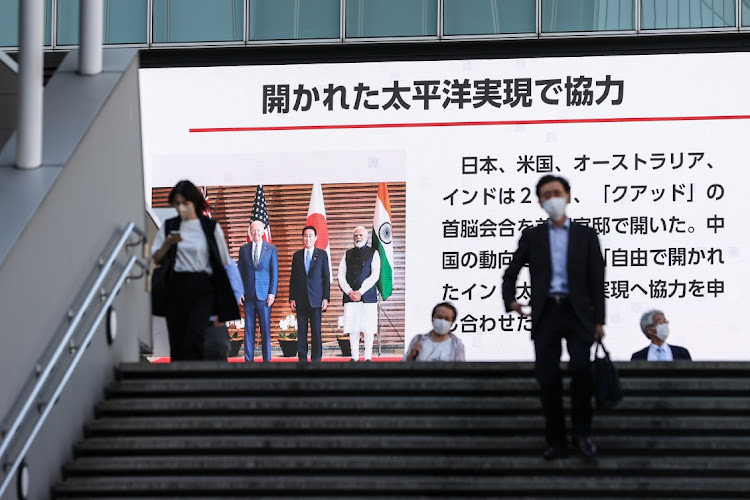 Russian and Chinese nuclear bombers conducted joint exercises to patrol the Asia-Pacific region on Tuesday in a pointed farewell to US President Joe Biden as he concluded an Asia trip that rankled Beijing.

Japan scrambled jets after Russian and Chinese bombers neared its airspace while Tokyo was hosting the leaders of the Quad group of countries, which includes the US, said defence minister Nobuo Kishi, who called the move a provocation.

It was the first joint military exercise by China and Russia since Moscow invaded Ukraine on February 24, according to a US official, and it came at the tail end of Biden’s four-day trip.

“We think it shows that China continues to be willing to closely align themselves with Russia, including through military co-operation,” a senior administration official said, adding that such actions must be planned well in advance.

“China is not walking away from Russia. Instead, the exercise shows that China is ready to help Russia defend its east while Russia fights in its west,” the official said.

Biden stressed during the trip, intended in part to counter China’s growing influence in the region, that the US will stand with its allies and partners to push for a free and open Indo-Pacific region.

Beijing and Moscow declared a “no-limits” partnership just weeks before Russian President Vladimir Putin ordered the invasion of Ukraine, and China has refused to condemn the move.

Planes from the Japanese and South Korean air forces shadowed the Russian and Chinese jets for part of the exercise, it said.

Tokyo conveyed “grave concerns” to both Russia and China through diplomatic channels, Kishi said at a news conference.

He characterised the incident as a likely provocation by both Beijing and Moscow on a day when Biden, Indian Prime Minister Narendra Modi and Australia’s newly elected leader, Anthony Albanese, were meeting in Tokyo.

“We believe the fact that this action was taken during the Quad summit makes it more provocative than in the past,” he said, adding it was the fourth such incident since November.

Chinese naval vessels probably participated in the joint exercise, a US official said.

China’s defence ministry confirmed the joint aerial patrol over the Sea of Japan, East China Sea and the Western Pacific and called it part of an annual military exercise.

On Monday, Biden angered China by saying he would be willing to use force to defend Taiwan, but he said later US policy towards the self-ruled democratic island had not changed. China considers Taiwan an inalienable part of its territory that should be reunited with the mainland.

Tuesday’s drill was the first reported since new South Korean President Yoon Suk-yeol took office on May 10. On Sunday, Yoon wrapped up his summit with Biden, where the two leaders pledged support for measures seen as countering China’s influence in the region, and criticised Russia’s war in Ukraine.

The Russian and Chinese aircraft entered and left the Korea Air Defence Identification Zone in the Sea of Japan, known in Korea as the East Sea, several times through the day, according to South Korea’s Joint Chiefs of Staff.

The aircraft, which included fighter jets and bombers from each side, did not violate South Korea’s airspace, it said.

South Korea had no warning of the apparent drills, a military source in Seoul said. When Seoul saw that the aircraft appeared to be headed towards the defence zone, it used hotlines to warn Chinese and Russian counterparts, the source said.

China responded that it was a regular exercise, the source added, while there was no response from Russia.

Unlike airspace, an air defence identification zone, or ADIZ, is usually an area where countries may unilaterally demand that foreign aircraft take special steps to identify themselves, with no international laws governing ADIZs.

Alliance has long been the cornerstone of peace in the Indo-Pacific, American president says
World
1 month ago
Next Article