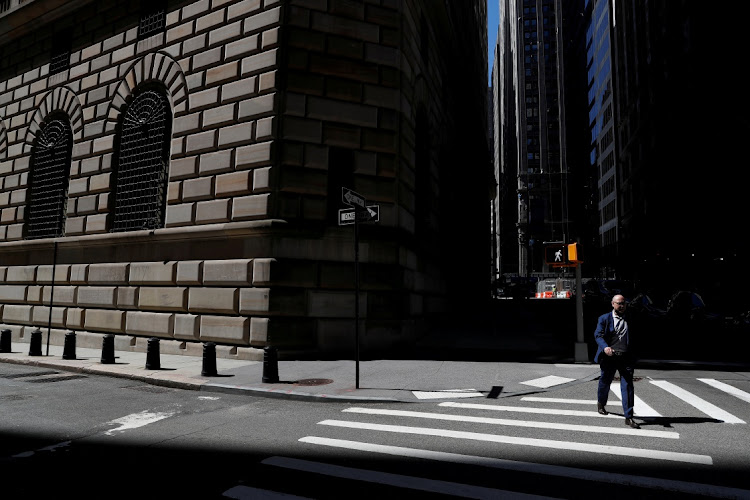 A man walks by the Federal Reserve Bank of New York building in New York, the US, April 26 2021. Picture: REUTERS/SHANNON STAPLETON

Washington — Federal Reserve chair Jerome Powell has ordered a sweeping review of the ethics rules governing financial holdings and dealings by senior officials at the US central bank, a Fed spokesperson said on Thursday.

Powell ordered the review late last week, the spokesperson said in an emailed statement, following recent reports that two of the Fed system’s 12 regional Bank presidents had been active investors during 2020, a notably volatile year for asset prices as the country battled the Covid-19 pandemic.

Those revelations, originally reported by the Wall Street Journal, prompted senior US legislators — including senator Elizabeth Warren of Massachusetts — to demand more stringent restrictions on such activities.

“Because the trust of the American people is essential for the Federal Reserve to effectively carry out our important mission, chair Powell late last week directed board staff to take a fresh and comprehensive look at the ethics rules around permissible financial holdings and activities by senior Fed officials,” the statement said.

The rules that guide personal financial practices for Fed officials are the same as those for other government agencies, the spokesperson said. Moreover, the Fed has supplemental rules that are stricter than those for Congress and other agencies that are specific to its work.

“This review will assist in identifying ways to further tighten those rules and standards. The board will make changes, as appropriate, and any changes will be added to the Reserve Bank code of conduct,” the statement said.

Warren, in a Tweet, called the review “long overdue” but encouraged the Fed's regional bank presidents to impose strict rules on their own.

Following news reports on their trading last week, Dallas Fed president Robert Kaplan and Boston Fed president Eric Rosengren both said they would divest any holdings of individual stocks by September 30 and put the proceeds into index funds or cash.

Their investments were judged by in-house ethics officers to have complied with Fed ethics rules. Kaplan, a former vice-chair of Goldman Sachs, has been an active trader since taking over the Dallas Fed in 2015, with multiple, million-dollar transactions in individual stocks each year, according to financial disclosures dating to 2016.

Still, their activity drew a sharp reaction given the context of a pandemic year in which tens of millions faced joblessness and the economy was on the precipice of a threatened depression.

The Fed, beginning in March of 2020, rolled out a response that was record-breaking for its speed and scope, with interest rates slashed to zero and open-ended promises to use bond buying and other tools to keep the economy afloat.

The effort stabilised financial markets, underwrote credit to small businesses and helped set the stage for a fast rebound of jobs and economic growth.

It also triggered a record surge of asset prices following a crash early in the pandemic. Between the Fed's efforts and trillions of dollars in government spending approved by Congress, the S&P 500 Index has more than doubled from its pandemic low on March 23, 2020 and is about 30% above the high hit in the previous month.

It is not unusual for Fed officials to hold extensive portfolios. Powell, a private equity lawyer with a stint at the Washington-based Carlyle Group, has net worth in excess of $17m and perhaps much higher, according to his latest ethics filings.

But they are not as a rule active traders, and many join the Fed from academic backgrounds or government posts. St Louis Fed president James Bullard's holdings are modest enough that he hand writes his ethics form. Former Fed chair Janet Yellen's disclosure was notable largely for its stamp collection.

Fed rules explicitly prohibit trading around the time of Fed policy meetings — when market-sensitive information is distributed — requires securities to be held for at least 30 days and forbids officials from holding bank stocks or funds with holdings concentrated in the financial sector that the Fed oversees.

But broader language in the Fed's internal rules requires officials to avoid even the appearance of conflict or of using their position for personal gain.

For Powell, promoted to Fed chair in 2018 by former president Donald Trump and subsequently a target of Trump’s ire for his management of Fed interest rate policy, the revelations come at a particularly awkward time.

His current term as chair ends in February, and President Joe Biden is in the midst of deciding whether to appoint him to a second four-year term.

Among those advocating for a change in Fed leadership, one of the chief arguments has been that Powell, a private equity lawyer, has not been strict enough in his approach to Wall Street.

He has also worked to build strong relationships among US lawmakers and has preached the need for the unelected central bankers to be transparent in their actions and accept oversight by the country's elected officials.

Adjusted value of locally produced goods and services climbs to an annualised $19.36-trillion, eclipsing its pre-pandemic peak
World
2 months ago