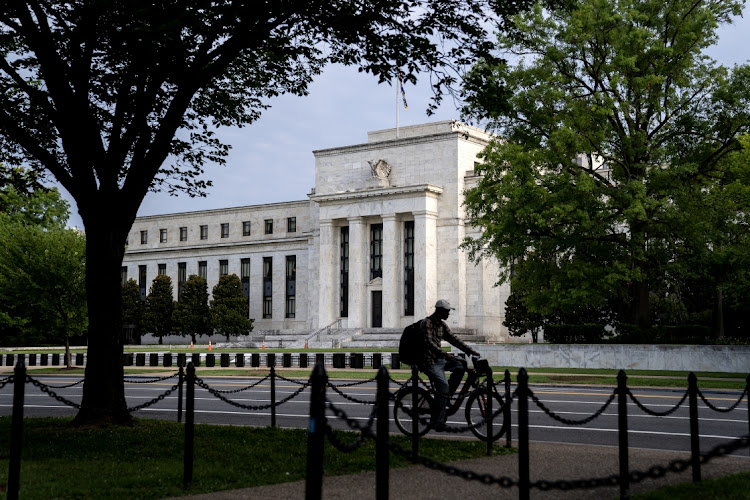 The Federal Reserve building in Washington, DC, the US, July 23 2021. Picture: STEFANI REYNOLDS/BLOOMBERG

Policy hawks at the Federal Reserve are setting their sights on scaling back the US central bank’s massive intervention in the mortgage market as home prices soar. But the Fed leadership doesn’t sound convinced by arguments in favour of a hasty exit strategy.

The debate over whether to taper the Fed’s purchases of mortgage-backed securities (MBS) faster than its buying of treasury debt will probably be near the top of the agenda when officials gather on July 27 and 28 to discuss next steps for policy.

Economists surveyed by Bloomberg expect them to leave their support in place and be silent on taper timing in their statement, which will be released at 2pm Washington time on Wednesday.

Pressure on Fed chair Jerome Powell to begin scaling back bond buying sooner rather than later has probably eased amid concern that spread of the coronavirus Delta variant could sap the economic recovery.

The central bank is holding interest rates near zero and is buying $80bn of treasuries and $40bn of MBS each month as part of the crisis-era bond buying programmes it relaunched last year at the onset of the pandemic. Economists expect it to begin scaling back purchases later this year or early in 2022.

First, Fed officials must decide on when and how to begin doing so. A key question is whether to taper purchases of treasuries and MBS at similar rates or, alternatively, prioritise reductions in purchases of MBS given the state of the housing market.

“The agenda for this next meeting is probably to start hashing out some of the logistics,” said Aneta Markowska, chief financial economist at Jefferies in New York. “On timing, it’s still too early to make decisions, but I think the focus is going to be on those operational details.”

Unprecedented cash payments by the US government to households, record low mortgage rates and changing consumer preferences have conspired to fuel a boom in housing. The S&P CoreLogic Case-Shiller US national home price index rose 14.6% in the 12 months to April, according to the latest available numbers, marking the fastest pace of increase on record in data from 1988.

In one, “several participants saw benefits to reducing the pace of these purchases more quickly or earlier than treasury purchases in light of valuation pressures in housing markets”, according to the record of the committee’s last policy meeting in mid-June.

“Several other participants, however, commented that reducing the pace of treasury and MBS purchases commensurately was preferable because this approach would be well aligned with the committee’s previous communications or because purchases of treasury securities and MBS both provide accommodation through their influence on broader financial conditions,” the meeting minutes said.

Fed watchers are about evenly split on which path policymakers will choose, with slightly more than half expecting them to taper MBS purchases faster, according to results of a Bloomberg survey conducted between July 16 and July 21.

Fed governor Christopher Waller and the presidents of the Boston, St Louis, Kansas City and Dallas Fed banks — Eric Rosengren, James Bullard, Esther George and Robert Kaplan — have all suggested in recent public remarks that such a course of action may be appropriate.

“Right now the housing market is on fire. They don’t need any other unnecessary support so I would be all in favour of that,” Waller said in a June 29 Bloomberg TV interview of the proposal.

The thinking among Fed officials who favour a proportional tapering of treasuries and MBS purchases goes like this, according to Markowska: the two securities are the most important assets in the US financial system, and removing both of them from public portfolios through central bank buying forces investors into other assets and drives down risk premiums across markets. That, in turn, reduces rates paid by mortgage borrowers.

Evans lent support to that interpretation of the effects of the Fed’s MBS purchases as well, while speaking with reporters on July 15. The buying “has much larger effects throughout markets and the way markets are functioning”, he said, pointing to “fungibility with different types of liquidity and assets”.

But even if the hawks do get their way, it probably won’t have a big impact on house prices, Markowska said. With inventories so tight and builders facing temporary constraints on new construction related to availability of labour and materials, demand has already cooled from earlier in the year.

“The only way to relieve the pressure is for home builders to just create more supply,” she said. “That’s really not something that the Fed can do a whole lot about.”