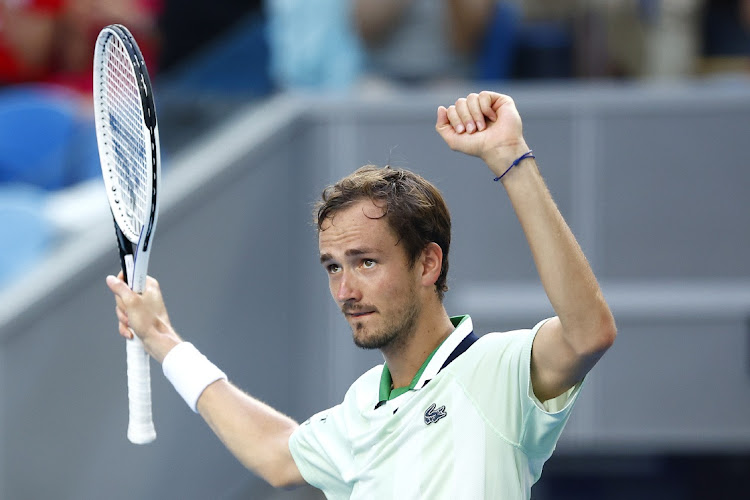 Daniil Medvedev of Russia celebrates after winning match point during his fourth round singles match against Maxime Cressy of the US at the 2022 Australian Open at Melbourne Park in Melbourne, Australia, January 24 2022. Picture: DANIEL POCKETT/GETTY IMAGES

Melbourne — Australian Open favourite Daniil Medvedev labelled the tennis tour’s bathroom break rule as “stupid” after rowing with the chair umpire about freshening up during his sweaty fourth-round win over Maxime Cressy on Monday.

Russian Medvedev barked at French chair umpire Renaud Lichtenstein over the recently updated rule which limits players to a maximum of three minutes off the court, with an additional two if they opt for a change of clothes.

After closing out a tough 6-2 7-6(4) 6-7(4) 7-5 win over American Cressy on a sweltering day at Margaret Court Arena, the second seed said players need more leeway to freshen up on days of extreme heat.

“The thing is  I know that in the 35 [degree] heat, when you’re playing in the sun, I’m going to want to change after two sets because you’re going to get wet,” he told reporters.

“I’m going to want to change my shorts, underneath my shorts, my socks, my shoes. You need like a good four minutes to do it, and my body wanted to pee after the first set.

“So I don’t see any logic in these rules, so hence I can call this stupid.”

After dropping the third set against serve-volleyer Cressy, Medvedev grew ill-tempered in the fourth as he failed to take the American’s serve through eight break points. But he said he was already in a mood about being put on the Margaret Court Arena second showcourt for a second match in a row, rather than the Rod Laver Arena centre court.

“I was quite mad today because of a few things,” said the US Open champion, the highest seed at Melbourne Park after world No 1 Novak Djokovic was deported from Australia.

“First of all is where I really don’t know, like, what should I do to play on centre courts in Grand Slams. Because I won the last Grand Slam. I mean, I'm the highest seed here, and to play against Maxime would be easier on Rod Laver [Arena], more space.

“When you play on a smaller court it’s tougher to play somebody who does serve and volley than on a bigger court.”

Medvedev, runner-up to Djokovic in 2021, will play Canada’s Felix Auger-Aliassime for a place in the semifinals.

Fourth seed Stefanos Tsitsipas survived an attritional fourth-round battle with American Taylor Fritz, twice coming from a set behind to win 4-6 6-4 4-6 6-3 6-4 and reach the quarterfinals.

At just past midnight on Rod Laver Arena the Greek ended Fritz’s resistance to set up a clash with Italian Jannik Sinner when he will be seeking to reach the semifinals here for the third time in his career.

Tsitsipas looked out of sorts and edgy at times but his greater experience on the big stage eventually told as he got the decisive break in the fifth set before claiming victory.

Fritz, playing in his first Grand Slam fourth round, converted only two of his 15 break points and will rue a missed opportunity to become the first American male to reach a Grand Slam quarterfinal for two years.

“It was an epic match that’s all I can say, I gave everything out there on the court today,” the 23-year-old said. “I’m proud of the way I fought.”

Estonia’s Kaia Kanepi rallied from a set down to topple world No 2 Aryna Sabalenka 5-7 6-2 7-6 (10) on Margaret Court Arena to reach the quarterfinals for the first time.

Having surrendered the opening set for three matches in a row, Sabalenka took a one-set lead for the first time in Melbourne but was unable to build on it as her serving issues resurfaced once again.

Kanepi was gifted a double break early in the second set with back-to-back double faults from her 23-year-old opponent and did not waste the opportunity as she cruised to a 4-0 lead before taking the set.

The 36-year-old carried that momentum into the decider and looked set to go 5-3 up but Sabalenka saved four break points to hold for 3-4 and level it, before suffering a service meltdown again and hitting three double faults in four points.

Kanepi was made to work for her victory after being unable to close the match from 40-0 up as Sabalenka saved four match points, but the Estonian prevailed in the tiebreak and converted her fifth match point to complete the upset.

Kanepi will take on Polish seventh seed Iga Swiatek, who beat Sorana Cirstea 5-7 6-3 6-3 earlier on Monday, for a place in the last four.