Teen sensation stays cool under pressure after Stephens fights back, then moves up a gear to dominate the deciding set 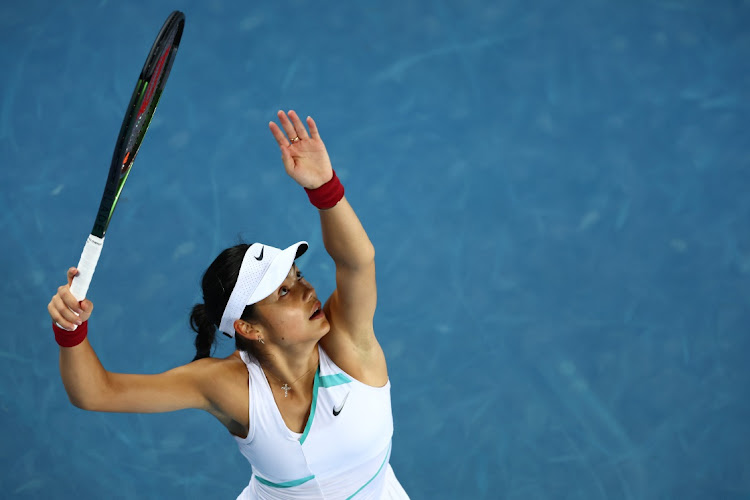 Emma Raducanu of Great Britain serves in her first round singles match against Sloane Stephens of United States during day 2 of the 2022 Australian Open at Melbourne Park on January 18 2022. Picture: GETTY IMAGES/CLIVE BRUNSKILL

Raducanu, who rocketed to fame in September with a fairy-tale run to the US Open title as a qualifier without dropping a set in what was only her fourth senior tournament, raced through the opening set in 17 minutes, leaking only four points.

But former world No 3 and 2017 US Open champion Stephens finally found her rhythm and range to take charge of the second set from 2-2, reeling off four games as errors began creeping in to 17th seed Raducanu’s game.

It looked ominous at that point for the 19-year-old Raducanu whose build-up to her Australian Open debut had hardly been ideal, having had Covid-19 and suffering a heavy defeat in her opening match in Sydney.

But she showed the same coolness under pressure that swept her to the title in New York, settling down and finding another gear to dominate the decider with some precision baseline hitting as Stephens unravelled again.

Stephens avoided another rout as she held serve at 0-5 but there were no more twists as Raducanu closed out the win on serve despite a sixth double-fault on her first match point.

“It was a tough matchup for a first round, her athleticism is right up there, so I’m just happy to get through,” Raducanu, who was under the eye of new coach Torben Beltz, said on court.

“In the first set I played some great tennis with very few errors. Of course there was going to be some adversity and I was happy to regroup in the third set. I don’t think the score reflected the match really as I was really feeling it.”

Nick Kyrgios promised Covid-19-weary fans a show after recovering from his own infection and duly delivered on Tuesday with a 6-4 6-4 6-3 win over Briton Liam Broady.

Kyrgios matches are box-office gold but have dwindled through the pandemic, and there was danger home fans would miss the Australian at Melbourne Park in 2022 after he tested positive in the lead-up. But after exiting isolation on Sunday, the tennis maverick returned to the combustible John Cain Arena and gave raucous fans a night to remember as he set up a blockbuster clash with second seed Daniil Medvedev.

Sealing the win with a furious backhand return down the line, Kyrgios dropped an “F-bomb” in his televised on-court interview and performed Cristiano Ronaldo’s trademark post-goal celebration.

On his way out of the arena, he took a swig of beer from a cup offered by a fan. Covid-19 be damned. “I served ... well today,”  Kyrgios said with an obscenity as fans roared in agreement. “I don’t know what I have done to this crowd as you guys are a zoo now. I am super happy to be here again.”

World number four Stefanos Tsitsipas put on a clinical show against familiar opponent Mikael Ymer of Sweden during a 6-2 6-4 6-3 victory.

Tsitsipas said he considered himself one of the best on hard courts with nine-time Australian Open winner and world No 1 Novak Djokovic deported from the country and no longer in the mix.

“I have a great net game, and most of the players don’t have the ability to come to the net the way I do and to cover the court and win a lot of points with volleys,” the Greek told reporters.