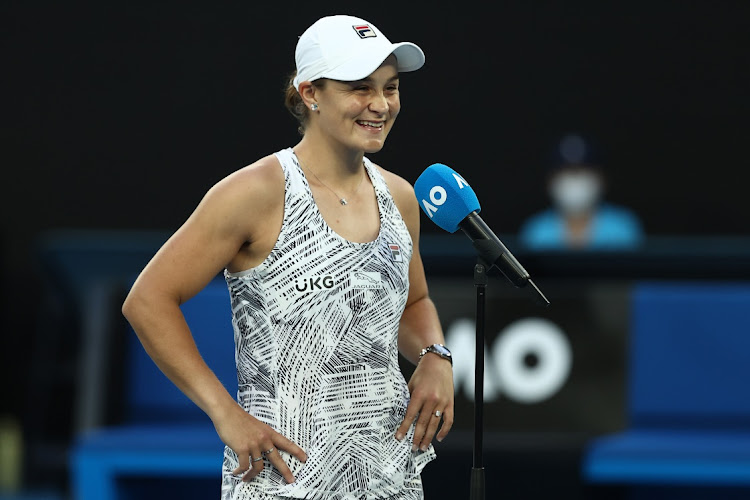 Ashleigh Barty of Australia is interviewed on court after winning her first round singles match against Lesia Tsurenko of Ukraine during day one of the 2022 Australian Open at Melbourne Park on January 17 2022. Picture: GETTY IMAGES/CAMERON SPENCER

Melbourne — Ash Barty showed a good host can lift spirits at the most subdued of parties as she thumped Lesia Tsurenko 6-0 6-1 in a blistering start at the Australian Open on Monday to reach the second round.

With the deportation of men’s champion Novak Djokovic leaving a huge hole at Melbourne Park and a major Covid-19 outbreak gripping the city, Barty’s twilight clinic at Rod Laver Arena gave the tournament a much-needed boost.

Djokovic was heading back to his native Serbia on Monday, but Barty remains as the Grand Slam’s main drawcard, carrying Australia’s hopes of ending a 44-year-old wait for a home champion.

“It feels like it’s an eternity since I’ve been back on this beautiful court,” the world No 1 said. “It’s certainly nice to be back on home soil now and playing as well as I did tonight, it was a lot of fun out here.”

Qualifier Tsurenko might have cared to disagree. Though a seasoned tour professional and former US Open quarterfinalist, the 32-year-old Ukrainian had no answers as Barty stormed out of the blocks, wrapping up the first set in 24 minutes.

Barty squandered two match points that would have handed Tsurenko the dreaded double-bagel and let another two slide as she served for the match, but the Australian finally sealed it with a booming serve down the T.

The Wimbledon champion has been in rollicking form this season, capturing the Adelaide International in the lead-up for the perfect preparation for her home Slam.

Her serve has improved from handy to virtually impregnable, and she saved two break points against Tsurenko to remain unbroken in four successive matches.

“I’m not one for stats at the best of times,” said Barty. “But I think obviously the last kind of five or six matches I felt like I found a really good rhythm on my service games.

“I’ve been able to serve my way out of some tricky spots.

“Not falling too far behind in service games has been a massive part of my week in Adelaide and again tonight.”

Former semifinalist Barty will continue her bid for a maiden title at Melbourne Park against Italian qualifier Lucia Bronzetti.

Rafa Nadal, the only former champion in the men’s draw, cruised into the second round with a 6-1 6-4 6-2 victory over unseeded American Marcos Giron.

The 2009 champion had warmed up for the Grand Slam by winning his 89th Tour-level title in Melbourne earlier this month. He plays German qualifier Yannick Hanfmann or Australian wild card Thanasi Kokkinakis next.

World No 3 Alexander Zverev battled through a couple of tight sets to defeat compatriot Daniel Altmaier 7-6(3) 6-1 7-6(1) and set up a second-round match against John Millman.

“Not much went to plan today, to be honest, except that I won. You’re not going to play your best tennis all the time, though, unless you’re Roger [Federer] or Rafa [Nadal]," Zverev said.

Sebastian Korda’s disrupted build-up did not appear to hinder his performance in the first round as he dispatched British No 1 Cameron Norrie with relative ease. The unseeded American tested positive for Covid-19 after landing in Adelaide earlier this month and was forced to withdraw from two warm-up tournaments and was confined to hitting tennis balls in his hotel room while isolating.

US teenager Coco Gauff crashed out after an error-strewn performance against China’s Wang Qiang as the 18th seed lost 6-4 6-2.

The 17-year-old Gauff made 38 unforced errors to lose in 73 minutes against the 110th-ranked Chinese, who knocked Serena Williams out of the Australian Open two years ago to reach the fourth round.