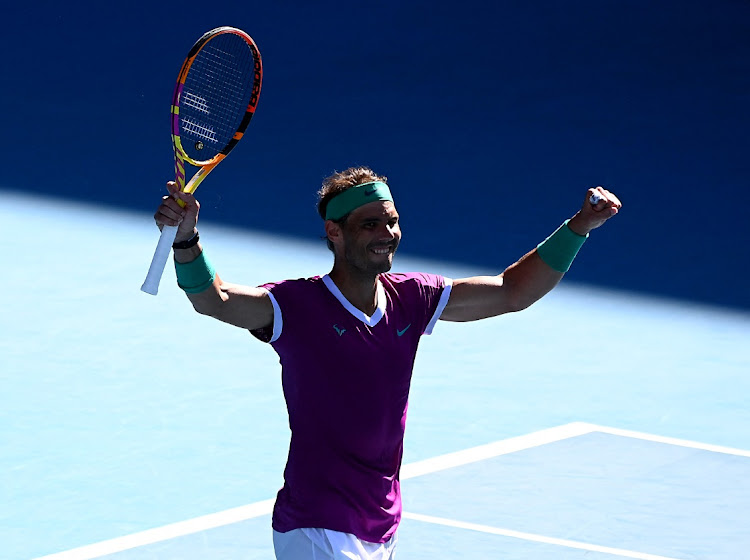 Melbourne — Rafa Nadal survived a mammoth first-set tiebreaker before going on to beat fellow lefty Adrian Mannarino 7-6 (14) 6-2 6-2 and reach the quarterfinals of the Australian Open on Sunday, remaining on course for a men’s record 21st Grand Slam title.

Nadal and the Frenchman traded blows from the baseline during an engrossing 30-point tiebreaker lasting almost half-an-hour. The opening set lasted 1h 21 min.

“Anything could have happened there. I was a little lucky at the end. Everybody knows how mentally [tough] this game is. It was a tough one and after that crazy first set, I think it was so important, the break at the beginning of the second set.”

Mannarino had lost both his previous meetings against Nadal and came into the contest after a demanding third-round victory over Russian Aslan Karatsev in a match that lasted 4h 39 min.

After the energy-sapping first set under the blazing afternoon sun at Melbourne Park’s main showcourt, the 69th-ranked Frenchman wilted as Nadal went on to seal the win with an ace on his first match point.

Nadal’s last defeat by another left-hander in a contested match came in 2017 against Denis Shapovalov, who will be his next opponent after the Canadian saw off German third seed Alexander Zverev in straight sets.

“He has a lot of amazing things in his game, and his results say that. When he’s playing well, it’s very difficult to stop him.”

The only former champion left in the men’s draw, 2009 winner Nadal is tied on 20 Majors with injured Roger Federer and nine-times Melbourne Park winner Novak Djokovic, who was deported before the tournament began.

A second title at Melbourne Park would not only break the three-way tie at the top of men’s tennis but also make Nadal just the second man after Djokovic to win each of the four Grand Slams twice since the sport became professional in 1968.

But his lead-up to the hard court Major has been far from ideal. The 35-year-old returned to the Tour after spending four months on the sidelines due to a long-standing foot problem and also contracted Covid-19 last month.

The world No 1 was able to handle a spirited challenge from the American, proving the steadier player on key points through the 74 min contest.

Though Barty had her stunning streak of 63 consecutive service holds broken, her ability to absorb the power of her 20-year-old rival and draw errors proved critical.

Seeking to become the first local since Chris O’Neil in 1978 to win the Australian Open, Barty will play another American in Jessica Pegula on Wednesday for a spot in the semifinals.

Barty praised Anisimova, whom she defeated in a semifinal at Roland Garros in 2019 on the way to winning the French Open.

Teen sensation stays cool under pressure after Stephens fights back, then moves up a gear to dominate the deciding set
Sport
3 months ago
Next Article